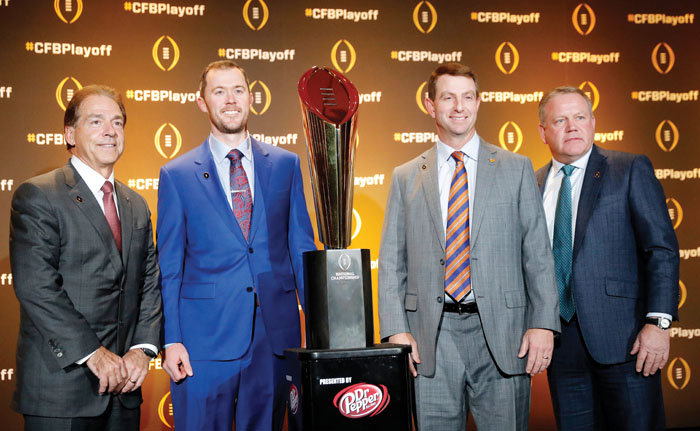 Football coaches Nick Saban, of Alabama; Lincoln Riley, of Oklahoma; Dabo Swinney, of Clemson; and Brian Kelly, of Notre Dame, from left, pose with the college football championship trophy after a news conference Thursday, Dec. 6, 2018, in Atlanta. The four teams are in the College Football Playoff. (AP Photo/John Bazemore)

ATLANTA (AP) — Sitting beside Nick Saban, Lincoln Riley and Dabo Swinney at a gathering of the College Football Playoff coaches, Notre Dame’s Brian Kelly referred to his team as “the new kids on the block.”

The description fit. Saban has guided No. 1 Alabama, the defending champion, to its fifth straight playoff. Swinney and Clemson are making their fourth straight appearance. Riley’s Oklahoma team is in the playoff for the third time in four years.

The Fighting Irish are newcomers, but the playoff is an old dream for one of college football’s most familiar names.

“It’s something we certainly look toward each and every year,” Kelly said Thursday at the College Football Hall of Fame.

Georgia, which made it all the way to last year’s national championship game, took a 35-28 loss to Alabama in the Southeastern Conference championship game. Following the game, Saban said he believed Georgia was one of the nation’s best four teams.

In his final vote in the coaches poll, however, Saban voted for the four teams that actually made the playoff. Georgia was No. 5 in his poll.

Saban stuck by his vote — and his Georgia claim — on Thursday night.

“What this really indicates is the SEC championship game was a playoff game,” he said.

Asked a follow-up question, Saban wouldn’t say Georgia should be one of the playoff teams.

The NCAA says the number of enforced targeting penalties in the Football Bowl Subdivision this season was the same as in 2017, ending four straight years of increased calls.

The final 2017 report originally listed 188 enforced calls, but Redding said the numbers are sometimes adjusted after an offseason review. The NCAA compiles its numbers through reports submitted each week by conferences.

Big Ten and Mid-American Conference coordinator of football officials Bill Carollo said he was pleased to see the targeting penalties level off and the hope is the numbers will come down in 2019.

“Coaches have done a good job at teaching proper hitting (both blocking and tackling) techniques and officials have improved in calling targeting plays as well as reviewing the plays,” Carollo wrote in a text to The Associated Press.  “It’s still our No. 1 concern and our one area we need to improve.”

Redding noted the number of calls was alarming early in the season. In the first two weeks, there were 55 enforced penalties in 164 games compared with 36 through 162 games in 2017.

The Washington native who spent two stints as a Maryland football assistant and also served as the Terrapins’ interim leader for six games in 2015 was introduced Thursday as the school’s full-time coach.

“This was the job I’ve coveted since the day I put a whistle around my neck as a coach,” said Locksley, the Alabama offensive coordinator who Tuesday was named the winner of the Broyles Award as the nation’s top assistant coach. “Some people grow up wanting to be the head coach at the University of Alabama, Michigan, all the storied programs. For Locks, this was it.”

Locksley, who turns 49 on Christmas Day, will remain with the top-ranked Crimson Tide through the College Football Playoff.

He is taking over a Maryland program coming off its most tumultuous season in recent memory.

It has been less than six months since the June 13 death of offensive lineman Jordan McNair, who collapsed from heat stroke May 29 during an offseason workout. Former coach D.J. Durkin was placed on administrative leave on Aug. 11 as investigations were conducted into the circumstances surrounding McNair’s death and allegations of bullying and intimidation by coach and one of his assistants.

The governing board for the state university system decided to reinstate Durkin on Oct. 30, a decision that prompted widespread outrage and protests by players. University president Wallace Loh fired Durkin the next day.

Matt Canada served as the team’s interim coach and was credited with keeping the team together under difficult circumstances and he interviewed for the permanent job, but Maryland instead went with Locksley,

The Terps finished the season 5-7, their fourth consecutive losing season and third year in the last four without a postseason appearance.

“This has been a difficult season for our team,” athletic director Damon Evans said. “They deserve someone who can bring us together, someone who understands what they have gone through, someone who can help them continue to heal.”

Enter Locksley, who endured a personal tragedy of his own. His 25-year-old son Meiko was shot and killed Sept. 3, 2017, in Columbia, Maryland.

“My No. 1 priority and focus will be the health, development and safety as the head of this family,” Locksley said.

It is Locksley’s second full-time head coaching job. He had a rocky tenure on and off the field over parts of three seasons at New Mexico, where he was 2-26. He was suspended for one game in 2009 for an altercation with an assistant coach, and was sued for sexual harassment by an administrative assistant. Those claims were later resolved.

Including his six-game stint as Maryland’s interim coach in 2015, he owns a 3-31 career record.

“I’m so far removed from that New Mexico experience — 10 years and two days from when I was introduced there,” Locksley said. “Who I’ve become as a coach and who I’ve become as a person, as everyone else (does), you mature, you grow. I just spent three years saturated in winning under coach Nick Saban and the Alabama football program.”

Maryland’s football program has struggled to gain traction since joining the Big Ten in 2014. The Terps have gone 13-30 in league play in that span, including a combined 3-17 against East Division powers Michigan, Michigan State, Ohio State and Penn State.

Locksley possesses a reputation as a strong recruiter, particularly in the Washington area, which made him an ideal candidate after such a difficult season.

“We have one of the best areas in the country for talent, and we’re going to work our tails off to keep it right here,” Locksley said.

Big issue: Browns concerned with Newton’s size as they…