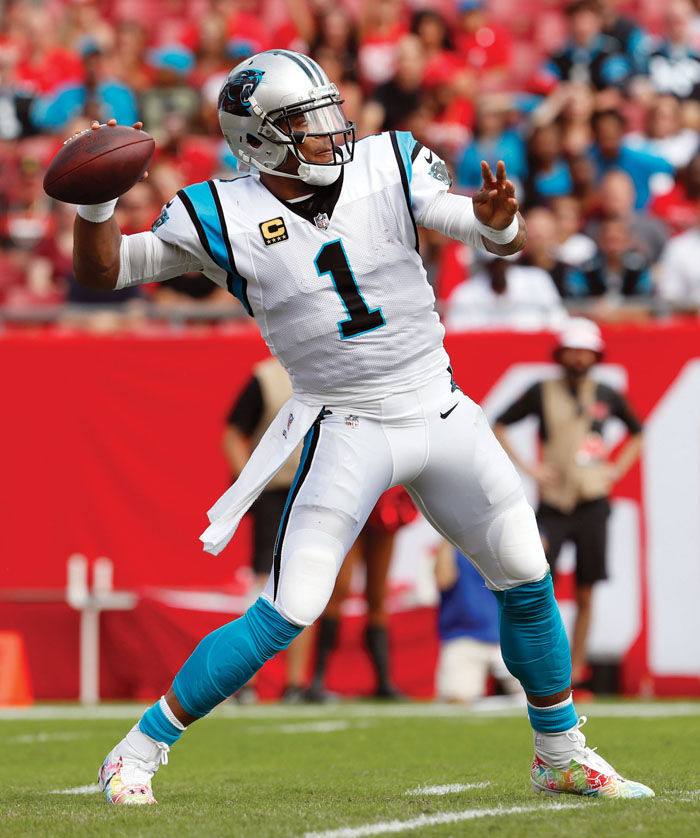 FILE - In this Dec. 2, 2018, file photo, Carolina Panthers quarterback Cam Newton (1) throws a pass against the Tampa Bay Buccaneers during the first half of an NFL football game, in Tampa, Fla. The Panthers play the Cleveland Browns in Cleveland on Sunday. (AP Photo/Mark LoMoglio, File)

CLEVELAND (AP) — During a meeting this week with his defense, Browns interim coach Gregg Williams used star end Myles Garrett as a model.

A 6-foot-4, 270-pound mass of chiseled muscle, power and speed, Garrett cuts an imposing figure. He’s a physical specimen, the kind of athlete that stands out even in a room full of elite humans.

Oh, and he happens to be about the same size as Carolina quarterback Cam Newton.

“I said that he is bigger than Myles,” Williams said. “People said, ‘What?’ I said, ‘There it is. There is your quarterback right here— Myles Garrett. That is the kind of framework that you guys are looking at here.’ We have our work cut out for us.”

One week after failing to contain Houston quarterback Deshaun Watson, the Browns (4-7-1) now have to deal with Newton and the Carolina Panthers (6-6), who have lost four straight games and need a win Sunday to improve their playoff hopes.

Williams has a history with Newton, who has been slowed by a sore right shoulder and has been limited in practice over the past few weeks. When Williams was with New Orleans, he had to plan for Newton twice a year and still seems to have scars from his encounters with the 6-foot-5, 245-pound dual threat.

“He has grown and taken very good steps year by year by year,” Williams said. “(Panther offensive coordinator) Norv (Turner) has done a really good job with the things that they are doing with him. It is back-to-back games with that kind of a quarterback, but more powerful in the pocket. When you are taking a look at getting him down in the pocket, now that is a grown man. It is not a small quarterback.”

Newton is coming off a poor performance in last week’s loss at Tampa Bay. He threw four interceptions and was replaced on the game’s final play by backup Taylor Heinicke, who came in to attempt a Hail Mary that wasn’t answered.

Earlier this week, Newton said he’d be ready to face the Browns and try to get the Panthers back on track. Carolina trails Minnesota by one-half game for the NFC’s second-wild card spot and can’t afford another loss.

With the holiday season approaching, Newton said ending the Panthers’ slide would be wonderful.

“Is Santa listening? I hope he comes early,” said Newton, who needs just 1 passing yard to reach 3,000 for the eighth straight year. “I feel like we are so close. Every week I try to think of certain things that can get me over the hump. There is no denying and faking that you see other teams thriving and you know that we can do the same thing.

Browns rookie quarterback Baker Mayfield is looking to put together a complete game after a half-good performance last Sunday.

Mayfield’s three interceptions in the first half led to the Texans opening a 23-0 lead. He recovered nicely by passing for 351 yards after halftime, and he knows he must be more inconsistent.

With Carolina’s defense underperforming, Panthers coach Ron Rivera has taken play-calling duties away from coordinator Eric Washington. The Panthers have forced just one takeaway in the last four games and have struggled on third down and in the red zone.

“I don’t know if a ton of stuff will be different, but he has a different way of going about things,” Reid said. “He explains why we are doing things and why he likes making a call in a certain situation, the philosophy behind it and how to execute it.”

Greg Olsen’s right foot gave out again last week, and the Panthers will be without the three-time Pro Bowl tight end for the remainder of the season. Olsen, who broke the foot twice in the last two years, ruptured his plantar fascia.

Rookie Ian Thomas and Chris Manhertz replace Olsen. Thomas is considered more of the receiving threat. He was pressed into duty earlier this season with Olsen out, but struggled at times with the intricacies of the offense, including route running. Still, the Panthers love his potential.

Tireless running back Christian McCaffrey has been a one-man wrecking crew for the Panthers recently. He has more catches (53) than any player in the NFL since Week 6 and has already tied last year’s mark with 80 receptions.

Over the last five weeks, McCaffrey has run for 440 yards and four touchdowns and caught 36 passes for 363 yards and four TDs. He needs 137 yards rushing and 337 receiving to become only the third running back to surpass 1,000 yards in both categories. The others are Roger Craig and Marshall Faulk.