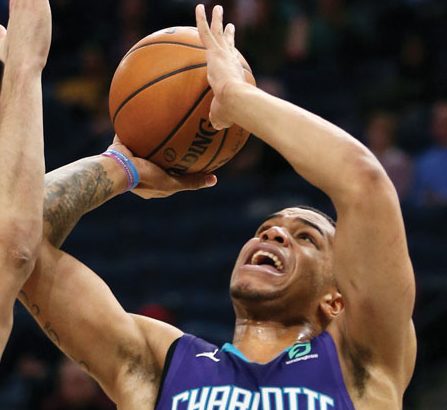 Charlotte's Miles Bridges had 23 to lead the Hornets but it was not enough in the play-in game Tuesday night. (AP File Photo/Stacy Bengs)

A back-and-forth affair turned on another strong defensive half for the Wolves, who limited Charlotte to 40 points on 31.3 percent shooting in the second half. Jeff Teague had a season-high 18 assists, and Taj Gibson added 11 points and 10 rebounds for Minnesota.

Jeremy Lamb had 18 points and 11 rebounds for Charlotte, and Nicholas Batum finished with 18 points. The Hornets have lost five of their past six games.

The Timberwolves came back from a big deficit again. Minnesota recovered from a 19-point deficit for its biggest comeback win of the season Monday night against Houston. Wiggins scored seven straight points at one point for the Wolves in the second quarter as they used a 22-7 run to erase a 15-point deficit.

Towns and Robert Covington helped the Wolves pull away in the fourth. Towns had 11 points during a 22-2 run to take a 17-point lead in the fourth.

Hornets: Marvin Williams was out of the lineup for the first time this season with a right shoulder strain sustained in Sunday’s loss against New Orleans. Williams has started every game at power forward this season. Michael Kidd-Gilchrist started in his place. … Kemba Walker made his 502nd career start for Charlotte, the most of any player in team history. Walker passed Muggsy Bogues, who had made 501 starts. … The Hornets have lost three games in a row for the first time this season. They hadn’t won or lost more than three games in a row all season.

Timberwolves: Minnesota had 11 blocks, one shy of its season high for a single game. …,It was the ninth career game for Wiggins with at least 20 points, five rebounds and five assists. .. The Wolves play 10 of their next 13 games on the road.

CLEVELAND (AP) — Stephen Curry made nine 3-pointers and scored 42 points, Kevin Durant added 25 and the Golden State Warriors came back to face a very different looking Cleveland team for the first time since winning another NBA title, and beat the Cavaliers 129-105 on Wednesday night.

Curry scored nine points in less than a minute midway through the fourth quarter to help the Warriors pull away for their eighth straight over their former Finals rivals.

It was Golden State’s first visit to Cleveland since June, when the Warriors completed a sweep to win their third championship in four years.

NEW YORK (AP) — Paul George scored 25 of his 47 points in a sensational fourth quarter, including a go-ahead 3-pointer with 3.1 seconds left that lifted Oklahoma City past Brooklyn.

George rallied the Thunder from a 23-point deficit and finished a point shy of his career high, leading them to a fourth straight victory in a game they trailed big for much of the way.

Russell Westbrook had his 108th career triple-double to snap a tie with former Nets star and coach Jason Kidd for third in NBA history, finishing with 21 points, 17 assists and 15 rebounds.

TORONTO (AP) — Kawhi Leonard had 36 points, Jonas Valanciunas scored 18 of his season-high 26 in the fourth quarter and Toronto handed Philadelphia its 13th consecutive loss in Canada.

Serge Ibaka added 18 points to help the Raptors bounce back from a loss to Denver to win for the ninth time in 10 games. Toronto is an NBA-best 21-5, and improved to 11-3 at home.

Jimmy Butler scored a season-high 38 points and had 10 rebounds for Philadelphia.

After Terence Ross tied it for Orlando with a 3-pointer with 6.1 seconds left in the fourth quarter, the Nuggets outscored the Magic 9-2 until Nikola Vucevic dunked for the Magic’s first field goal of the overtime session with just 1:04 left.

Towns tied a career high with six blocks and had 12 rebounds. Wiggins tied season highs with six rebounds and five assists. Jeff Teague had a season-high 18 assists, and Taj Gibson added 11 points and 10 rebounds for Minnesota. Jeremy Lamb had 18 points and 11 rebounds for Charlotte, and Nicholas Batum also finished with 18 points.

Anthony Davis had 27 points, a career-high nine assists and five blocks despite twisting his ankle and briefly leaving the court for treatment after stepping on Dorian Finney-Smith’s foot.

Jrue Holiday had 17 points and four steals for New Orleans.

Harrison Barnes had 16 points for Dallas.

John Collins had a career-high 26 points and added 14 rebounds for Atlanta.

Milwaukee countered an opening basket with nine consecutive points and did not trail after that. The Bucks led 30-21 after one quarter, 56-45 at halftime and then opened the third period with a 19-4 run.

Blake Griffin had 31 points for the Pistons.

Memphis held Los Angeles to 34 percent shooting and forced 19 turnovers. Boban Marjanovic led the Clippers with a season-high 19 points and had eight rebounds.