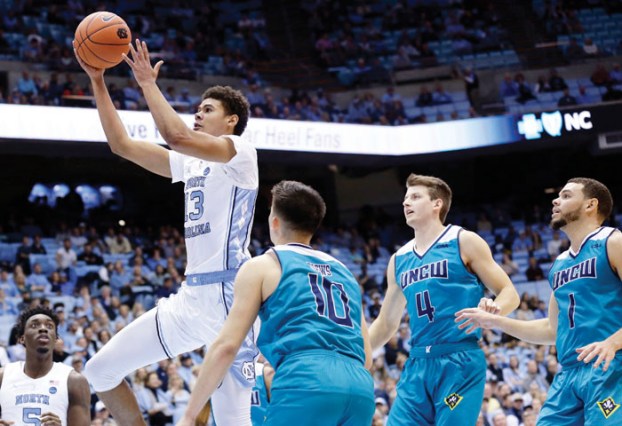 Tar Heels take it to the Seahawks 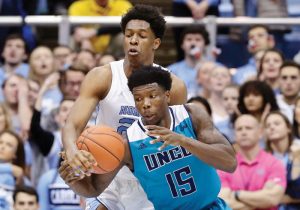 CHAPEL HILL (AP) — North Carolina gave its Hall of Fame coach what he wanted in a dominant second half against an in-state opponent.

The 14th-ranked Tar Heels need it to be the first step during an important month that could give them the chance to sharpen their imperfect play.

Cameron Johnson scored 21 points to help the Tar Heels beat UNC Wilmington 97-69 on Wednesday night, turning a close game into a rout by doing the very things coach Roy Williams has been pushing them to do.

Mainly, that meant playing better on the defensive end, both in harassing ballhandlers and forcing turnovers to get loose in transition. And that made Williams far more at ease than the last time the Tar Heels took the court: last week’s double-digit loss at fifth-ranked Michigan.

“The second half, it felt like we were getting after it,” said freshman Nassir Little, who scored 14 points. “I was in the passing lane like he wants us to be. I got a steal and dunk. That’s something he wants us to get more of. We were boxing out and getting rebounds. He wants us to get out in transition; we were doing that.

“In the second half, I think we really picked it up on what he was asking us to do.”

Jeantal Cylla had 16 points to lead UNC Wilmington, coached by C.B. McGrath — who spent 14 seasons as Williams’ assistant at UNC. The Seahawks (4-6) trailed just 44-39 early in the second half before the shots stopped falling and the Tar Heels got loose in transition to turn the game into a rout.

“The second half was pretty ugly,” McGrath said.

“We competed in the first half and then a couple of things didn’t go our way early in the second half. We got down on ourselves and never recovered.”

UNC Wilmington: Things haven’t been easy in either of the Seahawks’ games against power-conference opponents this season. They lost Nov. 9 at home against Stanford, and that game got away when they went the last 7½ minutes before halftime without a basket. They hung with the Tar Heels for a half before hitting a similar drought, this time nearly seven second-half minutes. And turnovers were again a problem, with the Seahawks committing 25 that led to 34 points after watching the Cardinal score 28 points off 20 turnovers last month.

North Carolina: The Michigan loss left an angry Williams saying he wasn’t doing a good enough job coaching this group to play its best. The good news? The Tar Heels play just four games in December — their fewest since the 1961-62 season under a first-year coach named Dean Smith — so Williams will have plenty of time to massage the flaws out of his team in practice, though players first have to get through a limited schedule in the coming days due to exams.

“There are some things we need to work out and we’ll have that practice time now, so I guess we’ll see how much of a boost that gives us,” Johnson said. “But on the other hand, we kind of know what we need to do.”

Seventh Woods had seven points and three assists while starting at point guard with Coby White sitting due to a sore ankle. Woods has 32 assists and 10 turnovers in seven games.

Williams said he spent several hours watching coverage of the funeral service for former President George H.W. Bush. Williams also told a story about passing on a phone call from Bush because he had a policy of not interrupting a meeting with a player, then calling him back.

“President Bush was a kinder, gentler person that set an example for what we need to be as a country,” Williams said.

UNC Wilmington: The Seahawks visit No. 25 Furman on Dec. 15.

North Carolina: The Tar Heels host top-ranked Gonzaga on Dec. 15 in one of the biggest nonconference games of the college basketball season.

Close for a while, then Duke blows away Hartford