Big win on the road for the Raiders 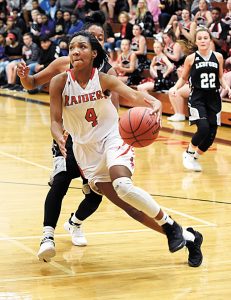 WELCOME — South Rowan’s girls were blown away by hot-shooting Carson on Wednesday, but 24 hours later they redeemed themselves with a big Central Carolina Conference road win at North Davidson.

“The girls really wanted to beat Carson, but the league games are what’s most important,” South’s first-year coach Stacy Ellis said. “I told the girls they needed to flush that Carson game quickly because we had a great opportunity on Thursday to get a conference win. We knew we were going to have to play really well to beat a good team, and that’s what we did. We got off to a good start and kept it going.”

South is 2-2 overall, with county losses to East Rowan and Carson, but the Raiders are 2-0 in the CCC. They also won a one-point decision at home against East Davidson (3-1).

Senior guard Janiya Downs scored 32 points to lead the Raiders, including five free throws in the overtime period. It’s the ninth time in her career that Downs has scored 30 or more. She has 1,625 career points and is on track to shatter Avery Locklear’s school scoring record of 1,795 points that was set in 2015 when Downs was an eighth-grader at Corriher-Lipe. Downs is averaging 23.3 points per game this season.

“Janiya is a great player, but what’s most exciting for me is to watch how she’s leading this young group of girls we have,” Ellis said. “She’s really taken (freshman) Bethany Rymer under his wing, telling her what she needs her to do and where she needs her to be.”

Rymer was in the right place often on Thursday, pouring in a season-high 22 points.

The other key player for South was junior co-captain Madison McGuire. She scored 12.

“Madison made two huge 3-pointers in the overtime to put us in front,” Ellis said.

“That freshman guard (Hege) is a tough player,” Ellis said. “She’s a good shooter and a good ball-handler and plays with a lot of power.”

South missed some free throws when it had a chance to close the deal in regulation, but the Raiders got it done in overtime.

“I think we were kind of lucky to get out of there with a win, but we’ll take it,” Ellis said.