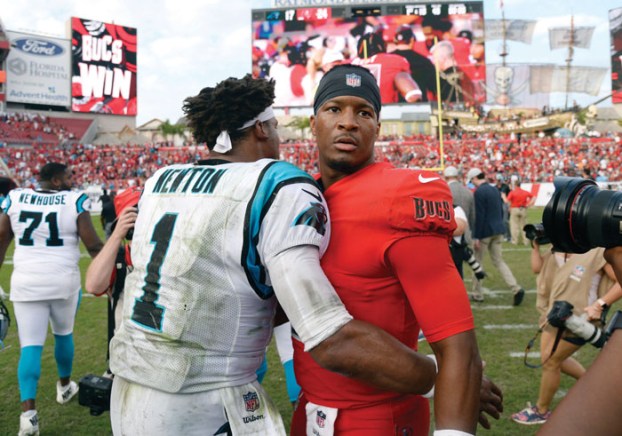 The Panthers quarterback said he’ll be ready to play against the Browns on Sunday despite lingering pain in his throwing shoulder. But coach Ron Rivera wasn’t quite as certain Wednesday, leaving the door open by saying, “We’ll see. We’re not even to Friday.”

More than 20 months after having surgery to repair a partially torn rotator cuff, the 6-foot-5, 245-pound giant of a quarterback is still experiencing pain and discomfort in his right shoulder that is limiting what he can do on the field. Offensive coordinator Norv Turner has limited Newton’s downfield throws this season and twice replaced the league’s 2015 MVP with backup Taylor Heinicke when lining up for Hail Mary passes.

Newton reps were limited in practice Wednesday — as they have been for several weeks — as part of Rivera calls “the new normal.”

The Panthers (6-6) are a half-game behind the Vikings in the race for the second NFC wild card spot following a disappointing 24-17 loss to the Buccaneers last Sunday in which Newton was intercepted four times.

Newton has thrown downfield fewer times this year than at any point in his career. That’s by design in order to prevent his shoulder from wearing out. As a result, he’s completing a career-high 69.5 percent of his passes, mostly because of the used of check-downs and short passes underneath the coverage.

Rivera said Newton and the offensive coaches are “doing the best they can” to manage the situation. He said it’s critical that Newton communicates with coaches on how he feels.

“We have to make decisions going forward as to how the offense has to click,” Rivera said. “He has to be very transparent with Norv when it comes to the plays” he can run.

When asked if he’ll need to get his shoulder addressed medically once again after the season, Newton said, “among other things.”

He wouldn’t elaborate in his weekly news conference on what other parts of his body might need to be addressed, saying “c’mon, you know people are looking at this tape.”

When pressed on whether he will need surgery, Newton grinned and said, “I can neither confirm nor deny.”

Newton also declined to say if there’s a particular play in which he reinjured the shoulder or if it is simply the result of continued wear and tear on the body.

Regardless, Newton said he doesn’t regret having the surgery in March of 2017, saying it “needed to be done.”

But he also acknowledged he didn’t think he would still be having problems with his shoulder at this point in his NFL career.

“I would not have expected me to still have the kind of things that are lingering from that, but it is what it is,” Newton said. “It’s about managing pain and understanding that you have a job to do and a responsibility to put your best product out on the field. I want to do that not only for myself but this team.”

From staff reports Alex Allen (Carson) had 12 points and six rebounds for Lynchburg in Wednesday’s 80-54 win against Randolph.... read more