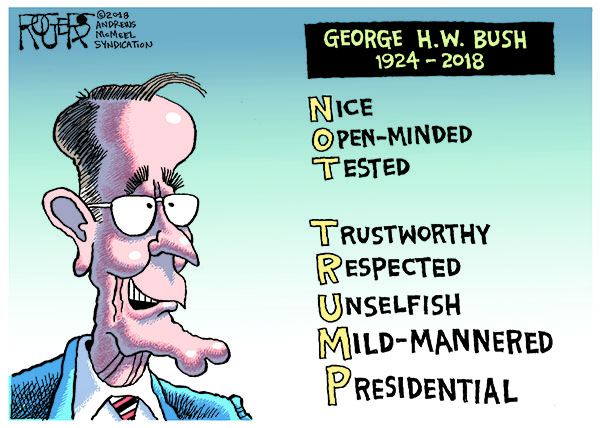 David Shribman: An American life, a life of purpose 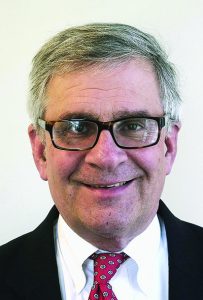 So endeth one of the great American lives.

It wasn’t the Ragged Dick up-from-poverty American life of a Horatio Alger bootblack; George H.W. Bush was born to privilege and profited from primogeniture. It wasn’t the Mr.-Smith-Goes-to-Washington American life of a James Stewart ingenue; he was the son of a senator (and then the father of a president). It wasn’t the rusticated eloquence of an Andrew Jackson of the Carolina Waxhaws or an Abraham Lincoln of the Indiana farmlands; the 41st president was the product of Phillips Academy Andover and of the Cole Porter anthems of Yale, and yet he mangled the English language in a goofy, sometimes incomprehensible way.

And it wasn’t a parade of triumphs celebrated by a nation that loves a winner: He lost a brutal 1970 Senate race, a trying 1980 presidential-nomination campaign and an excruciating 1992 battle for re-election as president. He also witnessed his son, former Florida Gov. Jeb Bush, get defeated in the 2016 GOP primaries against Donald Trump.

But Bush lived a great American life, one of purpose (a word of unusual prominence in his speeches and letters) and of service (the leitmotif of his 94 years). He was the quintessential citizen of the American 20th century, his life shaped by World War II, the Cold War, Watergate, the energy industry, the fall of communism, the resurgence of conservatism and the emergence of a Republican Solid South. As he aged, with a grace that defied the timbre of the times, he lived to see many of the buoys of his life, and of American life — global engagement, collaboration in multinational alliances, government thrift — questioned or repudiated.

He was courtly yet gave no quarter to rivals. (“What one said or did to rise to ultimate authority mattered less to Bush,” his biographer, Jon Meacham wrote, “than whether one was principled and selfless once one was in command.”) He was clinical in his analyses yet mushy in his relationships. (Throughout his life he employed the line his daughter, who died at age 3 of leukemia, sowed in the family lexicon and established as a family talisman: “I love you more than tongue can tell.”)

He conducted range wars with his rivals but reconciled with all of them. His 1988 GOP nomination battle against Sen. Bob Dole was one of the bitter political fights of the age. In their 90s, the two men spoke warmly of each other and regularly exchanged birthday wishes.

He resented the public appeal and intelligence of his 1992 opponent, Arkansas Gov. Bill Clinton (“He’s better at facts-figures than I am,” he told the speechwriter Peggy Noonan. “I’m better at life”). He cultivated a post-presidential relationship with Clinton matched only by John Adams and the man who defeated him for re-election in 1800, Thomas Jefferson.

But perhaps the most affecting reconciliation — one no correspondent who covered Bush ever forgot — came with Washington Post reporter Ann Devroy. For months, Devroy tormented the president with a daily barrage of leaks and revelations that infuriated Bush. Then Devroy was stricken with the cancer that eventually would claim her life. To the M.D. Anderson cancer complex came a letter from Bush: “I want you to win this battle. I want the same toughness that angered me and frustrated me to a fare-thee-well at times to see you through your fight.”

Bush may not have changed his principles, but he did change his mind. As a young congressman, he opposed civil-rights legislation but four years later infuriated his Texas constituents by supporting a fair-housing bill. He abandoned his New Orleans GOP convention vow — “No new taxes! — to reach the 1990 budget agreement that cut the deficit, but in empowering GOP insurgents led by Rep. Newt Gingrich, set in motion a fateful Republican rebellion that would end the reign of the old guard of the party that Bush personified.

George H.W. Bush was the central figure in a dynasty accounting for four years in the House, 10 in the Senate, 16 as governor, a dozen as president and five campaigns on the national political stage — a family record arguably surpassing both the Adamses and the Kennedys.

Bush was far more vigorous than the president who identified with American vigor (Kennedy), which is why his decline in his 10th decade was so poignant. Repeatedly hospitalized, Bush neared death on several occasions. Penny Circle, Gerald Ford’s longtime aide, urged Jean Becker, Bush’s, to leave her post before the president’s demise. The end, she counseled, would be too much to bear. But try as she might, Becker could not abandon Bush. It was she who alerted the world of Bush’s death, and she who planned the national farewell that is unfolding now.

Bush’s son, George W. Bush, was tasked with giving the centerpiece funeral tribute. As long ago as August, he began preparing his remarks, and beseeched the other eulogists to submit their remarks to him so as to avoid repetitive themes. When the request was transmitted to former Prime Minister Brian Mulroney of Canada, a longtime boon companion of Bush, the answer came back swiftly: “Done.”

In announcing his intention to run for president in 1987, then-Vice President Bush spoke of “prosperity with a purpose.” It was economic distress that denied him a second term. In that same speech, given amid red, white and blue bunting in an otherwise sterile Houston hotel, he delivered perhaps the most accurate statement of self-awareness in American political history: “I am not a mystic, and I do not yearn to lead a crusade. My ambitions are perhaps less dramatic, but they are not less profound.”

And yet the most profound utterings of the Bush heart came not in set-piece speeches and certainly not in fumbling debate settings. They came in letters, thousands of them, typed himself with occasional misspellings. In his last hours as president, Bush wrote a friend from the Resolute desk in the Oval Office:

“I feel the same sense of wonder and majesty about this office today as I did when I first walked in here. I’ve tried to serve here with no taint or dishonor; no conflict of interest; nothing to sully this beautiful place and this job.”

Michael Flynn has been waiting for more than a year to be sentenced. The retired three-star Army general, who spent... read more