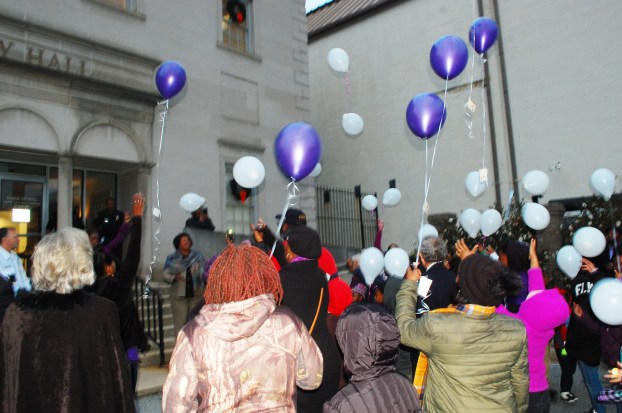 Members of the community release balloons outside of City Hall in memory of A'yanna Allen, who was killed Dec. 4, 2016, ahead of Tuesday's city council meeting.

SALISBURY — Dozens of purple and white balloons were released ahead of the City Council meeting on Tuesday for the anniversary of A’yanna Allen’s death two years ago.

Seven-year-old A’yanna Janae Allen was shot and killed in a drive-by shooting Dec. 4, 2016, as she slept. The case is still unsolved.

Family members, friends and others held balloons as they listened to A’yanna’s mother and grandmother, April Woodberry, and Mayor Al Heggins talk. Afterward, the crowd released the purple and white balloons into the blue sky.

“Her favorite color is purple,” April Woodberry said. “Today was her second anniversary. We released balloons on her anniversary.”

At the City Council meeting, Heggins paid tribute to A’yanna and said the community needs to continue to work to ensure this doesn’t happen again.

“We lost a child in our community,” Heggins said. “In the African culture, the Masai tribe, the warriors ask each other and other members of the community how they measure the health of their community by saying, ‘How are the children?’ How are the children? I ask us. I ask our community. I ask our city as an organization. How are our children? Are we doing everything that we need to do to make sure we are providing a safe environment for our children? When we can absolutely say yes without a doubt, then we know we have hit the mark.”

Heggins then invited the family up front.

Shequita Woodberry asked that anyone with information about the murder to talk to police.

She said the release of balloons and the happiness in the air is what A’yanna would’ve wanted.

“Today meant a lot to me,” Shequita Woodberry. “I’m glad everyone came out. That’s what matters the most.”

SALISBURY — At least one man was injured Tuesday in a three-vehicle crash on Old Concord Road. Two pickups and... read more