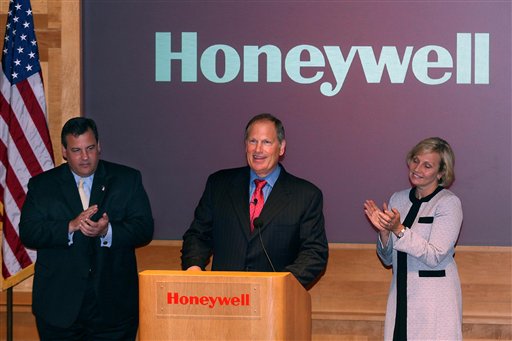 In 2010, Honeywell Chairman and CEO Dave Cote, center, speaks as Gov. Chris Christie, left, and Lt. Governor Kim Guadagno applaud Honeywell's intention to keep its headquarters in New Jersey despite an offer to move. Honeywell now has decided to move its HQ to Charlotte. AP photo

RALEIGH — If there’s one thing that can unite Republicans and Democrats in a polarized state legislature, it’s handing out tax breaks to big corporations looking to move jobs to North Carolina.

Last week, the legislature agreed — for the second time this year — to increase the size of the corporate jackpot. The dollar figures approved just a few months earlier for “transformative” corporate relocations simply weren’t generous enough.

You can’t win a shiny corporate headquarters if you only cough up $6,500 per job, per year, lawmakers were told. So the honorables on Jones Street quickly agreed to more than double that figure to $16,000 per job, per year. The legislation was rushed through in a few short days, powered by claims that the unnamed Big Important Company would go somewhere else if they didn’t get the money.

With so much generosity and haste, I figured we must be on the verge of something huge. Amazon had already turned North Carolina down, but maybe some other company was ready to bring 50,000 jobs? Maybe it would be Apple’s new headquarters, which has promised up to 10,000 jobs?

Nope. The mystery company is Honeywell, a tech manufacturer that plans to relocate a couple hundred employees to Charlotte next year, with a promise to have 750 workers there by 2024.

Details of the state’s incentives package hadn’t been released as I write this, but the state money will come on top of $46 million in incentives from Charlotte and Mecklenburg County. Regardless, it’s a lot of money to fill a few floors of a high-rise office building.

Proponents of the increased incentives argue that these companies would go to another state if they don’t get the money. They’re right — competing states are turning incentives into an arms race, and if we don’t pony up, someone else will.

Supporters also say North Carolina’s incentives don’t strain the state budget. Instead of an upfront payment, companies get repaid a percentage of the taxes they owe for newly created positions. The argument is that the state wouldn’t get any of that tax revenue if the jobs went elsewhere, so even with tax breaks it’s a net gain.

Rep. Jonathan Jordan, R-Ashe, isn’t buying it. He led a odd mix of 21 of the most conservative House Republicans and two of the most liberal Democrats in opposing the incentives bill last week, calling it “one of the biggest corporate welfare and crony capital bills I think I’ve ever seen.”

Jordan and others correctly pointed out that incentives are inherently unfair to small businesses. An auto repair shop won’t get a tax break when it expands and hires three new mechanics. That shop owner’s tax payments will fund some of the government services that Fortune 500 Honeywell gets for a discount.

That’s because jobs announcements are like crack cocaine for politicians. The cost of incentives keeps going up, but so far there’s been no amount too large. Gov. Roy Cooper and Republican legislative leaders are addicted to taking credit for new jobs. Ribbon cuttings and groundbreaking ceremonies are their Super Bowl.

These guys were willing to give $2 billion to Amazon, one of the wealthiest countries in the world. That’s an insane amount equivalent to about 10 percent of the state budget.

It’s time for our leaders to take a closer look at incentives — not just in a rushed legislative session when a particular company is on the line.

How much of a giveaway is too much? Should we direct more incentives to struggling rural communities instead of Charlotte and Raleigh, which will keep adding new jobs regardless? And if we keep handing out incentives like candy, can we also reward small businesses when they create jobs?