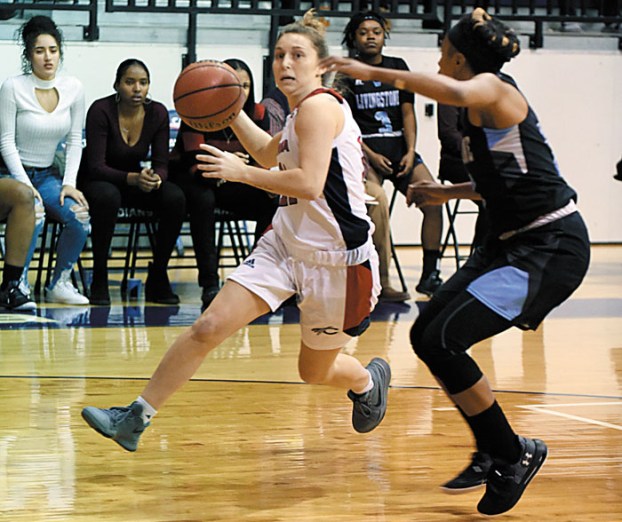 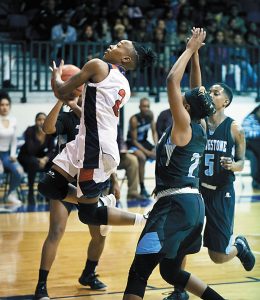 SALISBURY — Sometimes one spare part is all it takes to ignite a team’s engine.

“I’m just going to be honest. Madi Hallman is a special kid,” winning coach Terrence Baxter said at Goodman Gym, where Catawba (4-3) won for the fourth time in its last five games. “If her feet were healthy, we’d be talking about her every game. She is what we call a basketball player.”

Hallman, a junior guard who plays with a fractured bone in each foot, was impossible to ignore. Sophomore Talia Barnes led the Indians with 19 points and teammate Taisha DeShazo contributed 16 points and nine rebounds — but it was Hallman who rolled down the windows and turned up the music.

“Guess I was just feeling it,” said Hallman, an East Davidson graduate who jumped off the bench, buried three 3-pointers and scored 11 points during a decisive, two-and-a-half-minute spurt in the opening quarter. “It felt like I was shooting free throws. Everything was just falling.”

Catawba shot 6-for-9 from three-point range in the opening quarter to erase an early 7-3 deficit. Hallman went 4-for-4 from beyond the arc and finished with 14 points in 14 minutes. Junior Daisa Harris paced Livingstone (3-5) with a game-best 22 points while guard Adel Allen netted 15.

“It’s just a disappointing night,” said third-year LC coach Tiffany Silver. “Nothing clicked. I don’t think we ever got into the flow of the game. I don’t know why, but we looked winded from the beginning.”

Catawba used a 15-4 scoring spree to close a frantic first period with a 34-20 lead. Hallman’s third 3-ball — a catch-and-shoot bomb from the right corner — gave the hosts a 14-12 edge they never relinquished. Anna Gardner stuck a pair of threes in the quarter and Elizabeth Webb capped the opening stanza with a long-distance exclamation point with five seconds on the clock.

“We talked about starting fast before the game,” said Baxter. “We wanted to win the first quarter. We’ve been starting slow, so I got on them today about getting off to a quick start. And God almighty, did we come out ready.”

It represented a deviation from normal for Catawba, which averaged just under 67 points-per-game through its first six outings. By halftime, it owned a 53-30 lead.

“We knew they’re a rival from right down the street,” Barnes said after shooting 8-for-11 from the field and collecting eight rebounds. “And we knew they played some good, high-scoring first quarters. So we played faster than usual. They tried to keep up with our pace, but I think they got tired.”

Silver said the Blue Bears “never played our game,” and added: “One of our things is our speed, so for a team to be quicker than us down the floor — offensively or defensively — is not something we expect to happen.”

Neither was a sub-par performance by Harris, the energetic 5-foot-7 guard who averages 23.4 points-per-night. Though she shot 9-for-18 from the field, she turned the ball over six times and was plagued by foul trouble.

“I wasn’t able to do what I wanted the whole game,” Harris said. “It’s all things I can control. Our team just didn’t give the effort we normally give, didn’t run the floor, didn’t get back on defense.”

The Indians led by as many as 34 points when DeShazo sank a pair of free throws with 8:50 remaining. Barnes scored the last of her points late in the third quarter when she took a no-look pass from Gardner and soared down the lane for a layup.

Catawba’s defense, meanwhile, was tougher than Harvard Law. It forced 22 turnovers, limited the Blue Bears to 19 field goals and held Livingstone to an unsightly 31.1 shooting percentage.

“I love how we responded defensively,” Baxter said. “We’re understanding the scouting report. We know who can shoot it and who can’t. We’re taking charges on the drives and standing up to shooters. That’s being a smart team.”

A team with an invaluable spare part.

A little sluggish, but Salisbury boys prevail on W. Davidson

By David Shaw sports@salisburypost.com SALISBURY — The following is not a misprint: “Sometimes you can win and still lose.” That’s... read more