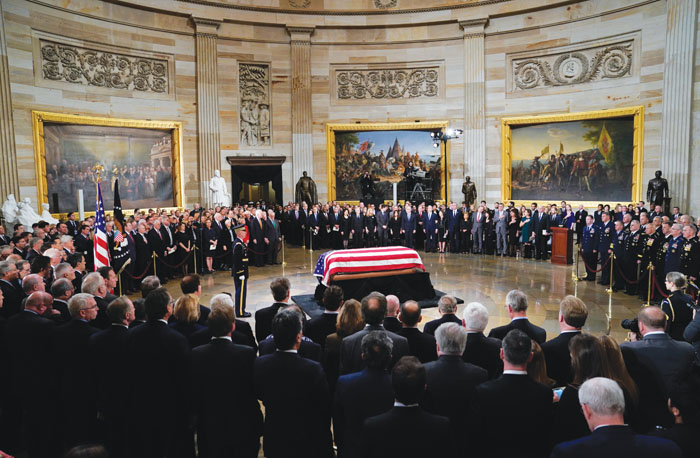 SALISBURY — Through emailed statements, tweets and other means, local public figures took pause this weekend to reflect on the passing of former President George H.W. Bush.

The 41st president passed away Friday night at his home in Houston at age 94. He was surrounded by family, including his son and daughter-in-law, Neil and Maria Bush; his grandson, Pierce Bush; and his longtime friend, former Secretary of State James Baker.

Bush’s death followed that of his wife, Barbara, in April.

Congressmen and senators who represent Rowan County heralded Bush as a man of renown, character and service.

“We said goodbye to one of the most storied presidents in U.S. history last night in George H.W. Bush,” said Rep. Ted Budd, R-13, via Twitter on Saturday.

Rep. Richard Hudson, R-8, said he and his wife were saddened to learn of Bush’s passing and extended sympathy and condolences to the former president’s family.

“President Bush lived a full life — one dedicated to his family, our country and God,” Hudson said. “May he rest in peace.”

Sen. Thom Tillis, R-N.C., said Bush would be “long remembered for dedicating his life to protecting and bettering the country he loved.”

Tillis, like Budd, cited the former president’s service as a Navy pilot, as well as his role in ending the Cold War.

“He always made the tough decisions and put the nation’s interests first,” Tillis said. “A true testament to his character was his ability to befriend his old political rivals, a reminder that despite our differences, more unites the American people, including its leaders, than divides us.”

In a joint statement, former Sens. Elizabeth and Bob Dole called Bush a “cherished servant leader” and a “man for all seasons.”

Elizabeth Dole served as the secretary of labor during Bush’s single term as president.

The Doles said they have fond memories of Bush and his wife, Barbara.

“We smile when we recall the photographs of President Bush and his beloved Barbara riding their bicycles as they forged new paths of friendship during their years in China or the skydiving adventures to celebrate his birthday,” they said.

The joint statement also praised Bush for his work creating the Points of Light Foundation in 1990, an organization that promotes volunteer work.

“He brought wisdom, a keen sense of mission and diplomacy, incomparable patriotism, along with compassion and humanity to each and every assignment he accepted on behalf of the American people,” the statement read. “… God bless this great man of faith and hold our dear friend close.”