Goodbye to the quiet president 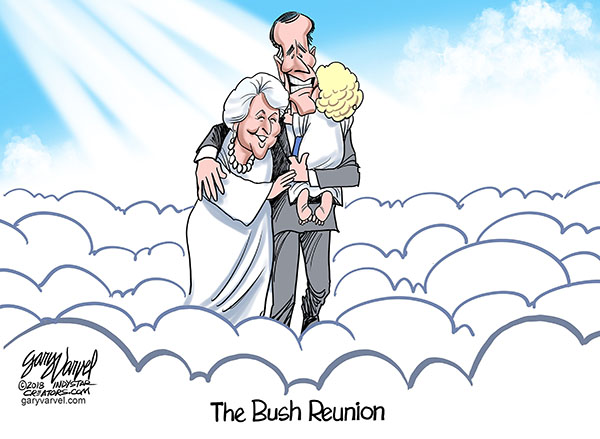 By John H. Sununu
Special To The Washington Post

President George H.W. Bush always considered Lou Gehrig, the Hall of Fame baseball player for the New York Yankees, to be one of his greatest heroes. No doubt, this admiration stemmed in part from Bush’s own baseball career. Like Gehrig, Bush played as a left-handed first baseman, for the Yale baseball team.

But more substantially, Gehrig’s career closely mirrored that of Bush. Gehrig played in the shadow of the legendary Babe Ruth, much like Bush did in the shadow of his partner Ronald Reagan. And like Gehrig, Bush operated more comfortably as the soft-spoken member of his partnership. As he said in his 1988 Republican convention acceptance speech: “I am a quiet man, but I hear the quiet people others don’t.”

Bush, our 41st president of the United States and my friend, died on Nov. 30 at age 94. Although he would never be comfortable taking credit for the success of his life, most historians now agree that Bush was a great president who accomplished great things. He helped make America safer and the world more stable and more prosperous than ever before in history.

When Bush entered the White House in 1989, he faced many issues that had been lingering for decades: budget deficits, the struggle against communism, instability in Latin America, social inequality, threats to the environment, and struggling schools throughout the country. But he faced them as any former fighter pilot would, telling the American people: “I am a man who sees life in terms of missions – missions defined, and missions completed.”

On the international stage, he not only orchestrated one of the largest and most effective military campaigns in history, to drive Saddam Hussein from Kuwait, but he also artfully led the world through the most dramatic and remarkable political transformations of the modern era: the fall of the Berlin Wall, the reunification of Germany, the restoration of democracy in Eastern Europe and the collapse of the Soviet Union. Bush’s quiet, skillful and steadfast guidance was exactly the kind of leadership America needed as it stepped onto the stage as the world’s lone superpower.

For too long, those international triumphs overshadowed Bush’s equally significant and equally great performance on the domestic side. Though he served only a single term, he had an amazing record in terms of legislation proposed and passed. Except for Franklin D. Roosevelt’s legislative blitz during the Great Depression, and Lyndon B. Johnson’s masterful and opportunistic policymaking run in the aftermath of the assassination of President John F. Kennedy, the domestic legislative record of George H.W. Bush is arguably the most prolific, impactful and precedent-setting of all the modern presidencies.

Bush signed into law more than a dozen major pieces of domestic legislation during his single term, including the 1990 budget bill, energy deregulation, the Clean Air Act, the 1990 farm bill, his crime bill, the 1991 Civil Rights Act and the Americans With Disabilities Act. He personally guided his policy team and sweated out the details just as diligently as he did on foreign policy.

He also produced the first set of national performance goals to spur the improvement of education in our K-12 schools, and he passed precedent-setting child-care legislation and led the effort to resuscitate the savings-and-loan industry, including an overhaul of the Federal Deposit Insurance Corp. after the system’s collapse. He also helped to reinvigorate the economies of Latin America under the Brady plan and negotiated the North American Free Trade Agreement. His budget and his policies set the stage for our fiscal prosperity of the 1990s.

And he accomplished all of this despite a heavily partisan, Democratic-controlled Congress. Throughout his term, the opposition dominated the legislative branch, with majorities as high as 260 to 175 in the House and 55 to 45 in the Senate.

His achievements brought forth a new era of global opportunity dramatically different from the one he and Reagan inherited in 1981. But it was that quiet Bush style that helped make such a dramatic transformation possible.

Consider the fall of the Berlin Wall. That day, we quickly arranged a press availability in the Oval Office where the president cautiously expressed appreciation for what had been achieved, but noting there was still a long way to go.

The media and his political opponents immediately criticized him for not being jubilant and declaring total victory over the Soviets. But Bush knew that it was not over yet. He knew that Soviet leader Mikhail Gorbachev was at risk of being overthrown by hard-liners who would use gloating by Bush to charge Gorbachev with embarrassing Mother Russia. Gorbachev confirmed as much in his memoirs, emphasizing that if Bush had not been humble in triumph, the entire process of transformation could have been undone.

As president, George H.W. Bush laid a solid foundation for his successors to build on. Whether we have the fortitude and discipline to eventually do so remains to be seen.

Thank you, President Bush, for defending my rights