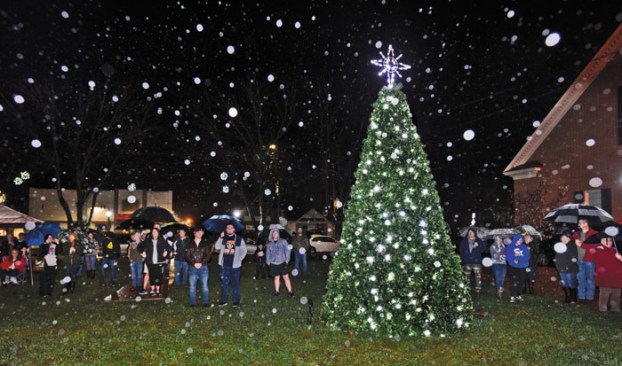 The China Grove Christmas Tree lighting in the rain. The rain drops reflected as white spots back into the camera. photo by Wayne Hinshaw, for the Salisbury Post

CHINA GROVE — The stage lights dimmed and the countdown began to a flip of the switch at the China Grove Christmas tree lighting Saturday. This year, the daughters of Mayor Lee Withers did the honors.

This is the third year for the tree lighting, which is held at Hannah Park.

It’s the first year the tree lighting was held under a new covered stage.

Withers said that although the South Rowan Christmas Parade was held before Thanksgiving, the tree lighting means Christmas is near.

“This is the event that allows the town to say ‘Merry Christmas from China Grove,'” Withers said. “This is a great event to kick off the Christmas season.”

Victor Sever attended the tree lighting for the first time to support her daughter, who is part of the Carson High School honors chorus.

“It’s beautiful. It’s great, and it’s a great way to bring the community out and the schools out to share their gifts with the community,” Sever said.

She said it’s also a way of sharing what the holidays are all about.

Lewis and Kathy Hall attended the lighting ceremony for the first time and planned to have dinner at a local restaurant with their family afterward.

The only thing missing, Lewis said, was snow.

“It’s good to bring people to our town, and it’s a kickoff to Christmas,” said Angie Chrismon.

Joy Rodgers attended to show support for her niece, a member of the Carson High chorus. Along with her sister, Rodgers stood huddled under an umbrella.

The crowd this year may have been smaller than in the past because of the rain.

Megan Wyatt, the Carson choral director, was excited to have her students perform.

“Any chance we get to perform helps us make better performers,” Wyatt said.

There are 38 students in the honors chorus.

SALISBURY — Someone should check Randy Elium’s birth certificate and make sure his real name isn’t John Deere. No one... read more