Virginia’s legislature, and other hurdles, remain obstacles for ERA 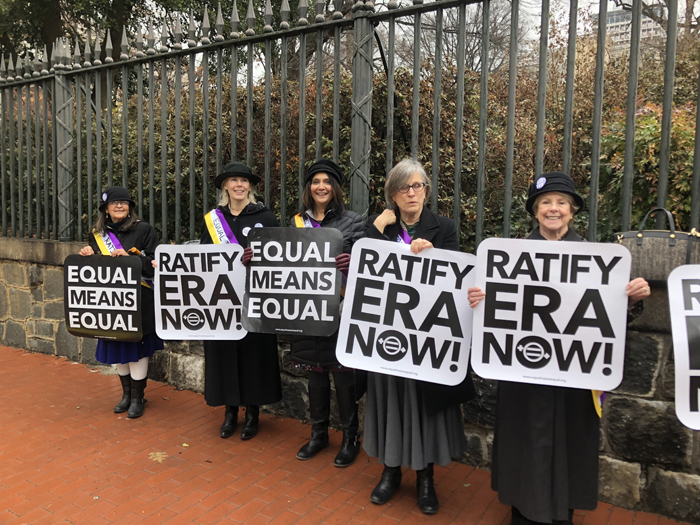 Activists from a variety of women's organizations demonstrate for ratification of the Equal Rights Amendment in February outside the Virginia state Capitol in Richmond, Va. Patricia Sullivan/Washington Post

The Equal Rights Amendment, that artifact from the culture wars of the 1970s and 1980s, could have an unlikely savior: the Old South commonwealth lately known for battles over white supremacy rallies and Confederate statues.

Virginia is changing, with more women elected to the General Assembly and Congress in the past two years and a charged-up electorate of women voters. ERA supporters say the time is right to reverse 46 years of failing to endorse the proposed constitutional amendment, which prohibits discrimination based on gender.

“We know we have the votes,” said Delegate Jennifer Carroll Foy, D-Woodbridge, the chief sponsor of the House version. “There is definitely interest on both sides.”

But even if Virginia becomes the 38th state to ratify the ERA — the three-quarters majority required for ratification — the long-sought amendment still faces major hurdles before it can become part of the Constitution.

For one thing, the deadline for ratification came and went in 1982. For another, five states that ratified the amendment later rescinded their votes — though courts have not ruled on whether those rescissions are valid.

“We may end up facing a Supreme Court challenge. And we’re ready,” said U.S. Rep. Carolyn Maloney, D-N.Y. “We’re covering all our bases so we have the best chance possible to finally put women’s equality in the Constitution — where it belongs.”

Anne Schlafly Cori, chairwoman of the Eagle Forum and daughter of the late Phyllis Schlafly, said her organization remains opposed to the ERA and plans to lobby Virginia legislators against ratification when the legislature convenes in January.

“The passage of time has not made the ERA any better,” said Cori, who believes the amendment could be used to eliminate the separation of the sexes in school athletic programs, prisons and elsewhere. “It would introduce dangerous changes to our society that people should be aware of.”

Congress gave the states seven years to ratify the ERA when it passed the measure in 1972. That deadline was extended to 1982, but by then only 35 states had voted in support.

The Nevada legislature ratified the amendment in 2017, as the nation was seeing a surge of political activism by women inspired by the #MeToo movement and the 2016 presidential election. The Illinois legislature followed suit in May.

Proponents say Congress could extend the deadline again or remove it entirely, noting that the 27th amendment, which bars Congress from voting on its own pay raises, was ratified 202 years after it was first introduced.

They also note that because the deadline was not within the amendment text, Congress has the authority to repeal both the 1979 and 1982 deadlines.

But opponents point out that Idaho, Kentucky, Nebraska, South Dakota and Tennessee rescinded their ratification votes between 1973 and 1979, a result of a political backlash and uncertainty of the ERA’s potential impact on everything from abortion to restrooms.

A challenge to the Idaho vote died in 1982 at the U.S. Supreme Court — which declined to hear it since the ratification deadline had passed.

Eleanor Smeal, who has been involved in the ERA strategy fights since the 1970s, said advocates are geared up for a renewed national battle if Virginia lawmakers push the amendment through.

“I think one can see one major trend,” said Smeal, president and co-founder of the Feminist Majority Foundation. “A drum is beating for the ERA, and it’s time is coming.”

In Virginia, supporters of the amendment are emphasizing its bipartisan appeal, particularly among the suburban voters who have become the state’s driving political force.

The bill has failed to pass the General Assembly multiple times since 1972, although it cleared the Senate five times in the past seven years. In February, it died in committee in both chambers, even though a majority of lawmakers in both the House and the Senate had signed on as co-sponsors.

Katie Hornung, campaign coordinator for VAratifyERA, said the failure was a matter of inadequate communication. Neither the Democratic nor Republican leadership understood that a majority of the legislators had signed on to co-sponsor the effort, she said, leaving them to believe the bill had less support than it actually did.

Advocates staged a statewide bus tour this fall that Foy said was intended to “energize and galvanize” support for the amendment. “Women are coming up out of the shadows, they are making their voices heard and they are voting,” she said.

At least some Republicans seem to be getting the message. Last session, Delegate Roxann Robinson, R-Midlothian, was the lead sponsor of an ERA-ratification bill, and Sens. Richard Stuart, R-Stafford, and Jill Hotzman Vogel, R-Fauquier, joined the Democrats in voting for the Senate version in committee.

In 2019, Sen. Glen Sturtevant, R-Richmond, who joined the bus tour, will be the lead legislator carrying the bill on the Senate side.

Speaker of the House Kirk Cox, a Republican, has made no commitment to bringing the matter to a floor vote, Foy said, but he promised her to give it “full consideration.”

Cox’s communications director, Parker Slaybaugh, said, “There are a lot of passionate advocates on both sides of the issue, as well as some serious legal and policy questions.”

Stuart said there is still considerable opposition to the amendment among some Republican lawmakers, who believe it is “a pathway to a bunch of unknown or unintended consequences.”

Among those who have strongly opposed the bill in the past, he said, “nobody’s jumping up and down and embracing it.”

Delegate Mark Cole, R-Spotsylvania, who chairs the House Privileges and Elections Committee, refused to allow a hearing for the ERA in February, explained his reasoning at the time in a written statement.

“While I certainly support equal rights for all, the ratification period for the current ERA expired in 1982 and the proposed amendment can no longer be lawfully considered by the Virginia General Assembly,” the statement said. “For the General Assembly to be able to consider the ERA, the U.S. Congress needs to resubmit the amendment to the states for ratification.”

Cole did not return repeated requests for comment about the issue last week.

Foy argued that the legal complexities should not preclude state lawmakers from taking a stand.

“Virginia has a historic opportunity to right a wrong,” she said. “We were against women’s right to vote, desegregation, child labor laws and interracial marriage. This is a chance to get it right.”