Thank you, President Bush, for defending my rights 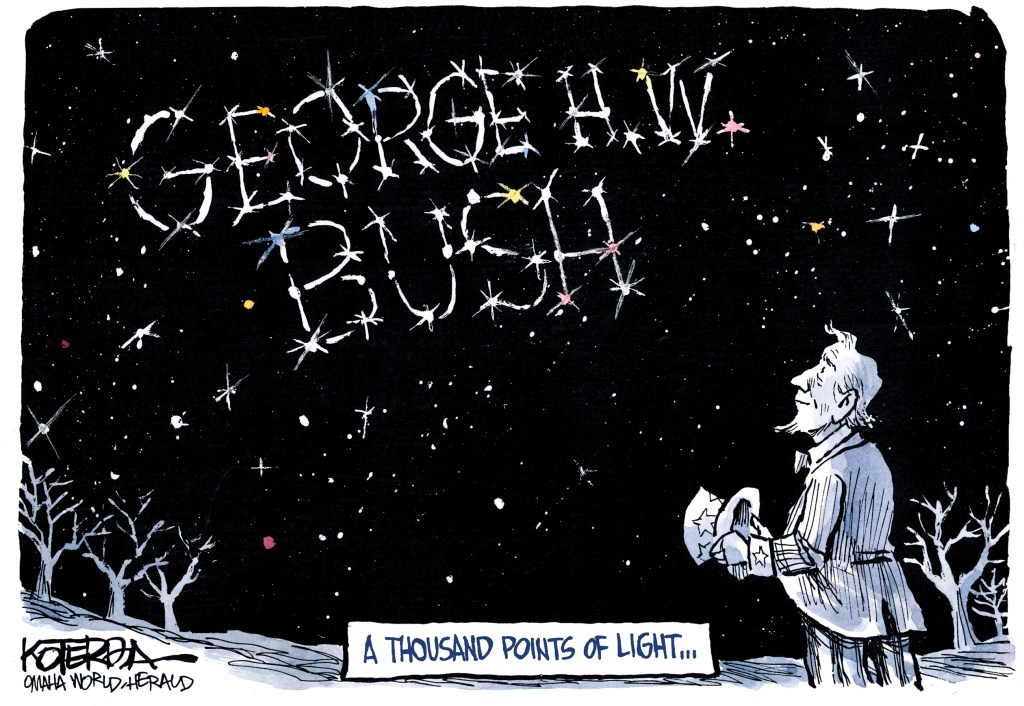 “A thousand points of light in a broad and peaceful sky.” That’s how President George H.W. Bush described the United States in his nomination acceptance speech at the 1988 Republican National Convention. At the time, the statement was mysterious to many in America. But to the disability community, it became a beacon of hope.

The Americans With Disabilities Act became one of the symbols of what Bush thought our nation could be: a nation where people were respected for their abilities, not disregarded for their inabilities; where the marginalized could share their opinions, beliefs and experiences; where people who had been shut out could be heard; and where government could craft legislation that would right wrongs and open the doors of opportunity for its citizens.

Bush, who died late Friday, believed this. It wasn’t because the disability community was a voting bloc. It wasn’t for our generous fundraising. It was because it was the right thing to do.

Without his leadership, the ADA – the most expansive piece of civil rights legislation since the 1964 Civil Rights Act – would never have been a reality. What a novel idea: that Republicans and Democrats would work together to end second-class citizenship for people with disabilities. Or that people with disabilities should have control over their own lives – to work, to eat at a new restaurant or to go to the movies. In other words, that the law should guarantee a level of basic fairness. Americans today take this for granted.

None of us really knew why the president and parts of his administration supported the ADA. We just knew that Bush stood up to many of the naysayers in both his administration and Congress. When Congress moved to limit the ADA’s protection for people with HIV/AIDS, Bush stood firm. When Congress wanted to limit transportation coverage, Bush stood firm. He listened to all the issues and found compromises within, driven by his belief that the country “must not and will not rest until every man and woman with a dream has the means to achieve it.”

I remember sitting next to Sen. Edward Kennedy, D-Mass., on the lawn of the White House during the ADA’s signing ceremony as Bush compared it to the fall of the Berlin wall: “I sign legislation which takes a sledgehammer to another wall, one which has for too many generations separated Americans with disabilities from the freedom they could glimpse, but not grasp. Once again we rejoice as this barrier falls for claiming together we will not accept, we will not excuse, we will not tolerate discrimination in America.”

He was right. Architectural barriers were the first to fall here in the United States. People with disabilities were afforded the ability to travel freely. But our work is not done. Some 30 years later, we are still working to eliminate employment barriers, health and insurance barriers, education barriers and barriers to community living. Policy barriers still remain embedded in many government programs. We know that people of color and other marginalized people are still struggling to reap the benefits of the ADA.

Still, the law has changed not only the United States but also the world. The ADA became the inspiration and model for the U.N. Convention on the Rights of Persons with Disabilities. It also became a model throughout the world in countries large and small to pass similar legislation.

For me, in these times of rancor and mistrust, the legacy of “41” is not just the passage of the ADA but also how we got there. Bush offered true leadership, bringing together all the players – Republicans and Democrats, business leaders and disability leaders – to work for the America we can all believe in.

Wright is a disability rights activist and co-founder of the Disability Rights Education and Defense Fund.