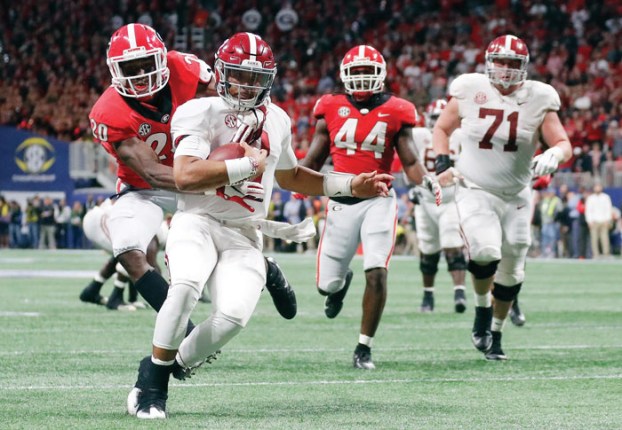 No. 1 Alabama rallies behind Hurts, tops No. 4 Georgia 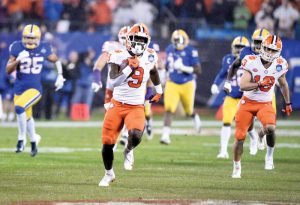 ATLANTA (AP) — In a dramatic twist on last season’s national championship game, Jalen Hurts came off the bench to pass for one touchdown and run for another in the fourth quarter, rallying No. 1 Alabama to a 35-28 victory over No. 4 Georgia in the Southeastern Conference title game Saturday.

Heisman Trophy favorite Tua Tagovailoa had to be helped off the field with just over 11 minutes remaining after one of his own linemen stepped on the quarterback’s right ankle as he attempted to throw.

Enter Hurts, who led Alabama to the national title game as a freshman but lost the starting job to Tagovailoa. Hurts calmly guided the Crimson Tide (13-0, No. 1 CFP) to tying touchdown with a 10-yard pass to Jerry Jeudy.

After Georgia (11-2, No. 4 CFP) was stuffed on a fake punt near midfield, Hurts took matters into his own hands for the winning score. Spotting an opening up the middle, he took off on a 15-yard TD run with 1:04 left.

This was a reversal of the storyline from last season’s national title game, when Tagovailoa replaced an ineffective Hurts at the start of the second half with Alabama trailing Georgia 13-0. The replacement threw three touchdown passes, including a 41-yarder in overtime that gave the Tide a stunning 26-23 victory.

Tagovailoa won the starting job in preseason practice and performed brilliantly during the regular season, throwing 36 touchdown passes with only two interceptions.

ARLINGTON, Texas (AP) — Kyler Murray threw for 379 yards and three touchdowns and Oklahoma beat Texas in the Big 12 championship game, with the Sooners avenging their only loss and making their case for a return to the College Football Playoff.

Murray, the Heisman Trophy-contending dual-threat quarterback, threw two TD passes to Grant Calcaterra. That included an impressive 18-yard score on a third-and-10 play with two minutes left as the Sooners (12-1, No. 5 CFP) won their seventh consecutive game despite being held to fewer than 40 points for the first time in nine games.

Sam Ehlinger was 23-of-36 passing for 349 yards with two touchdowns, and ran for two scores for Texas (9-4), but his final pass was picked off by Tre Norwood at the 1 in the final minute.

Oklahoma is the first Power Five team to win four consecutive outright conference titles since Florida in the SEC in the mid-1990s.

The Sooners went ahead to stay on Austin Seibert’s third field goal, a 31-yarder with 12:37 left that was good after ricocheting off the top of the left upright to make it 30-27.

Two plays after Oklahoma’s only turnover, when receiver CeeDee Lamb fumbled inside the 10 after a 54-yard catch-and-run with nine minutes left, the Sooners got points anyway. Cornerback Tre Brown sacked Ehlinger in the end zone for a safety.

The 114th meeting between the Red River rivals was their first in a championship game — and the first time since 1903 they had played twice in the same season. Every game since 1929 had been played about 20 miles away at the State Fair of Texas, where the Longhorns beat Oklahoma 48-45 eight weeks ago.

With the red-shirt freshman filling in for injured McKenzie Milton, the Knights (12-0, No. 8 CFP) won their second straight league title and extended the nation’s longest winning streak to 25 games.

Mack also threw for 348 yards and two TDs without an interception.

Clemson (13-0, CFP No. 2) is expected to face third-ranked Notre Dame, which was idle Saturday, in the College Football Playoffs on Dec. 29.

The Tigers ran for 301 yards and four touchdowns and averaged 9 yards per carry on a dreary, rain-soaked night in which Lawrence was limited to 118 yards passing.

Clemson forced three turnovers, including two in the first half that gave the offense the ball inside the Pitt 10 and led to 14 points. The Tigers limited Panthers quarterback Kenny Pickett to 8 yards passing and had nine tackles for a loss.

The Tigers entered the game as a 27 1/2-point favorite and Swinney’s team looked as if it would put Pitt away early after Etienne scored on his first two carries.

The ACC player of the year took a handoff on the first play from scrimmage, ran to the right, cutback and raced 75 yards for his 20th touchdown of the season — the quickest TD in the conference championship history. He added a second scoring run a few minutes later after Isaiah Simmons stripped Pickett of the ball and Christian Wilkins return it to the Pitt 3.

INDIANAPOLIS (AP) — Dwayne Haskins added five more touchdown passes to his single-season record Saturday and No. 6 Ohio State relied on its staunch defense to hold off a second-half charge from No. 21 Northwestern for a 45-24 victory to claim its second straight Big Ten championship.

The Buckeyes (12-1, 9-1 Big Ten, No. 6 CFP) won their third title in five years and their fifth consecutive game — but it’s unlikely to get the Buckeyes into the four-team College Football Playoff.

Haskins finished 34 of 41 with 499 yards and one interception. It’s the fifth time he topped 400 yards this season.

Clayton Thorson went 27 of 44 with 267 yards, one TD and two interceptions as he helped Northwestern trim a 24-7 halftime deficit to 24-21 midway through the third quarter. The Wildcats (8-5, 8-2) couldn’t get any closer, though, as they lost only their second conference contest in their last 17 league games.

It still turned out to be a more intriguing game than many expected, especially after the Buckeyes’ fast start.

RALEIGH (AP) — Garrett Bradbury had been waiting for his chance.

North Carolina State’s all-Atlantic Coast Conference center lined up in the backfield, took the handoff and bulled his way for a short touchdown in Saturday’s 58-3 win against East Carolina. But instead of keeping the ball, he gave it to linemate Terrone Prescod, who promptly punted it into the stands in a flag-drawing celebration.

“I think anytime a fat guy scores, everyone’s going to rally around that,” said the 6-foot-3, 300-pound Bradbury.

The Wolfpack’s romp featured plenty of those moments, too. There was senior running back Reggie Gallaspy Jr., junior receiver Jakobi Meyers and freshman kicker Christopher Dunn setting single-season program records. There was hard-hitting linebacker Germaine Pratt lining up to field a punt (he fair-caught it).

“We’re scoring touchdowns, breaking records with a ton of players, and it was a blast,” Wolfpack coach Dave Doeren said. “It was an absolute blast.”

Gallaspy ran for 220 yards and two scores to reach a program-record 19 total TDs this year for N.C. State (9-3), which scored on four straight possessions to lead 24-0 by early in the second quarter in what became seemingly a never-ending run of celebration en route to 655 total yards.

Things were far more grim for the Pirates (3-9), who had just 55 yards before Anthony Scott’s 53-yard run in the final 2 minutes. East Carolina finished with 104 yards and avoided its first shutout since October 1997 by calling timeout with 3 seconds left to get Jake Verity’s 46-yard field goal to end the game.

Doeren called a timeout, too, to ice Verity and preserve the shutout.

“They’re a good group of young men,” interim ECU coach David Blackwell said. “They fight their tails off. We just ran out of weapons today.”

ECU: The Pirates took the field roughly 48 hours after the firing of coach Scottie Montgomery. Blackwell, the team’s defensive coordinator, had an already-difficult task was made tougher by the fact starting quarterback Holton Ahlers was out due to injury. The Pirates also lost No. 2 quarterback Reid Herring (Saturday’s starter) when he was hurt on a third-quarter sack. All in all, it was a debacle of an afternoon to finish a rough season.

Blackwell said the ECU coaches must “shift modes” and focus on recruiting, adding: “We’ve got to kind of hold it together until (school leaders) do what they’re going to do.”

Doeren said he wanted to get Bradbury the carry in last week’s overtime win at rival North Carolina, but Gallaspy was the hot hand with five rushing scores. This time, Doeren said, Bradbury was practically calling the play after the Wolfpack returned a fumble to the ECU 1-yard line with a 44-0 lead in the fourth quarter.

Doeren told Bradbury beforehand that he should keep the ball, but Bradbury said he relented to begging from the 6-5, 334-pound Prescod to let him punt it and “show some versatility as a player.”

“Everyone was just like keep it and run to the sideline and put it up in a case,” Bradbury said. “But if I did that, then I feel like I’d just look at it every day and wonder: what if T could’ve punted it?”

ECU: The Pirates’ offseason to-do list includes finding a new coach as well as getting around to hiring a new athletic director after leaving that position vacant since the spring. And oh yes, they open next season right back here on the same field in Raleigh.