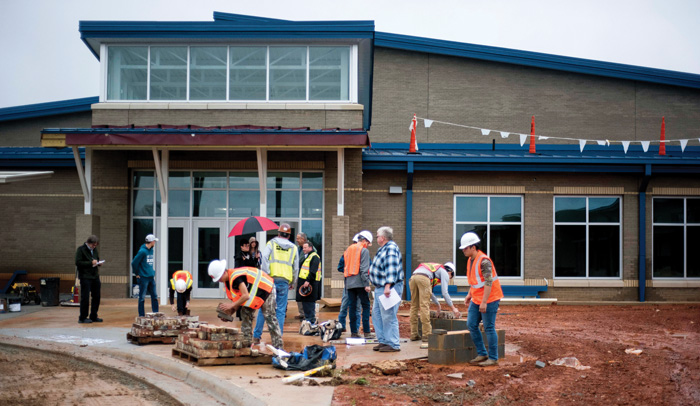 High school students build benches in November at the front of the new West Rowan Elementary School in Cleveland, made with bricks from Cleveland Elementary and Woodleaf Elementary, the first Rowan-Salisbury schools to consolidate. Jon C. Lakey/Salisbury Post

SALISBURY  — Rowan County residents will have six opportunities in the coming weeks to learn more about a school closing and consolidation proposal that would impact 12 schools.

The Board of Education has scheduled six community input sessions beginning Tuesday. Here’s the schedule:

• The plan would also close Overton Elementary, which would become part of Knox Middle’s K-8 replacement.

This is the second time in recent years that the school board has discussed streamlining a system that has far more capacity than students, thanks to demographic trends and the rise of private, charter and home schools.

A report compiled in 2016 showed the system had 1,802 empty seats in elementary schools, 365 in middle schools and 1,243 in high schools, for a total of 3,410. That report put total enrollment at 20,322; the student population has continued to decline.

Keeping up with maintenance on that extra space has outstripped funds the system has for capital expenses, school officials say. It costs an average of $153,000 per year to maintain each of the 35 schools and their campuses, according to school officials’ estimates. That adds up to $5.35 million in capital needs each year, while the system receives less than half that much — about $2.4 million annually — to do the job.

That said, executing the plan would also be expensive — more than $240 million for the first two tiers or phases of the three-part plan. The proposal has been presented as something to be carried out in one to five years.

The school board is tackling this issue as it comes off an election in which three board members won re-election without opposition — despite an uproar two years ago over the consultants’ proposal to close six elementary schools.

The 2016 plan recommended closing Cleveland and Woodleaf and replacing them with a new West Rowan Elementary School — a proposal the school board adopted. The new elementary school is scheduled to open after the Christmas break.

Also recommended for closure under the 2016 proposal were Mt. Ulla, Enochville, Faith and Morgan elementary schools. Public outcry was fierce, and the board backed away from the plan.

After that, a committee of citizens and school personnel was put together to work on a new proposal. The group’s recommendations were made public in November 2017 and set aside. They resurfaced at the board’s Nov. 26 meeting.

The current proposal has three tiers or phases. Mt. Ulla and Morgan elementaries, which were among the schools consultants recommended for closure or consolidation in 2016, fall to Tier III in the latest proposal as two of six schools recommended for renovation or replacement. Others are Bostian, Hurley and Knollwood elementaries and Salisbury High. No cost estimate for Tier III has been made public yet.

More details about the proposal are on page 1D of today’s Post.

The school system has posted information about the proposal on its website.