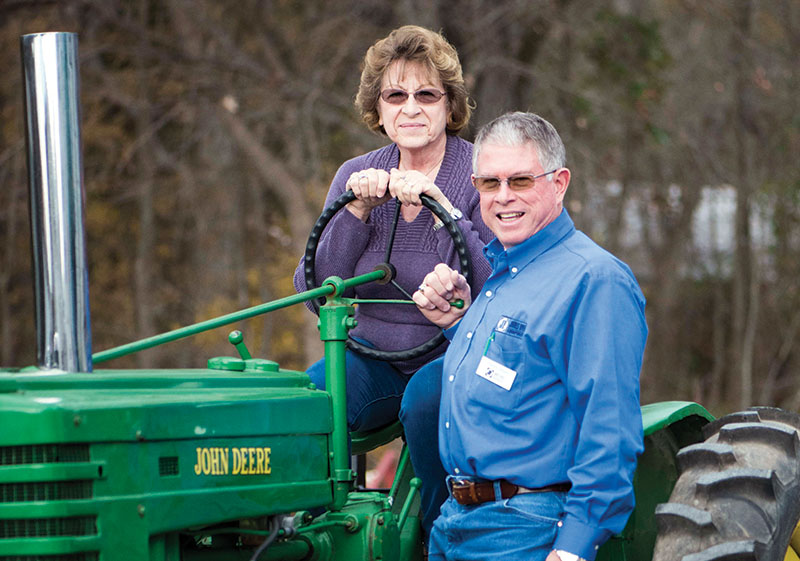 No one in Rowan County has had a closer association with John Deere equipment over the past half century. And with all that Elium remains involved with, you could easily borrow the advertising slogan “Nothing Runs Like a Deere” and just say “Nothing Runs Like Randy Elium.”

So it was fitting at his retirement party Thursday that Elium’s fellow employees called him outside and James River Farm Equipment presented him with a 1939 John Deere H tractor — an antique gem Elium had always admired.

Over 50 years, Elium says he witnessed the equipment farmers use in Rowan County go from no-frills tractors like his H model to what today is “‘Stars Wars’ technology.” And Elium talks about that evolution with the excitement of a little kid.

“I thought I was selling people a product that made their lives better,” he says.

Elium gushes about satellite-dependent guidance systems farmers now use to plant and spray with and soundproof tractor cabs that have become their offices on wheels.

“You get into a cab of one of these combines and you feel like you’re in a jetliner, with all that information coming in to you,” Elium says.

Gosh, he adds, some tractors depend on seven different computer systems. Elium acknowledges there’s plenty of expense upfront, but it’s all designed to cut the costs in the fields, be better for the environment and feed the country.

Feed the world, really. That’s what his wife, Pam, chimes in.

“The farmers and consumers who have come in here have been the greatest people to work with,” Randy says.

Randy and Pam Elium retired together Friday from James River Equipment at 805 Klumac Road. It brought to an end Randy’s more than 50 years of employment at this business, which he once co-owned, and almost 23 years for Pam, the office manager.

Besides the tractor, the employees also presented them with engraved watches, which they wore proudly on their last day of work.

It doesn’t look as though they will be slowing down in retirement.

The couple plan to expand their farm’s production of produce, looking for a big season next year of strawberries, blueberries and blackberries, to go along with their sweet corn.

Randy says they have the necessary equipment — John Deere, of course — and irrigation systems in place.

“We’ve planned for this,” he says.

The Eliums have 22 acres and plan to devote about half their land to their produce operation.

The farm also is where Randy and friend Dennis Peeler collect, cut and distribute wood for a ministry supplying free wood as a heating source for people in need.

The couple are heavily involved in Maranatha Bible Church and the Carolina Antique Power Association, which is developing the Country Life Museum at Sloan Park.

Randy is a member of the Farm Bureau and also the county agricultural advisory board that will be promoting farmers in the community and pushing for more farmland preservation.

Randy continues his beekeeping and belongs to the Rowan Beekeepers Association.

So he and Pam have plenty to keep them busy.

But back to John Deere for a moment.

As a dealership, John Deere came to Rowan County in 1940, when Randy’s Uncle Jim Elium was working for Zenith Chemical Co. in Salisbury. Jim Elium was in the fertilizer end of the chemical business and began working for D.C. Dungan Farm Equipment Co.

William O. “Bill” Ryburn bought the business in 1950 from Dungan and changed the name to Ryburn Farm Equipment Co. Back then, it was off South Main Street Extension.

Ryburn was one of Rowan County’s most decorated World War II fliers. As a major in the Army Air Corps, he commanded a squadron of B-29 superfortresses and made 34 bombing runs to the Japanese mainland, for which he was awarded the Distinguished Flying Cross.

At his purchase of Dungan’s farm equipment business, Ryburn kept Randy’s uncle as parts manager. James Elium would stay with Ryburn through his retirement in 1976, and his wife, Rebecca, a bookkeeper for the business, retired with him — much like Randy and Pam would do 42 years later.

Ryburn built an 8,000-square-foot facility at the present Klumac Road location in late 1960 and had a John Deere Day open house there in the spring of 1961.

Through his uncle’s connection, Randy came to work for Ryburn Farm Equipment in the summer of 1968, when he was 15 and needed a work permit.

Randy, attending East Rowan High School at the time, mostly swept floors and cleaned restrooms at first. “They let me do all the jobs no one else wanted to do,” Elium says.

By Christmas of that year, he got into the shop end of the business. But some of the nastier chores still fell to him, such as steam-cleaning a manure spreader.

Randy secured his chauffeur’s license the next summer, meaning he could deliver equipment to customers. He also was sent as a 16-year-old to repossess equipment farmers couldn’t pay on.

“I didn’t know what I was wading into,” Elium says, but he proved stubborn and tenacious enough for the task.

That same summer in 1969, he remembers working all of one July Saturday — the same weekend Neil Armstrong and Buzz Aldrin were making the first landing of men on the moon.

“I wanted to see that so bad, but I almost slept through the night,” Elium says.

“All through those years, there were a tremendous amount of good people to work with,”  Randy says.

Elium kept working at Ryburn Farm Equipment as he earned his business degree at Catawba College. He impressed his uncle with his savvy in the parts department, stayed with the company and moved into sales in 1984.

His uncle told him to “shave the sheep, but don’t cut the hide,” meaning treat customers fairly. Elium, who would be both sales manager and general manager through the years, says customer service and satisfaction are important in sales, parts and service.

“I wanted everybody out there to like us,” he says.

In October 1995, Elium partnered with Tom Smith to buy Ryburn Farm Equipment, and the John Deere dealership became Piedmont Farm and Yard. In 2006, it merged with James River.

Randy, Pam and their son-in-law, Michael Board (general manager today), stayed on as employees, and Elium and Smith became stockholders in the bigger company.

The move gave the Salisbury dealership better buying power and service, Elium says, adding, “It made us better for the customers.”

Randy and Pam met at Catawba College and married in 1972 when they were sophomores. Pam, who was from Mount Pleasant, graduated with a degree in biology, then earned her master’s degree in biology from the University of North Carolina at Charlotte.

She worked for years in the laboratory at N.C. Finishing Co. and also taught for a while at Horizons Unlimited and North Rowan High. She came to the John Deere dealership in January 1996 at Randy’s urging to do the bookkeeping, and she grew into the job of office manager.

“She has a brilliant memory” that’s good for collating and bringing things together on a balance sheet, Randy says. “… We’ve been blessed along the way with our (work) relationship with each other.”

Randy Elium will still be involved this month when James River Equipment makes its big move into a new facility on Julian Road. The new place is four times the size of the Klumac Road building, and it also will serve as a James River terminal for the region.

The day of the move, Dec. 15, a big “power parade” is planned for transferring all the equipment from Klumac Road to Julian Road. On his desk Friday, Elium had a list of the people he is lining up to drive the John Deere equipment to the new site.

It will require 60 to 70 drivers. You can bet Elium will be one of them.