David Shribman: The ‘Frontrunner’ and me 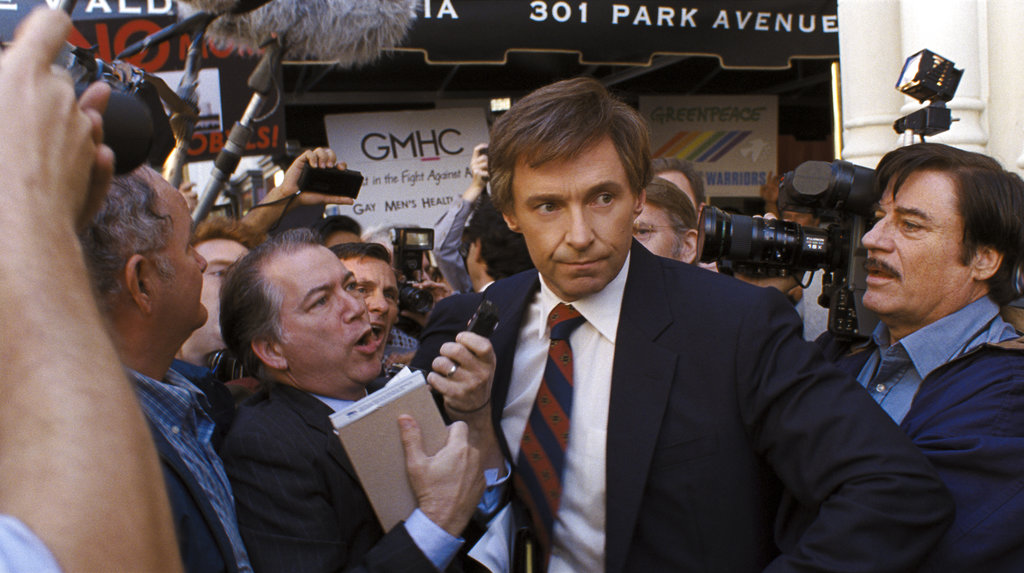 FILE - This file image released by Sony Pictures shows Hugh Jackman in a scene from "The Front Runner." The Gary Hart saga of 1987 is barely remembered by many, and seen largely as a sad political footnote, even an unfortunate joke. Makers of “Front Runner,” starring Jackman as the once-promising Colorado senator, argue that Hart’s story was hardly a joke but actually a watershed moment for American politics, journalism and culture, when politicians became celebrities and their private lives became public property. And, they say, it remains deeply relevant today. (Sony Pictures via AP, File)

Long ago and far away — in 1987 and in New Hampshire, to be precise — a promising candidate for the White House was hounded out of the presidential campaign because he was seen in his townhouse with a 29-year-old woman. It was a political drama then, and it is a film drama now.

Gary Hart turned 82 Wednesday. His hair is gray, his walk no longer the confident stride of a man on the go or, his detractors would snicker, on the move — though we do not know today what we did not know then, which is whether he had an affair with Donna Rice.

But I do know this: I didn’t care then, and I surely don’t care now.

This is all rushing back to us now that the film “The Front Runner” is in theaters across the country. It is said to be a cautionary tale, a look at the moment when American politics became trivialized and tabloidized.

Hart, his wife, Lee, and longtime Hart aide Billy Shore saw the film in August. I can’t imagine how they could bear to relive what Hart said was the worst week in his life. I saw the film last week — one of 11 people in the movie house, so I acknowledge that this is not top of mind for most people — and I could hardly bear reliving what was one of the most frenzied weeks in my professional life.

The Sunday morning the Miami Herald broke the story of Hart’s townhouse guest, I got a telephone call from Albert Hunt Jr., then The Wall Street Journal’s Washington bureau chief. I was a 33-year-old Journal political reporter and had covered Hart’s 1984 campaign; spent time talking about his 1988 campaign plans with him, his wife and two children in his Troublesome Gulch, Colorado, retreat; and traveled widely with the former senator. Our relationship was conventional for the time, each respecting the distance between reporter and candidate, breaching that only in jetliner conversations about Herman Melville and Harriet Beecher Stowe. He had been a bookish boy and, truth to tell, so had I.

I told him I had no idea. He told me Rice had been in the Hart townhouse and the Herald had written about it.

I remember gulping. I hated this kind of story, then and now. “Al,” I said warily but resolutely, “that’s not our kind of story.”

Hunt agreed. He didn’t assign me to write anything, and I didn’t. The Journal was the only newspaper in Christendom that Monday that didn’t carry the details. Though beaten on a big story, in our smugness we were proud of that. I talked with Hunt last week. We’re still proud of that.

But by Tuesday, there was no avoiding the Hart story. The man — so decisive a front-runner that one of the leading analysts of the age, William Schneider, told me a month earlier that “Hart has no one to run against” — was in free fall. His support among likely Democratic voters dropped to 27 percent from 41 percent less than a month earlier.

The campaign limped into New Hampshire where, at the Hanover Inn, he held one of the most raucous press conferences in history, batting back questions about his character, whether adultery was immoral, whether he had committed adultery. It was a spectacle and the only moment in a half-century career where I had a decisive competitive advantage. I am a graduate of Dartmouth College and was the only person who, in an era when that mattered, knew where a pay phone was. I ran to the one opposite my onetime college post box in the Hopkins Center for the Arts.

“The Front Runner” captures the urgency but not the accuracy of the moment a third of a century ago. It propels a famous ax-throwing scene from 1984 into 1987 and moves a trip to Hart’s Ottawa, Kansas, hometown out of sync. It conflates New York Times and Washington Post reporters. Worst of all, it repeats the canard that the Herald reporters were responding to Hart’s dare that reporters follow him around. That remark appeared in the Times 24 hours after the Herald reporters actually did follow him around. And the Post executive editor Ben Bradlee portrayed in the film didn’t look or sound remotely like the real one, or like Jason Robards in “All the President’s Men,” who did.

Hart told me that Hugh Jackman, who played him, spent three days in Colorado with the Harts, who have been married for six decades. But he said the scenes between him and his wife never happened, that all their dialogue was imaginary.

Even so, “The Front Runner” raises vital questions for our politics, centuries-old questions reappearing frequently today, chief among them this: Is there a relationship between private behavior and public political performance? This question is at the center of the lives of Hart — and Franklin Roosevelt, John F. Kennedy, Lyndon Johnson, Bill Clinton and Donald Trump.

Then there is the strategic question at the heart of the second Hart campaign: Can a onetime insurgent prevail as the front-runner in a new campaign? Here in the Trump era we still don’t know whether rebels can be establishment figures.

Months after departing the race, Hart plunged back in, an unwelcome interloper disparaged by a top Democratic strategist as a “guy in a funny suit coming onto the stage.”

He was going nowhere, though that morning he was heading to Sioux Falls, South Dakota, and I managed to get the seat beside him on a commercial flight. He pulled out his black billfold and shook two $20 bills. “Here is the campaign budget,” he said. He had no campaign scheduler, no press secretary, planned no fundraisers.

“My daughter’s the campaign manager, I’m the issues director, my son provides the security,” he said. “That’s it.”

As he flipped through a yellow legal pad, I noticed a quote from Tennyson: “My purpose holds to sail beyond the sunset …”

At one point, he reached into a satchel and brandished a 96-page manifesto bearing the stultifying title of “Reform, Hope and the Human Factor: Ideas for National Restructuring.” Broke but not broken, he told me he was going to charge 75 cents for it. I sent him three quarters last week. I owed him.