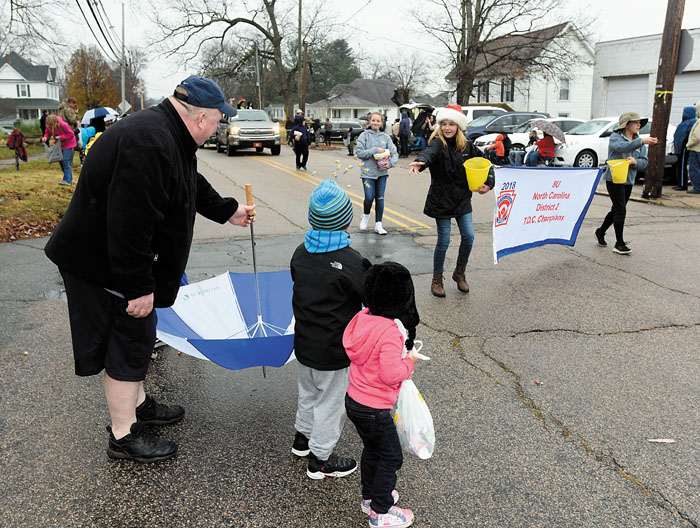 Wayne Hinshaw / for the Salisbury Post Daniel Ramsey helps his grandson catch candy in an umbrella at the Cleveland Christmas Parade on Saturday.

CLEVELAND — Woody Brown and her son, Caleb, 12, spent all Saturday together from a breakfast with Santa in Charlotte and later that evening they attended a mother-son dance at Woodleaf Elementary, but one of the highlights of their time is continuing the tradition of going to the Cleveland Christmas parade together.

The two always “camp out” in front of the Cleveland Town Hall building. The parade makes Brown emotional she said because of the memories of taking her now-adult children to the parade when they were young.

“I always end up crying. I see so many people I know,” she said.

Brown has been attending for for 22 years and for 15 of those years her children rode their horses in the parade.

Mother and son went to the Sheraton in Charlotte for breakfast hosted by the Down Syndrome Association. There were about 500 families there, Brown said.

The parade has been going on rain or shine for 47 years.

“Rain or shine the show must and does go on. The parade has always had a hometown feel and showcased local folks and activities, and today’s parade was no different,” said organizer Liz Steele.

Steele said the crowd was smaller than most years with the rain. She estimated previous parade attendance between 2,000 and 3,000 spectators, mostly from Cleveland, Woodleaf, and the Mount Ulla areas.

The parade for Deborah Petersheim is a kick-off to Christmas. She attended with her children and family friends. They’ve been spectators at the parade for the last five ears.

“Now we’re ready to put up the tree,” Petersheim said.

She said she also enjoys seeing the church floats.

Five-year-old Jace sat with his brother Westin, 2, and their mother Casey Robinson, along with friend Jarne’a Bard, 10, and other family members.

Jace explained he was most excited to see the tractors and horses. The family arrives two hours early to reserve their spot, pick up a pizza and tailgates before the parade begins.

“We sit in the same spot,” Robinson said.

It’s been 20 years of attending the Cleveland parade for Jimmy Redmond, his family and friends.

The group set up a tent on the sidewalk in front of the town hall building. This year they made ham sliders and a breakfast casserole and the holiday snack that Redmond is famous for amongst his friends: Sugar coated pecans that his friends have affectionately called Sugar Nuts.

It’s what Redmond gives to friends and family as gifts each year. He typically makes 20 to 30 pounds.

They set up around 11:45 a.m. to eat and enjoy each other’s company until the parade kicks off.

“I think it’s great. It’s a small, friendly community and full of hometown culture,” said friend Jane Neis. She and her husband David, who spend their winters in the area and their summers in Rochester, N.Y., have attended the parade for about five years.

Kathy Little of Conover attends the parade with her niece, friends and other family. They pull up camp-style chairs on the sidewalk in front of her niece’s home.

“They put on a good show,” she said of the parade.

The family and friends all bring covered dishes, eat and then watch the parade.

Daniel Taylor has been attending the parade for 41 years and continues the tradition with his wife, Chrissy, and their children Connor, 10, Lizzy, 8, and Levi, 6.

“I haven’t missed one yet,” Daniel said of the parades.

Typically when the weather permits and the vendors are present, the family usually eats from one of the vendors selling food.

A special thank you to ForceTec, the Town of Cleveland, and the Cleveland Police department for their support of the parade, Steele said.

This year’s judges were — Michelle Newton of Woodleaf, Stephanie McClannon of Cleveland, and Christine Turner of Cleveland.

“Thanks to our judges who are selected from the spectators as it gives the community an opportunity to be involved,” Steele said.

The schools report: Building for the future