Chiefs set for Oakland without top running back Hunt 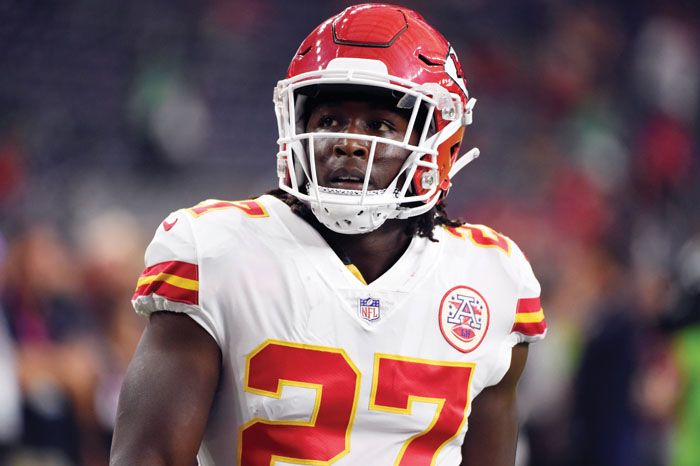 FILE - In this Oct. 8, 2017, file photo, Kansas City Chiefs running back Kareem Hunt warms up for the team's NFL football game against the Houston Texans in Houston. The Chiefs released Hunt on Friday, Nov. 30, 2018, after video surfaced that showed the NFL's reigning rushing champion knocking over and kicking a woman in a Cleveland hotel hallway in February. (AP Photo/Eric Christian Smith, File)

KANSAS CITY, Mo. (AP) — Kareem Hunt went from the Kansas City Chiefs’ practice field to looking for a job in about six hours, a spectacular fall for the NFL’s reigning rushing champion.

The Pro Bowl running back had been preparing for Sunday’s game at Oakland when a months-old video surfaced online. The footage from a Cleveland hotel security camera showed Hunt shoving and kicking a woman, with police ultimately responding. No charges were filed.

The Chiefs immediately sent Hunt home as the TMZ video rippled across social media. An organization that prides itself on providing second chances said in a statement late Friday it had released the 23-year-old star. The team was traveling Saturday.

The NFL had no comment Friday night beyond saying Hunt was on the commissioner’s exempt list, meaning he can’t play or attend games while the league investigates.

The question now for both the Chiefs and Hunt is simple: What’s next?

The Chiefs (9-2) are barreling toward the No. 1 seed in the playoffs, and the loss of their leading rusher is substantial. Hunt already had run for more than 800 yards and had 14 total touchdowns, helping Kansas City form one of the league’s most dynamic offenses.

His ability to churn out yards on the ground helped the Chiefs put away several games. His ability to catch passes out of the backfield had been just as useful.

Yet the falloff to Spencer Ware isn’t that significant.

The Chiefs’ backup was the unquestioned starter heading into last season, even after the team made Hunt their third-round pick. It wasn’t until Ware — whose skill set closely mirrors that of Hunt — went down with a season-ending knee injury in the preseason that the rookie took over.

“There was a question whether he would be able to come back from that injury. It was a pretty tough injury to come back from,” Chiefs coach Andy Reid said recently. “The last couple weeks he has played good football. You can see where he is more confident each week here.”

The Chiefs are also confident in backups Damien Williams and Darrel Williams. And with a soft schedule down the stretch, including two games against the Raiders, there is plenty of time for their offense to adjust to life without Hunt in the backfield.

So that is what’s next for the Chiefs. What happens to Hunt?

The Chiefs and the NFL knew what happened in February in Cleveland, and the organization spoke to Hunt on several occasions before handling discipline internally. But neither the team nor the league had seen the video before it became public Friday.

The NFL made multiple attempts to obtain it, a person familiar with the case told The Associated Press, speaking on condition of anonymity because of the ongoing investigation. The hotel informed the league that corporate policy allowed the video to be given only to law enforcement.

The NFL then contacted Cleveland police, the person said. Police declined to provide the video. Police and hotel officials have not commented.

The video showed Hunt lunging toward a woman and several others in a hotel hallway, and the player being restrained several times before knocking two people down. Two police reports were filed in which each person accuses the other: Hunt is listed as the suspect in one; a woman, Abigail Ottinger, is the suspect in the other.

In its grainy and graphic footage, the video brought a new dimension to developments, showing that what Hunt had told the Chiefs was not the case. The team said he was “not truthful in those discussions.”

The matter brought immediate comparisons to the video of Ravens running back Ray Rice punching a woman in an elevator, which ultimately led to a long legal saga that ended with him never playing in the NFL again.

The big difference between Rice and Hunt, though, is this: Rice was on the downward side of his career while Hunt was on the ascent.

Being on the exempt list does not prevent another team from taking a chance on a player. That was the underlined when the Washington Redskins signed linebacker Reuben Foster, who had been cut last week after he was arrested on suspicion of domestic violence.

The Redskins faced harsh public criticism, and there will no doubt be a similar outcry if a team signs Hunt. But balancing such opposition against the benefits of a young star in his prime is a delicate decision for team executives.

Hunt issued a brief apology late Friday, a small first step toward getting another chance. But as the Chiefs get ready to play in Oakland, Hunt will be watching on television.

There are many more steps before Hunt takes the field again.

If it ever happens.

KEYS TO TURNAROUNDS FOR SEAHAWKS, COLTS AND TEXANS

Turn back the clock to September. What do you see if you root for the Colts, Texans and Seahawks?

It’s now after Thanksgiving, and Houston l eads the AFC South, with Indianapolis in hot pursuit. Seattle has stamped itself as a wild-card contender in the NFC, and an opponent most teams would like to avoid.

All three have made impressive turnarounds that could become memorable should they lead to the playoffs — and January success.

So how does it happen? Indy was 1-5 and now is 6-5. Seattle had two dirty defeats to open the schedule and was headed down a long losing path. Houston went 0-3, yet has become the first team to win eight straight after such a weak start.

“There is just a real upbeat aura about this team,” says Seahawks coach Pete Carroll, who majors in upbeat and is doing one of the best jobs of his distinguished career.

“They’re real hungry to learn, they’re hungry for the challenges,” he added. “They’ve just been real competitive throughout and they’ve enjoyed the challenges. They have not allowed themselves to go downward at any time. They keep looking to the future and what’s up and what’s coming. It’s just been a really good group to work with.”

“You just have to believe,” explains defensive end J.J. Watt, who majors in believing — and is in the midst of a spectacular comeback season. “A lot of it comes down to belief, remaining positive even in a difficult situation and believing in yourself, and believing in each other, and knowing that you can turn it around.

“I think sometimes … you’re 0-3 or you’re in a tough situation, you look around and you’re like, ‘Maybe that’s just us.’ I think we all in that situation this year knew that wasn’t us. I think we knew we had the players in the room and the ability to play a lot better than we did and to win those games. So, I think it’s easy to believe when you know that about your guys.”

The main guy in Indianapolis has been Andrew Luck, who in strange circumstances never fully explained, missed the entire 2017 season with a shoulder injury. Like Watt, he’s having a monster of a comeback year.

Folks in Indy cite coach Frank Reich — a second choice remember, after Josh McDaniels reneged on his deal with the Colts — playing to win in tight situations, such as the overtime loss to the Texans — as being a turning point.

“I think Frank has done a great job of keeping us just focused at the task at hand, whether we were losing games, winning games (or) whatever it is,” Luck says.

“The approach has been the same. So in that department, really nothing has changed. We’ve just come in and try to make the most out of each day. I know it sounds cliché, but it’s what’s working for us. That’s where our focus needs to stay. I think it is and we will fight against letting our focus go elsewhere.”

The key to winding up with a positive season after a negative start really comes down to faith. Faith in the coaching staff, in the players, in staying healthy enough, and in getting some breaks.

Stay the course, and that course might lead you deep into January. Or beyond.

“We will see it down the stretch, for sure, that well-coached teams get better as the season goes along unless they are decimated by injury,” says Hall of Famer Bill Polian, the guiding force for three winning franchises as a team executive.

“The guys that can coach get a handle on their team and then they coach the team they have got as opposed to the team that was on paper prior to training camp. They adjust accordingly and go ahead and figure out how best to maximize their strengths and minimize weaknesses.”

That has been the case particularly in Seattle, where Carroll recognized a ball-control offense and opportunistic defense filled with new faces was the correct approach.

“Guys who heal up and are ready to go who are question marks in training camp,” Polian points to as critical. “Andrew Luck, who has never played better football in his life, is completely healthy, ready to go and excited, and has a coach who lets Andrew be Andrew. The offensive line has coalesced thanks to the drafting of Quenton Nelson and the return of Anthony Costanzo. That team is way better than they were at the start of training camp.

“And Houston is the same way. It’s gotten healthy with the return of Watt and the quarterback (Deshaun Watson), who is there full time, and now that is a different team.”

Personnel changes that have worked also have led to success in all three cities.

The Texans obviously have Watt and Watson back, along with linebacker Whitney Mercilus, and third-round cornerback Justin Reid. Adding veteran wideout Demaryius Thomas when Will Fuller tore up his knee is paying off, too.

For Seattle, a stable of running backs, from first-round pick Rashaad Penny to second-year player Chris Carson to fourth-year vet Mike Davis has kept the backfield fresh. Second-year receiver David Moore has become a contributor, and the tight ends have picked up the slack with Jimmy Graham gone to Green Bay.

Most of all, the Legion of Boom has gone bust, but the secondary still has progressed throughout the schedule.

We might not be looking at a Super Bowl team from Houston, Indianapolis or Seattle this season. But remember what we were looking at two months ago.