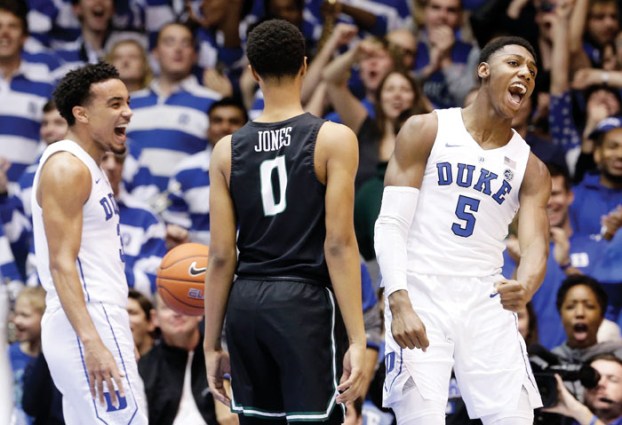 DURHAM (AP) — RJ Barrett didn’t know how close he was to a triple-double. The Duke freshman was having too much fun to check the box score.

Barrett had 26 points, seven rebounds and a season-high seven assists, and the third-ranked Blue Devils routed Stetson 113-49 on Saturday night.

“I was just having too much fun out there” to worry about the stats, Barrett said.

Duke shot a season-best 58 percent, and had season highs of 19 steals and 27 turnovers forced while reaching triple digits for the first time since the season-opening 118-84 rout of then-No. 2 Kentucky.

“That’s what happens when we play hard and play together,” Barrett said. “We play defense and turn it into offense.”

Barrett played just 17 minutes, but that was long enough to challenge for Duke’s first triple-double in nearly 13 years.

According to the school, he’s the first player in program history with that many points, rebounds and assists plus four steals in a game. He was taken out for good with 15:38 left and the Blue Devils up by 50.

“I thought we’d play the starters more in the second half, and then we just exploded,” coach Mike Krzyzewski said.

Abayomi Iyiola scored 19 points to lead the Hatters (1-8), who have lost eight straight and were 2 of 23 from 3-point range.

The rebuilding Hatters have yet to beat a Division I team this season, haven’t beaten a Top 25 team since 1982 and lost five key players from last year. So expecting them to be competitive might have been asking too much from the No. 338 team in Ken Pomeroy’s efficiency rankings. At least they led — on three separate occasions early, by one point each time, for a total of 34 seconds.

“I’ve never faced a team like that since I’ve been at Stetson,” sixth-year coach Corey Williams said. “They are certainly more than advertised, and we had to play a flawless game to even keep it close.”

MIAMI (AP) — Markell Johnson kept getting to the rim down the stretch, and the North Carolina State Wolfpack showed they can finish.

Johnson scored 12 consecutive points down in a late three-minute span to break open a close game, and the Wolfpack beat Vanderbilt 80-65 Saturday.

North Carolina State (7-1) bounced back from its first loss of the season Tuesday at Wisconsin.

“At the end of the Wisconsin game, I don’t think we handled it well,” coach Kevin Keatts said. “So for the last couple of days we’ve been talking about end-of-the-game situations. Markell was very aggressive and made the right plays. I never thought we showed any panic — 72 hours ago we wouldn’t have been the same team.”

Johnson penetrated several times in a row to help transform a 60-58 lead into a 72-61 advantage.

“I was seeing the lanes open up and trying to take the best shot I could,” he said.

“I think he’s their best player,” Vanderbilt coach Bryce Drew said. “He’s excellent at driving left, and unfortunately we let him drive left too many times the last seven minutes.”

“Darius is a big part of our team,” Vandy forward Simi Shittu said. “We’re going to go through this and move.”

The game was part of the Hoophall Miami Invitational, a four-team, one-day event at the Heat’s arena.

The Wolfpack never trailed and built an 11-point lead midway through the first half. Sophomore reserve D.J. Funderburk scored a career-high 16 points, all in the first half.

Vanderbilt closed to within 60-58 and had three shots to tie but never erased their deficit.

Shittu and Saben Lee had 15 points apiece for Vanderbilt. The Commodores, who made 56 3-pointers in their first six games, went 3 for 22 from beyond the arc.

“There were some bad shots,” Drew said. “That’s why some guys came out of the game after they shot them.”

Torin Dorn finished with 10 points and seven rebounds for the Wolfpack, who enjoyed a 46-33 rebounding edge.

The game drew a tiny crowd, with the Wolfpack bench making the most noise.

“That’s the last thing we said before we took the floor — there’s nobody out there, so we have to be our own spark, our own energy,” Dorn said. “That’s something we pride ourselves on.”

No. 1 Alabama rallies behind Hurts, tops No. 4 Georgia