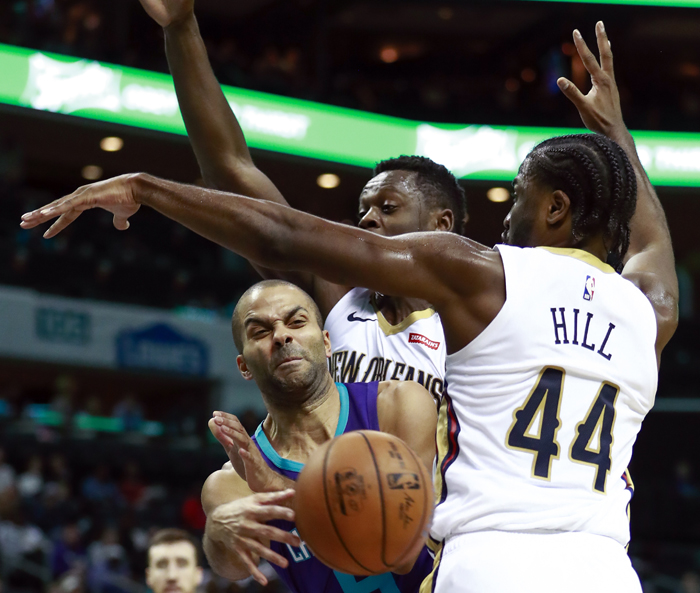 CHARLOTTE (AP) — Six years later, Anthony Davis still haunts the Charlotte Hornets.
Davis had 36 points, 19 rebounds and eight assists, and the New Orleans Pelicans defeated the Hornets 119-109 on Sunday.
Davis is the franchise-changing player Charlotte had targeted in the 2012 draft after going 7-59 the previous season, the worst winning percentage in NBA franchise history. However, New Orleans defied the odds to win the draft lottery and took Davis No. 1 overall, while Charlotte was forced to settle on his former Kentucky teammate Michael Kidd-Gilchrist at No. 2. Davis is a five-time NBA All-Star, while Kidd-Gilchrist is a backup for the Hornets.
The Hornets, and their fans, certainly remember the day when the ping pong balls didn’t fall their way.
Davis said he never thinks about what it would have been like to play in Charlotte, but he always seems to remind the fans and the organization — whether consciously or not — of what they missed out on with some of his best games coming against the Hornets.
Sunday was no exception.
When Davis wasn’t scoring and rebound, he was facilitating. His assist numbers have increased this season as he’s seeing more and more double teams. He’s averaging 4.8 assists this year, more than double any of his previous six seasons in the NBA.
Pelicans coach Alvin Gentry said Davis is doing a great job of taking what the defense is giving him and finding open teammates.
“If they’re going to double-team him or, you know, even try to triple team him some, he’s always been a willing passer,” Gentry said. “So he’s going to pass the ball and he’s going to make the right play.”
Davis credits his teammates for stepping up and making more shots.
Jrue Holiday added 19 points and eight assists for the Pelicans, who won for only the second time in seven games.
“He demands so much respect, especially on the court, just to be able to have one guy on him that’s a tough matchup for any and everybody,” Holiday said. “The way that he finds people makes it easier on us honestly — wide-open shots, drives to the basket, cuts.”
Davis said the goal was to be aggressive from the start and set the tone.
“We’ve been getting off to slow starts and that’s on our starters on both ends of the floor, so I just tried to be aggressive, whether that’s for me or my teammates, and I just hope other guys follow, and they did,” Davis said.
Davis was 14 of 19 from the field and dominated on both ends of the floor.
Frank Kaminsky led the Hornets with a season-high 19 points, although he struggled with guarding Davis in the paint.

TIP INS
Pelicans: Nikola Mirotic had 16 points and eight rebounds in the win, but was just 5 of 14 from the field. … Julius Randle and Darius Miller each had 13 points off the bench. … Had 30 assists.
Hornets: After starting the same lineup for the first 22 games, Willy Hernangomez got the start in place of Cody Zeller (ribs) at center.

WALKER STRUGGLES
Kemba Walker shook off an early sprained ankle and continued to play, but made just 5 of 16 shots and finished with 13 points. Walker opened the season with at least 26 points in 10 of the team’s first 17 games including a 60-point game against the Philadelphia 76ers. However, he hasn’t reached that mark in the six games since.
“Any type of injury like that you’re just disrupted, you’re uncomfortable,” Hornets coach James Borrego said. “These are highly-skilled athletes and any type of tweak like that can be a disruption. But I think he would say ‘that wasn’t a factor.'”

WILLIAMS INJURED
With Zeller already out and Walker hobbling, it was a bad time for the Hornets to lose starting power forward Marvin Williams, who left the game with a shoulder injury in the second quarter and did not return. He left the arena with his right arm in a sling and will have more medical tests on Monday to determine the extent of the injury, Borrego said.
“This is what you deal with in the NBA,” Borrego said of the sudden rash of injuries.

WHERE’S BATUM
Nic Batum, the team’s highest-paid player at five years for $120 million, has struggled for most of the season and was limited to two points on 1-for-7 shooting and played just 14 minutes. Borrego said he needs to do a better job of making sure Batum is more involved in the offense.

UP NEXT
Pelicans: Host Clippers on Monday night.
Hornets: At Timberwolves on Wednesday night.