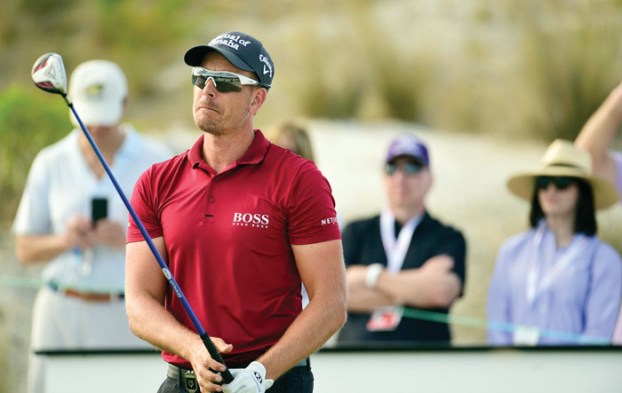 Sweden's Henrik Stenson reacts after hitting from the sixteenth tee during the first round of the Hero World Challenge at the Albany Golf Club in Nassau, Bahamas, Thursday, Nov. 29, 2018. (AP Photo/Dante Carrer)

Tony Finau had never seen Albany Golf Club until the pro-am at the Hero World Challenge, and one aspect of the course caught his eye immediately.

“When I’m playing well, I feel like I can score on any golf course, especially a course that has five par 5s,” Finau said.

He made birdie on four of them Saturday, leading him to a 5-under 67 that gave him a share of the lead with Henrik Stenson and Jon Rahm and set up a wide-open conclusion that could feature more than half the 18-man field.

The tournament host is not among them.

Tiger Woods took three shots from just off the green at the par-5 third hole — chipping is tough on everyone at Albany — for a double bogey and a ragged start that never got much better until a few late birdies salvaged a 72.

He was in last place, 11 shots out of the lead.

“It’s definitely not alarming, for sure,” said Woods, in his first 72-hole event since winning the Tour Championship. “I just haven’t played clean.”

Stenson and Finau are going for their first victory of the year, even though this holiday event is not attached to any tour and is considered unofficial except for the world ranking points, which are more than four of the domestic events in the fall on the PGA Tour.

Finau did everything right except win this year, including his first Ryder Cup appearance. Stenson has won at least once around the world in five of the last six years.

Winning is always nice,” said Stenson, a runner-up to Hideki Maruyama two years ago in the Bahamas. “It never gets old no matter how big or small the tournament. You can’t say that this is a small tournament given the field. Who you’re playing against is obviously going to give you a nice boost if you managed to win it.”

Gary Woodland, who was over par toward the end of his opening round, had a 67 and suddenly is only two shots behind. Rickie Fowler also had a 67, and suddenly the defending champion is back in the mix at three shots behind.

Fowler’s name was mentioned more than once Saturday. A year ago, he started seven shots behind and closed with a tournament-best 61 to win by four.

“If you get wind all day, you don’t expect people to low,” Rahm said. “But I don’t think they did last year, and Rickie shot 11 under, right? I’ve kept saying it the same way.  I think whoever plays the par 5s … with the better score’s going to have a chance.”

Advantage Finau, at least over the last two days.

He decided to add 2 degrees of loft to his putter after opening with a 72, and he has followed with rounds of 64-67. Most of that is due to the par 5s, which he has played in 9 under the last two rounds.

“We play a lot of golf courses on the PGA Tour where there’s only two or three, so to be able to have those couple extra par 5s, you just know you’re going to have some opportunities to score,” Finau said. “And I’ve been able to take advantage of those opportunities on those par 5s.”

Saturday had plenty of action beyond the birdies.

Dustin Johnson, one shot out of the lead, took two chips and one putt to get up the slope right of the green on the par-3 second and made triple bogey. He was 4 over for the round after two holes, got it back to even par at the turn and had to settle for a 72. He still was only four shots behind, along with Xander Schauffele (66).

Patrick Cantlay also made triple bogey on No. 2 — playing with Johnson, giving them a combined score of 12 on the par 3 — after chipping over the green and taking two shots to get on. He also was the only player in a rain suit this week, but only to step into the water on No. 12 to play a shot.

Alex Noren had a 70, but it was far from dull. The Sweden made eagle on the par-5 15th, followed that with a triple bogey on the 16th, and then responded with an ace on the par-3 17th. That would be eagle-triple bogey-eagle for those scoring at home.

He isn’t putting a lot of stock into an event, and he wasn’t about to make any comparisons to his return to golf in the Bahamas last year.

From staff reports CHINA GROVE — Carson’s girls basketball team  improved to 5-0 on Saturday with a 61-35 romp against... read more