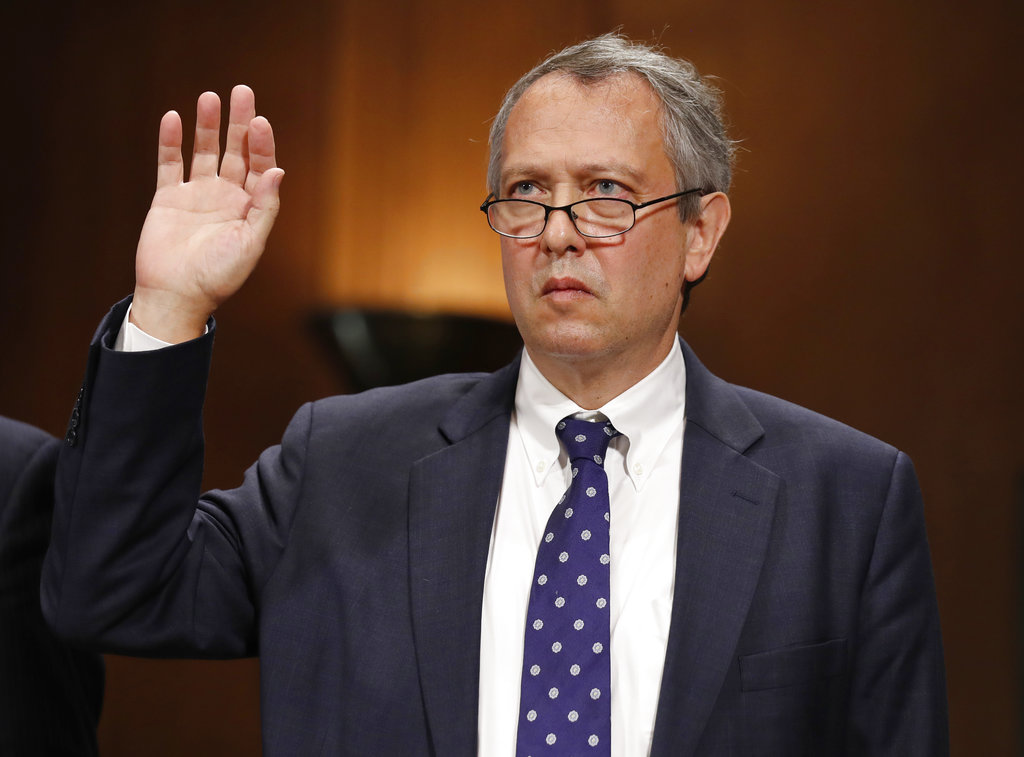 Thomas Farr is sworn in during a Senate Judiciary Committee hearing on his nomination to be a District Judge on the United States District Court for the Eastern District of North Carolina, on Capitol Hill in Washington. (AP Photo/Alex Brandon, File)

By Colbert I. King

Back in September 2016, eight weeks before Election Day, I wrote these words about Donald Trump:

“Repulsive though he is, nominee Trump’s character defects aren’t what make him a threat. What does sicken and alarm, and what ought to concentrate African American minds, is the thought of Trump with the powers of the presidency in his hands. Therein lies the danger.”

I admit that, at the time, I did not fully appreciate just how damaging and degrading a Trump presidency could become. Trump’s two years of shameless and cynical exploitation of fears and anxieties within the ranks of his white base of support, and his unprincipled governance, have left this country more fractured along racial lines than at any time since the civil rights revolution.

The Trump effect has drawn the attention of The Washington Post, the FBI, the Anti-Defamation League and other entities concerned about the hatred he has let loose in the land.

Shootings, bombings and other acts of violence motivated by right-wing political ideologies are nothing new, according to a Post analysis of global terrorism data. But it found that “violence by white supremacists and other far-right attackers has been on the rise since Barack Obama’s presidency – and has surged since President Trump took office.”

The FBI’s report released this month revealed that hate crimes had jumped an astonishing 17 percent from 2016 to 2017. And the targets? Sixty percent of the victims were selected because of their race, ethnicity or ancestry. More than 20 percent were targeted because of their religion.

The ADL reported an increase of nearly 60 percent in anti-Semitic incidents between 2016 and 2017.

Anecdotal evidence and data compiled each day show that the Trump effect has taken on a life of its own, spreading a meanness and animosity once confined to the environs of the Ku Klux Klan and the White Citizens Councils that peppered the South.

The hard evidence of Trump’s hostility toward people of color abounds – his actions against south-of-the-border immigrants, his hostile treatment of black women and disparagement of black and brown men, references to Haiti and African nations as “shithole countries.”

And it’s being demonstrated through his federal judicial appointments. Trump’s racial animosity can’t get anymore obvious than his choice of Thomas Farr to be a district court judge in North Carolina.

Farr is well known for his work as a lawyer defending a 2013 North Carolina voter ID law ruled discriminatory against African Americans. The federal appeals court that struck down the law called it “the most restrictive voting law North Carolina has seen since the era of Jim Crow,” saying it targeted black voters “with almost surgical precision” because the forms of voter identification North Carolina deemed acceptable were ones disproportionately used by white people.

Farr also worked on the re-election campaign of Sen. Jesse Helms, R-N.C., in 1990 that the Justice Department said sent more than 120,000 postcards to African American voters telling them that they were ineligible to vote and might be arrested if they tried.

D.C. Del. Eleanor Holmes Norton (D) and two other members of the Congressional Black Caucus wrote in a letter last year to the Senate Judiciary Committee opposing Farr’s nomination that “it is no exaggeration to say that had the White House deliberately sought to identify an attorney in North Carolina with a more hostile record on African-American voting rights and workers’ rights than Thomas Farr, it could hardly have done so.”

There it is. Trump knew what he was doing, and what the nation would be getting, when he chose to put Thomas Farr on the federal bench – a voter suppression advocate after Trump’s own heart.

Trump’s selection of Farr was so odious that South Carolina’s Tim Scott, a lone black Republican senator with unquestioned loyalty to conservative dogma, finally had to break ranks and declare his opposition to Farr’s nomination. Scott’s courageous decision will almost certainly doom Farr’s chance for a federal judgeship.

But it’s not likely to quench Trump’s thirst for actions that fall within the purview of his discriminatory values. Watch out: He has yet to name a permanent replacement for fired Attorney General Jeff Sessions.

That is the danger of Donald Trump with presidential power in his hands. A lesson now being learned the hard way.

King writes a weekly column for The Washington Post that runs in print on Saturdays. In 2003, he won the Pulitzer Prize for Commentary. King joined the Post’s editorial board in 1990 and served as deputy editorial page editor from 2000 to 2007.