Cokie and Steven Roberts: The tide of truth keeps rising 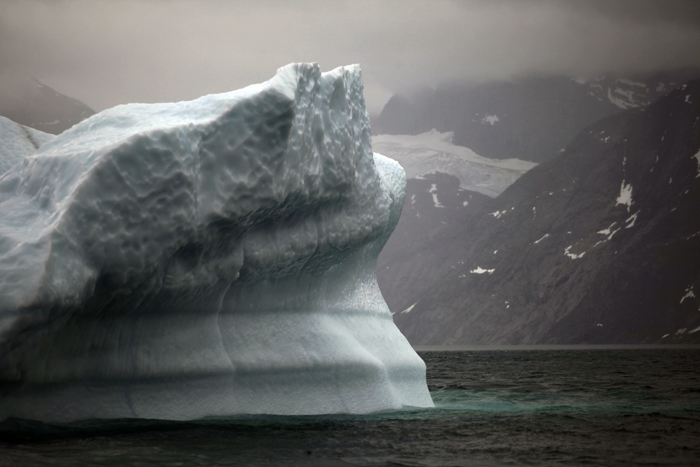 In this July 26, 2011, photo, a melting iceberg floats along a fjord leading away from the edge of the Greenland ice sheet near Nuuk, Greenland. Massive ice sheets in western Antarctica and Greenland are melting much faster than scientists figured a quarter century ago. Greenland has lost more than 5 trillion tons since 1992. Brennan Linsley/Associated Press file photos

With those four words, President Donald Trump dismissed a 1,656-page report written by about 300 scientists from 13 government agencies documenting the devastating impact of climate change.

“Observations collected around the world provide significant, clear and compelling evidence that global average temperature is much higher, and is rising more rapidly, than anything modern civilization has experienced, with widespread and growing impacts,” the report concluded.

Yet the president offered no evidence to support his position, apart from the ridiculous assertion that an unusually cold Thanksgiving undermined the report, which was mandated by Congress and took four years to complete. Trump’s entire view of climate change is based on fiat, not fact; on theology, not science.

“This is a new frontier of disavowance of science, of disdain for facts,” William K. Reilly, who headed the Environmental Protection Agency under President Bush 41, told The New York Times.

The president’s “disdain for facts” in the climate change debate is hardly a new or isolated example. Trump’s persistent denial of reality, and his assault on critics who call him to account, form the essence of his approach to public policy.

It’s one thing for him to spout outlandish claims at campaign rallies to stir up his troops. It’s a far more dangerous development when his delusions become the basis for government decisions.

David Axelrod, a senior adviser to Barack Obama, described Trump’s approach to the presidency in the Times: “There are no governing rules — one doesn’t have to be governed by rules or facts. Whatever it takes to get what you want or to get to where you want, no matter what you have to justify or what you have to ignore, is OK.”

Take taxes. Treasury Secretary Steven Mnuchin maintained that the president’s massive tax cut would “pay for itself with growth,” even though most economists said that would never happen. The doubters, of course, were correct, and the Congressional Budget Office recently estimated those tax cuts will add more than $1 trillion to the national debt.

Or take trade. The president defied mainstream economic thinking and tweeted last March that “trade wars are good and easy to win.” But Trump’s escalating battle with China is damaging many American businesses, including TV-maker Element Electronics, which closed its plant in South Carolina and laid off 126 workers.

“The layoff and closure is a result of the new tariffs that were recently and unexpectedly imposed on many goods imported from China,” the company explained.

And yet the president airily dismissed the finding of his own intelligence agency, saying, “Maybe he did, maybe he didn’t.”

This rejection of reality was too much even for Trump loyalists like Sen. Mike Lee, a Utah Republican, who told NBC, “I disagree with the president’s assessment. … The intelligence I’ve seen suggests that this was ordered by the crown prince.”

Trump disdains not just facts, but fact-finders. He regularly attacks federal judges who rule against him. After he derided one critic of his asylum policies as an “Obama judge,” he drew a sharp rebuke from Chief Justice John Roberts, who said, “That independent judiciary is something we should all be thankful for.”

But Trump apparently has no conception of an independent judiciary — or an independent Justice Department, for that matter. The Times reports that the president wanted his attorney general to prosecute two of his political enemies, former FBI Director James Comey and Hillary Clinton. He was deterred only when his White House counsel, Don McGahn, warned such an action could trigger impeachment proceedings.

Trump is a modern version of King Canute, the legendary English monarch who placed his throne on the seashore and ordered the tide “not to rise onto my land, nor to wet the clothes or body of your Lord,” according to a 12th-century account by Henry of Huntingdon. “But the sea carried on rising as usual without any reverence for his person and soaked his feet and legs.”

When Canute saw that his denial of evidence and science was futile, he learned humility and concluded that “all the inhabitants of the world should know that the power of kings is vain and trivial.”

Trump is getting drenched daily by his disdain for facts, but unlike Canute, he shows no signs of humility. And the tide of truth keeps rising, well above his feet and legs.

A great day to remember