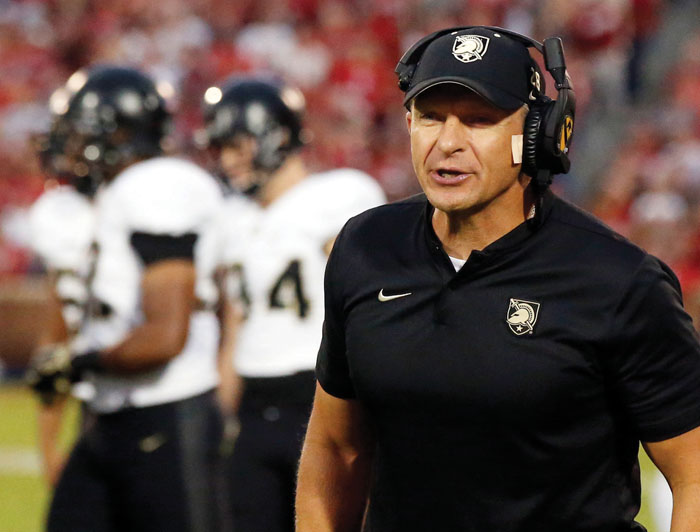 FILE- In this Sept. 22, 2018, file photo, Army head coach Jeff Monken shouts in the first half of an NCAA college football game against Oklahoma in Norman, Okla. For all the complaints about too many bowls, this is the second straight season there will be more bowl eligible teams (at least 81) than available bids (78). That has put No. 23 Army and fellow football independent BYU (6-6), another school with a large national following, in the strange position of tracking results from all over the country in recent weeks and heading into college football's selection Sunday with postseason plans more uncertain than most. (AP Photo/Sue Ogrocki, File)

For all the complaints about too many bowls, this is the second straight season there will be more eligible teams (at least 81) than available bids (78). That has put Army and BYU (6-6), a fellow independent that also has a large following, in the strange position of tracking results from all over the country in recent weeks. Both head into bowl selection Sunday with postseason plans more uncertain than most.

The chances are good Army will get a bid while Miami (Ohio) and Wyoming might not be so lucky.

That it is not a sure thing for the Black Knights, who haven’t lost since going to overtime at Oklahoma in September, shows how odd the bowl system can be.

“I hope it doesn’t happen,” linebacker Cole Christiansen said about Army being shutout. “We’re in the Top 25 so I really hope we get to a bowl game. It is kind of tough, but it’s not the end of the world if it turns out that way.”

Athletic director Boo Corrigan has been working on Army’s postseason problem for months since the program entered the season without a contracted bowl partner — and this is no time to be a free agent on the bowl market.

The days when bowl organizers could pick and choose teams to invite are long gone. Now conferences lock up bowl spots for their teams years in advance. All 39 bowl games are basically spoken for. Most current contracts were negotiated in 2012 and 2013 to coincide with the launch of the College Football Playoff in 2014 and run through 2019.

That was a tough time to sell Army football. The Black Knights had one bowl-eligible season (at least six victories) from 1997-2013. As recently as 2015, Army went 2-10. But coach Jeff Monken has orchestrated an impressive turnaround. Army won seven regular-season games in 2015 and made its first bowl appearance since 1996, winning the Heart of Dallas Bowl against North Texas.

Last season, the cadets did even better, beating San Diego State in the Armed Forces Bowl to finish 10-3.

“The good thing for us is the next cycle will be 2020-25 and we can go into that cycle as an independent showing that we have been bowl eligible, showing that we’re a viable team to fill that slot,” Corrigan said.

“It’s a weird dynamic in our profession to want someone not to win,” Corrigan said.

“It was nerve wracking,” he said.

It also speaks to the role lower-tier bowls now play in college football.

“Bowls have a tremendous impact on the regular season,” said Wright Waters, executive director of the Football Bowl Association. “We go into the last week of the season and there were people that were trying to get bowl eligible, and so you have games that are suddenly meaningful that 10 years ago 15 years ago meant nothing because … they weren’t going anywhere.”

BYU’s television deal with ESPN since going independent in football in 2011 has given the Cougars access to bowls from San Francisco to Miami Beach. ESPN Events owns and operates 14 bowls. BYU had been penciled in for the Poinsettia Bowl in San Diego, but that game went under before last season.

“And that’s why even though we have an agreement with ESPN that they’ll put us in a game we’re not going to know what game that is until the dominoes fall,” Holmoe said.

Every conference championship game this weekend affects the bowl lineup and can create openings or fill spots, depending on which teams land in the four-team playoff or New Year’s Six games.

For example, if Oklahoma wins the Big 12 and reaches the playoff that would put Texas in the Sugar Bowl and leave the Armed Forces Bowl in Fort Worth, Texas, with an open spot. Perfect for Army, presumably.

And then there is Virginia Tech, which is 5-6 and playing Marshall on Saturday to make up for a game canceled by Hurricane Florence — but also in hopes of getting that crucial sixth win. The Hokies could give the Atlantic Coast Conference 11 bowl-eligible teams to fill 10 spots it has contracts for.

All this goes back to the ongoing conversation about the ideal number of bowl games.

In 2015, with 40 games to fill, there were not enough teams with six victories and the NCAA put rules in place to allow 5-7 teams to be eligible via Academic Progress Rate numbers. In 2016, two 5-7 teams were needed to fill bowl spots. Last season, with the number of bowls down to 39, three eligible teams (Buffalo and Western Michigan from the Mid-American Conference and UTSA from Conference USA) did not receive bids because all the spots were filled.

Army and BYU are good draws at the box office and on television. A bowl with an opening will likely jump at either. Six-win teams such as Wyoming from the Mountain West, Miami (Ohio) from the MAC, Southern Mississippi from Conference USA and Louisiana-Monroe from the Sun Belt are far more likely to be left out. Eastern Michigan (7-5), understanding it could get squeezed, took to social media to make its case with a music video earlier this week.

Army probably won’t have to resort to lip syncing pop songs, but Corrigan won’t be totally at ease until an invite is in hand.

“We’ve been living and dying for six weeks,” he said.