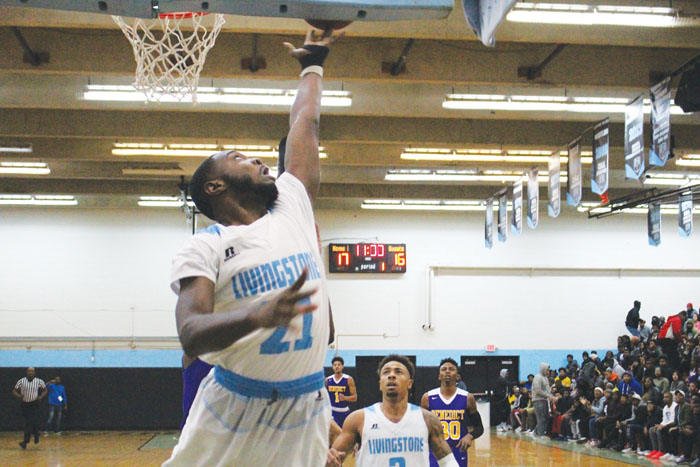 SALISBURY — It was the kind of victory that raised more questions than it answered.

“We should have finished this game off in a way that leaves no doubt,” he said after the Blue Bears (5-2) held on and won their third straight. “Instead, it’s one that sends signals for us. And those signals are that everyone can’t play at the pace or in the time-frame we’re giving them. We all need to put forth more effort than this.”

Granted, a triumph against winless Benedict (0-7) doesn’t register seismically — especially with some tougher CIAA assignments looming just two weeks from now. But Livingstone did shoot 51.7 percent from the field and out-rebounded the undersized Tigers by a 50-36 margin. And it did use a 19-3 run to close the first half that erased an unexpected early deficit.

“I just thought we could have played better as a unit,” super-sub Malik Smith said. “We weren’t fundamentally sound. In the second half we weren’t getting back on defense and getting lackadaisical.”

Senior Roger Ray shot 8-for-13 from the field and led LC with a season-high 28 points, including 13 in the last 7:35. He added six assists and two steals in a prolific, 30-minute performance. But even the all-conference guard was subdued after the Blue Bears barely broke par.

“We don’t get complacent,” Ray said. “But we’ve got to get back to work. We really need to get back into the swing of things and take control again.”

It took Livingstone until late in the opening half to find any traction. Benedict played a nerve-rattling, zone defense that took the Blue Bears out of their comfort zone and forced them into low-percentage shots. When 6-5 junior Ricky Peterson hit a 3-pointer from the left side with 5:47 remaining in the half, the Tigers owned a 28-26 edge.

“Once again, our lack of execution hurt us,” Stinson said. “We can’t use the excuse of being young anymore. We’ve got to do a better job of playing our game and finishing teams off.”

The game turned as the first half ticked to a close. Ray’s 3-ball from the right side put Livingstone ahead for good. Two minutes later Navar Elmore took a pass from his twin brother Lydell (9 points, 11 rebounds) and scored on a major league dunk, providing a 35-28 lead.

“The point-guard passed the ball to my brother,” Navar explained after making 5-of-6 field goal attempts and scoring 11 points. “He caught it in the air and — without dribbling — flipped it to me for an open shot. It helped me get some of my confidence back.”

And helped the Blue Bears sprint into their locker room with the wind at their backs and a 45-31 halftime lead.

“Turnovers,” said BC coach Artis Maddox. “They must have scored a lot of points off turnovers during that time. If we had avoided that run and finished with the kind of effort we started with, maybe we win the game. We tried to fight them but they were way more athletic and just bigger than us.”

Livingstone led by as many as 19 points on two occasions in the second half — first when Lydell Elmore beamed in a 3-pointer to make it 50-31, and moments later when 6-10 Kenny Grant muscled inside for a layup with 16:52 remaining. Benedict closed within 10 on a Jasiah Perry lay-in with 6:38 to go, then scrambled as close as 82-73 following DeShawn Graham’s trey from the top of the key with 1:31 on the clock. Down the stretch, LC converted three of six free throws and skidded across the finish line.

“We should have been more dominating,” Navar Elmore said. “It’s like we just let that team stick around. If we’re going to win a championship, we’ve got to be more dominating that we were tonight.”

If nothing else, that would answer some of Stinson’s questions.

“Navar means that,” he said. “He’s the one who will tell you exactly what he means. The proof is in the pudding out there on the floor. You can’t just talk about executing. You’ve got to execute.”

NOTES: Stinson was recognized at halftime for cataloging his 200th coaching win for Livingstone. It came last February in a first-round victory over Elizabeth City State in the CIAA tournament. Last night’s win gives him 205 for the Blue Bears and 477 in a distinguished career. … Smith had a double-double, finishing with 13 points, 10 rebounds and three of LC’s six blocked shots. … Livingstone visits Paine College on Monday night, then breaks for end-of-semester exams. It opens conference play Dec. 15 at Virginia Union.