Cowboys have reason to think big after ending Saints’ streak 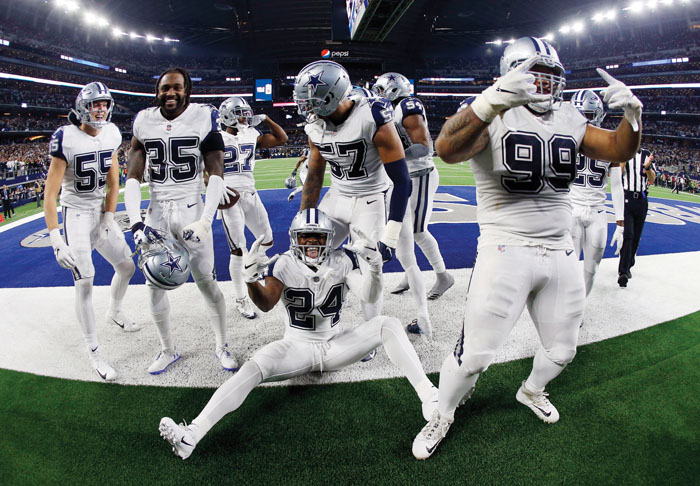 By SCHUYLER DIXON, AP Pro Football Writer
ARLINGTON, Texas (AP) — Leighton Vander Esch howled through the open retractable roof after a booming tackle on a huge third-down stop negated by a potentially crushing roughing-the-punter penalty.
Jourdan Lewis answered an ominous fumble by quarterback Dak Prescott that gave Drew Brees another chance by intercepting the MVP contender , putting the Dallas Cowboys in position to finish off a victory that stopped New Orleans’ 10-game winning streak.
When owner and general manager Jerry Jones talked of the season changing in a 13-10 win over the NFC’s hottest team Thursday, he had the rookie linebacker whose nickname is “Wolf Hunter” and a confident backup second-year cornerback in mind.
That’s just to name a couple of players on a team that might now dare to think an NFC East title is just the beginning. The Cowboys (7-5) will have another important game in pursuit of that division crown Dec. 9 against Philadelphia, the last of three straight home games.
“When you win a game like this, it changes you,” Jones said after Dallas’ fourth straight victory guaranteed at least a share of the division lead and the inside track to a home wild-card playoff game going into the final quarter of the season.
“This is a young, impressionable bunch. And so they know now that they can go out there and play our game and play it in a way to beat an offensive machine. I just am so proud for them because they are not going to be the same kids that looked in the mirror this morning.”
The defense kept the Cowboys in games, and ultimately in the playoff hunt, while the offense mostly struggled through the first half of the season.
While the score against the Saints indicated a similar formula, Prescott had 194 yards passing at halftime and finished 24 of 28 without an interception. The third-year pro led a nearly seven-minute drive in the fourth quarter before his fumble with the Cowboys in position for a field goal.
The Cowboys held the ball for more than 21 minutes in the first half and had 100 yards rushing against the NFL’s No. 1 run defense. Making Brees a spectator fit the signature of the Dallas offense, and the same objective will be in play when Carson Wentz visits.
“We didn’t make enough plays on offense,” Prescott said. “We left plays out there. But when we have the defense that we have versus an offense like that, how can you not be confident?”
Vander Esch shared credit for the tackle with Daniel Ross when Mark Ingram was dropped for a 1-yard loss on third-and-2 late in the third quarter. But Randy Gregory ran into punter Thomas Morstead, and Brees threw his only touchdown pass two plays later.
The Cowboys forced a punt on the next New Orleans possession, and Brees didn’t get another chance after Lewis’ interception with 2:08 remaining.
“The battle is won, but the war has just begun,” said defensive end DeMarcus Lawrence, who forced two fumbles by Brees on sacks but only got credit for one because of an offside penalty. “The rest of the league sees how we are playing football and they will want a piece of us. We have to stay focused and get to work every week.”
Dallas doesn’t have off-the-charts numbers on defense, but the most impressive one just got better. The NFL’s third-best scoring defense held the league’s highest-scoring offense 27 points under that average. The Saints had their fewest yards by nearly 100.
The Cowboys’ season was on the brink less than a month ago at 3-5. Now it would be hard to find a more confident team.
“We have a lot of talent, a lot of young talent, a lot of great players with very bright futures,” said 23-year-old NFL rushing leader Ezekiel Elliott. “But we’re 100 percent not in a place where we can get comfortable. Division up for grabs. We’ve just to make sure we finish this season off the right way.”
NOTES: Coach Jason Garrett said WR Cole Beasley sprained a foot against the Saints, but said the team is hopeful the injury won’t be long term. … Garrett said he was optimistic LT Tyron Smith would play against the Eagles after missing two games with a neck issue.
___
More AP NFL: https://apnews.com/NFL and https://twitter.com/AP_NFL