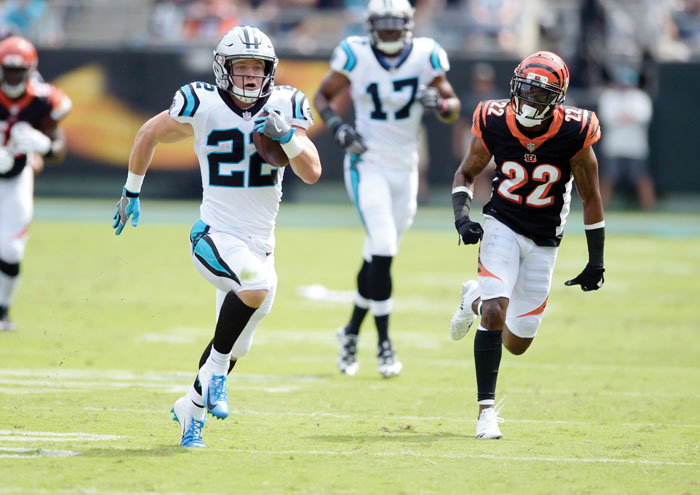 By STEVE REED, AP Sports Writer
CHARLOTTE, N.C. (AP) — When Carolina’s Christian McCaffrey ripped off a 59-yard run against the Seattle Seahawks, there was no tapping his helmet.
He wasn’t coming out of the game.
The second-year running back told Cam Newton in the huddle before the next play “I’m ready to go,” then took a handoff on the next play and picked up another 15 yards.
“Any other average running back would’ve tapped his head and said, ‘I need a blow,'” Newton said.
McCaffrey has been the Energizer Bunny of the Panthers’ offense, playing in 97 percent of the team’s offensive plays through 11 games — the most in the NFL.
And he’s showing no signs of letting up.
He became the first Carolina player in franchise history to eclipse 100 yards rushing and 100 yards receiving in the same game last Sunday. Despite the loss to the Seahawks, his 237 total yards set a franchise record.
Entering Sunday’s game at Tampa Bay, McCaffrey is fourth in the NFL in total yards from scrimmage with 1,365. He has 757 yards rushing and five touchdowns, 608 yards receiving yards on 71 catches and five more TDs.
McCaffrey said he never really gets tired — and if he does, he just ignores it.
“I don’t think of it,” McCaffrey said. “When I’m in the game there is so much adrenaline. I never really feel like I’m gasping. You have to push through that.”
“He doesn’t look like it is wearing on him,” said Panthers coach Ron Rivera, whose team is looking to snap a three-game losing streak. “He works hard at everything he does and takes care of himself the way you expect a pro to do. Our other young guys can learn from that example.”
The 5-foot-11, 205-pound McCaffrey is proving to everyone he’s not too small to be an every-down — and basically every-play — running back.
Newton said McCaffrey is always out to prove something and bristles when someone calls him a “small” running back.
“When they take you at the eighth pick, you have a lot of people counting on you,” McCaffrey said. “So I knew it was going to be a pivotal (role). But at the same time, you still have to earn everything. And that’s kind of my mindset, how it’s always been.”
Said Newton: “C-Mac has defied all odds. The thing that has always put me at comfort with C-Mac is he’s always been a workhorse. He’s always been a playmaker. There’s no denying that. C-Mac was everything (we thought he could be), and a bag of chips.”
McCaffrey believes that players like McCaffrey, Le’Veon Bell, Todd Gurley and Alvin Kamara are changing the running back position in the NFL.
“Those guys are all-down backs,” Newton said. “And they can take a screen pass, score. They can take a trap, score. They can block in the pass game. They’re everything. And they’re changing the game. My hat goes off to all of those guys knowing that they’re a part of the evolving of the game, just like dual-threat quarterbacks.”
___
More AP NFL: https://apnews.com/NFL and https://twitter.com/AP_NFL

Chiefs cut Hunt after running back lands on NFL…