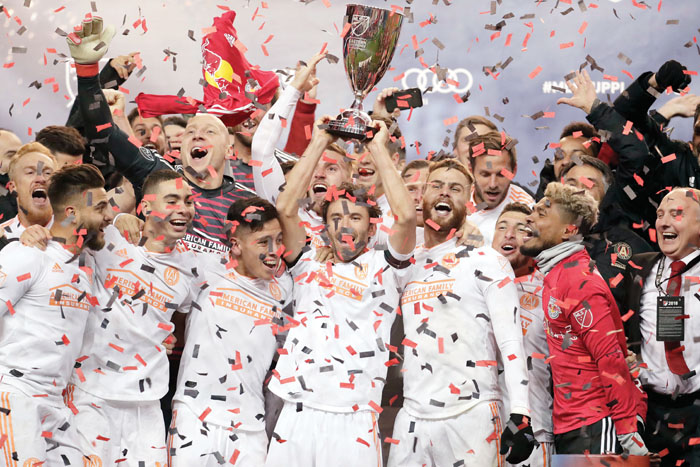 HARRISON, N.J. (AP) — The whistle blew, ending what had long been inevitable, and Atlanta United players turned their attention to Dec. 8 — the chance to win just the second professional sports title in the city’s history

In just its second season, Atlanta will host Portland in Major League Soccer’s championship match before what surely will be the largest crowd for an MLS Cup, 70,000-plus at Mercedes-Benz Stadium.

“This isn’t just for us in this locker room and this club and organization. It’s much bigger than that,” goalkeeper Brad Guzan said after Atlanta completed a 3-1 aggregate win over the New York Red Bulls in the Eastern Conference final on Thursday night. “It’s going to be electrifying. It’s going to be fantastic on so many different levels.”

Guzan’s punchout led to a by-then meaningless goal in the fourth minute of second-half stoppage time. Daniel Royer headed the ball back in front of goal, and Tim Parker kicked the ball in to give the Red Bulls a not nearly enough 1-0 win that followed last weekend’s one-sided defeat in Atlanta.

One of the league’s original teams, New York had the best regular-season record for the third time in six years and set a league record for points but remained without an MLS title in its 23 seasons. The Red Bulls have reached the conference final five times but advanced for the only time in 2008, when they lost the MLS Cup match to Columbus.

“They should be proud,” said coach Chris Armas, who took over in early July when Jesse Marsch left to become an assistant at sister club RB Leipzig of the Bundesliga. “It makes yourself ask yourself questions; What could I do more? How can I get better? Where can I improve?”

Atlanta’s only pro sports title was provided by the Braves in the 1995 World Series. United was knocked out by Columbus on penalty kicks in the first playoff round of its expansion. While impressed with the team’s organization and resources, players were surprised at the swift success this year.

With the temperature around 40 and an announced crowd of 22,137 on the late autumn night, Atlanta played with five men back and often 10 behind the ball in a classic “park the bus” defensive strategy. When Atlanta players fell to the ground following challenges, they often remained down for lengthy periods as time ran off the clock.

MLS scoring champion Josef Martinez, Franco Escobar and Hector Villalba had goals at home in the first leg last Sunday before 70,016. Atlanta set an MLS record by drawing 901,033 in the regular season, an average of 53,002. The record crowd for an MLS Cup was 61,316 at Gillette Stadium in Foxborough, Massachusetts, for the LA Galaxy’s 1-0 extra-time win over New England in 2002.

Atlanta’s crowd has fueled a 13-2-4 record at home in MLS play this year that includes a 48-20 goal difference. Under a change in playoff format MLS is considering, all playoff matchups would be one-game knockouts starting in 2019.

KANSAS CITY, Kan. (AP) — Diego Valeri scored a pair of goals, including one in stoppage time, and Portland beat Sporting Kansas City 3-2 on Thursday night to advance to MLS Cup for the second time in four years.

Sebastian Blanco also scored in the second half for Portland, which didn’t even need Valeri’s clinching goal. The teams had played to a scoreless draw Sunday in Portland in the first leg of their aggregate-goal Western Conference final, and with road goals being the tiebreaker, the Timbers were assured of playing for a championship even when the score was 2-2.

The Timbers will visit Atlanta United on Dec. 8 to play for the league title. Atlanta beat the New York Red Bulls 3-1 on aggregate to win the Eastern Conference final series.

Daniel Salloi scored in the first half and Gerso Fernandes scored in the 81st minute for Sporting KC, which still has not played for the MLS Cup since winning the 2013 title.

Sporting KC did control the first 45 minutes of the game, much to the delight of a sellout crowd that included Kansas City Chiefs stars Patrick Mahomes, Kareem Hunt and Travis Kelce. But the Timbers turned up the pressure in the second half, knowing any score-draw would send them through.

Blanco provided it when he made a nifty move near midfield and unleashed a driving shot — the first on goal for Portland all game. It somehow found the sliver between the outstretched hand of goalkeeper Tim Melia and the crossbar to knot the game 1-all.

The strike in the 52nd minute was followed by Valeri’s header off a rebound moments later, a goal that not only silenced the crowd at Children’s Mercy Park but led to a rather bizarre scene.

Fans in one corner of the stadium began throwing bottles and other trash at Portland players, and referee Mark Geiger brought both teams to the sideline. Sporting KC manager Peter Vermes then stalked more than halfway across the field to admonish his own club’s fans.

Sporting KC was left needing two goals to win the match and advance, and nearly got one of them in the 72nd minute. Johnny Russell’s free kick from about 15 yards glanced off Felipe Gutierrez’s head and sailed over the net as Portland goalkeeper Jeff Attinella exhaled.

Gutierrez put another shot on goal moments later that Attinella kicked away.

Fernandes finally got one of the goals Sporting KC needed, and the home crowd roared when it was announced that there would be nine minutes of stoppage time. But the Timbers managed to tamp down each attack by Sporting KC, ultimately solving what had been a near-impossible riddle.

Sporting KC had been 15-2-4 in home playoff games, their only losses coming in 1997 and 2011. Sporting KC also had been 12-2-5 at Children’s Mercy Park this season, losing just three times in 48 matches across all competitions in one of the toughest venues in all of Major League Soccer.

The Timbers made it four defeats on Thursday night.

“We would have played every game at home this year,” New York midfielder Tyler Adams said, ruing the first-leg defeat.

Martinez nearly scored 12 seconds in , which because of the away-goals tiebreaker would have forced the Red Bulls to get at least five goals in order to advance.

Jeff Larentowicz played the ball from his own half of the field to Darlington Nagbe, who took a touch to slow the ball down and sprinted after it. Adams’ clearance attempt ricocheted off Nagbe to Martinez, who sped past Parker and took a left-footed shot from just inside the penalty area. Luis Robles made a kick save with his right leg to keep New York’s chances alive.

“There was a part of me that thought, man, maybe tonight is going to work out. Tonight’s going to be our night,” Robles said.

New York appeared to go ahead for a moment in the 80th minute. Following a corner kick and a short initial punchout, Guzan had the ball in both hands above his head when New York’s Aaron Long crashed into him and sent the ball in. But the goal was disallowed on a video review .

Atlanta coach Tata Martino, who already has said he is leaving after the season, will get one more match at the club level. He appears set to take over Mexico’s national team.

Adams likely played his last match for the Red Bulls. He was one of the last players to leave the field, taking time to talk with family and fans. The 19-year-old midfielder probably will transfer to RB Leipzig.

“We’ll find out in the next couple of days, hopefully,” he said.