PPT Youth get ready to present the heartwarming classic, ‘A Christmas Story’ 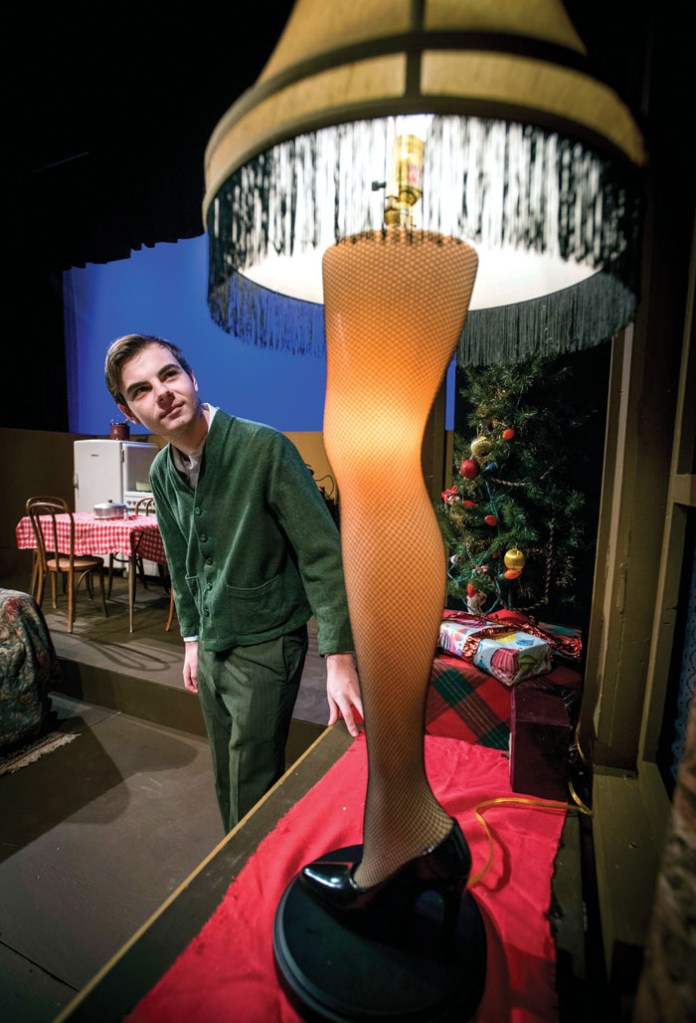 The Old Man, portrayed by Zach Stevenson, looks at the leg lamp that was sitting in the window. JON C. LAKEY / SALISBURY POST

Ralphie is on a quest to get the ultimate Christmas gift from Santa Claus, but no one is on his side. He constantly hears “You’ll shoot your eye out!” from everyone including his mother, his teacher, and even Santa Claus himself at Higbee’s Department Store. What is a kid to do? Join Ralphie on his quest this December at the Norvell Theater with Piedmont Players Theatre Youth as they present the classic, “A Christmas Story.”

Humorist Jean Shepherd’s memoir of growing up in the midwest in the 1940s follows 9-year-old Ralphie Parker in his journey to get a genuine Red Ryder BB gun under the tree for Christmas. All the elements from the beloved motion picture are here, including the family’s temperamental exploding furnace; Scut Farkas, the school bully; the boys’ experiment with a wet tongue on a cold lamppost; the Little Orphan Annie decoder pin; Ralphie’s father winning a lamp shaped like a woman’s leg in a net stocking; Ralphie’s fantasy scenarios and more.

“This Christmas classic is just as much fun on stage as it is on screen!” says Reid Leonard of Piedmont Players. “The audiences will love seeing their favorite scenes they have grown to love played live in the Norvell. Bring the whole family to enjoy this holiday show.”
A Christmas Story will be performed at the Norvell Theater, 135 East Fisher St. Performances are Dec. 7, 8, 13, 14, 15 at 7:30 p.m. and Dec 8, 9, 15 at 2:30 p.m. Tickets are $12 for adults and $10 for seniors and students at 704-633-5471 or PiedmontPlayers.com

PPT announce auditions for ‘Lunch at the Piccadilly’

Piedmont Players Theatre is holding open auditions for “Lunch at the Piccadilly,” a wise, warm, and hilarious musical based on the novel by Clyde Edgerton.
Unable to keep up with the times, the Rosehaven retirement home is being sold to Ballard College. The quirky, indomitable senior citizens find some surprising solutions to their problems in this unpredictable new show that has been called “silly and soulful.”
Auditions will be held at the Meroney Theatre on the 3rd floor, 213 South Main St. Prepare 16-bars of a song of your choosing. Bring sheet music, marked and notated in the correct key for your voice range. An accompanist will be provided. In addition there will be cold readings from the script. Production dates are Jan. 31-Feb. 9.
Music and lyrics by Mike Craver; additional lyrics and music by Clyde Edgerton; developed by Steve Umberger. This production will be directed by Reid Leonard. Learn more at www.piedmontplayers.com or 704-633-5471.