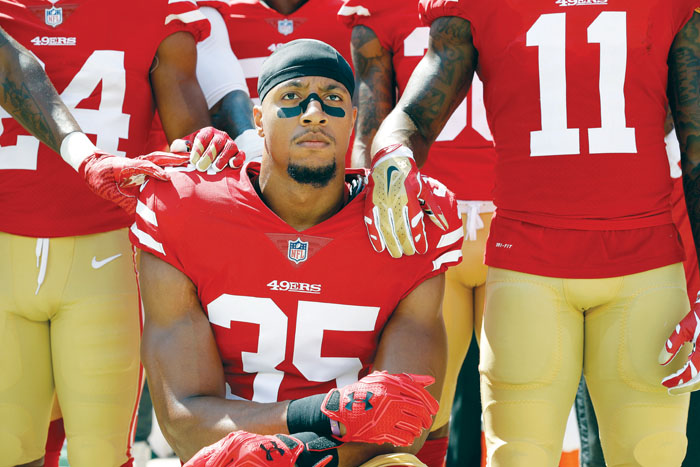 CHARLOTTE (AP) — Eric Reid says he’s being targeted by the NFL because of his pending collusion case after being drug tested five times since signing with the Panthers on Sept. 27.

Drug screenings throughout the NFL are random, but the Panthers safety says this year for him it has been “excessive.” He says in a normal 17-week season he’s tested “maybe twice.”

Reid believes the extra tests are related to fallout from his collusion case against the NFL which alleges owners conspired to keep him out of the league because of his decision to kneel during the national anthem to protest social and racial injustice.

Reid says “this doesn’t surprise me coming from them.”

The safety says he doesn’t have anything to hide since he’s never failed a drug test, but added it needs to be talked about because “it’s like stop-and-frisk — it’s just wrong.”

CHIEFS STAR SAFETY ERIC BERRY GETS BACK ON PRACTICE FIELD

KANSAS CITY, Mo. (AP) — Eric Berry was back on the Kansas City Chiefs’ practice field Wednesday for the first time since early in training camp, the first step toward the star safety being ready for games.

When that could happen remains unclear.

Berry had torn his Achilles’ tendon in last season’s opener, but was back on the practice field over the summer. He began training camp and looked as if he’d be ready for the season, but then was sidelined by a troublesome heel problem that seemingly nobody completely understood.

Chiefs coach Andy Reid kept calling Berry “day to day,” even as it stretched to week to week and month to month, and has maintained ever since August that he was slowly getting better.

“We’ll just see how he’s doing. There’s no pressure there or any of that. Just see how he feels and take it play to play,” Reid said ahead of Wednesday’s afternoon practice. “I think he’s just as curious as we are to see how he feels. We’re going to go easy with him.”

It seems unlikely that Berry will be ready by Sunday, when the Chiefs (9-2) play their first game after a bye in Oakland. But there will be four more regular-season games, and getting Berry up to speed in time for what Kansas City hopes is a deep playoff run is most important.

“This week, next week, I don’t care. I just want to make sure he’s healthy,” Reid said. “The one thing about Eric, this is killing him to watch. He loves to play. It tears him up not to be out there, but at the same time we have to do it smart. Those juices get going and everything is OK.”

The five-time Pro Bowl selection certainly knows how to make a comeback.

Berry missed most of a season earlier in his career when he tore knee ligaments, and the injury to his Achilles tendon scuttled another season. Berry also missed the end of a season when he was diagnosed with cancer, only to be declared cancer-free by the following summer in time for training camp.

Berry has been around the team all season, juicing up the defense while helping a young secondary as a pseudo coach. He’s been in meeting rooms, traveled to road games and maintained a constant presence in the locker room, where his stuff is hung close to rookie quarterback Patrick Mahomes.

JACKSONVILLE, Fla. (AP) — Blake Bortles isn’t quite ready to focus on his future with the franchise.

For now, the Jacksonville Jaguars quarterback is trying to be supportive teammate.

Bortles will start a regular-season game on the bench for the first time since Sept. 14, 2014, serving as Cody Kessler’s backup against Indianapolis (6-5) on Sunday.

“I put myself in this position and didn’t play good enough,” Bortles said Wednesday, two days after getting demoted. “Didn’t win football games, couldn’t find a way to get it done. And when that happens, it’s a business and everybody understands that. I don’t think there’s anything personal involved. As a quarterback, I think you have one job and that’s to win a football game, and if you don’t do that, your time’s probably limited.”

Bortles sounded like someone who knows his time with Jacksonville is nearing the end.

Bortles signed a three-year, $54 million contract in February and will count $21 million against the salary cap in 2019. If the Jags cut him before June 1, they would still take a $16.5 million hit against the cap.

The fifth-year pro and third overall pick in the 2014 NFL draft seemed resigned to — at the very least — having to compete for the starting job next year.

“Yeah, I have no problem with competition or anything,” he said. “I’m not in charge of the decisions that are made. I obviously put myself in this position and forced their decision to be made, but at the end of the day, they’re in charge of making those personnel decisions. And if it’s a competition or if it’s, ‘See you later; you’re out of here,’ whatever it is, I love playing football and would love the opportunity to play again.”

“It’s always going to be a difference,” Marrone said. “Obviously, we have the same system. We aren’t going to be changing the terminology in a week. Cody played in this system and now he gets a full week of (practicing). I think that Scott knows what Cody can do obviously; he was his position coach. We’ll see when we get out there and see things during the week of what we’re going to be able to use.”

Kessler hasn’t taken many first-team reps since training camp, so he needs to develop some chemistry with his offensive linemen and receiving corps.

“There is a reason that every single player is here,” Kessler said. “You obviously want to have every guy out there that you can, but when you can’t, it is the same thing. Next man up, and we have guys that are going to be ready. And whoever is out there, everyone is competing and everyone is given an opportunity. I am excited. Everyone is here for a reason, and we are going to be ready to go.”

Bortles took the benching in stride, saying and doing all the right things in his reduced role. He said he learned from longtime Jaguars backup Chad Henne how to handle getting benched and being a career backup.

“One thing I’ve always said that I thought was one of the most incredible things I’ve ever seen is how Chad handled going from being the starter to the backup and how he was able to maturely handle that and be there for me and do whatever I needed or help me out in any way,” Bortles said. “Anytime I’ve ever been in that situation, that’s all I’ll try and do is kind of what he did and what I witnessed him do.

“It’s be a professional and handle it the way you should. It’s a job, and our job is to be here and try to win football games, and as a backup quarterback or any quarterback that’s not the starter you job is to help the starter and help the rest of the offense score points and win.”

The Chiefs have struggled at safety all season, signing veteran Ron Parker on the eve of the season because they were so short-handed. Daniel Sorensen broke his leg in training camp and only recently was back on the field, and rookie Armani Watts landed on injured reserve as he was getting up to speed.

Not surprisingly, the Chiefs have been gouged by opposing offenses most of the year.

They are allowing more than 400 yards and 26.7 points per game, both near the bottom of the league. Their pass defense is last at 297.2 yards per game, and their inability to get stops in the red zone has been due in part by the unsteady play of their safeties.

But beyond the physical boon Berry would provide is the emotional lift.

Yes, he’s been around the team all season. But offensive lineman Mitchell Schwartz said there’s a different feeling when one of the team’s longest-tenured and most vocal leaders suits up.

“He’s the guy that gets everybody hyped and ready to go,” Schwartz said, “and that’s team wide, whether it’s offense or defense. It’s great to have a guy like that around. We’ll see how that situation goes, but big for the defense and also big for the team.”

Notes: C Mitch Morse (concussion) returned to practice for the first time since getting hurt Oct. 14 in New England. … WR Sammy Watkins (foot) remained out of practice. He played a few snaps against the Rams before the bye before deciding that the injury was too severe to continue. It’s unclear when he will be ready again. … Reid gave a shout-out to Sporting Kansas City, the MLS club that plays Portland on Thursday night in the Western Conference finals. “Great for the city,” he said.