Other Voices: Medicaid we can agree on 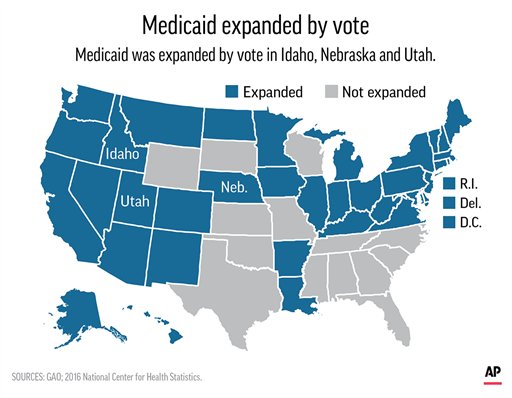 Medicaid expanded under the Affordable Care Act in all but 14 states. The issue appears to be up for debate in North Carolina now.

As many as 670,000 North Carolinians could gain sorely needed Medicaid coverage if Gov. Roy Cooper and members of both parties in the legislature will work together to help them.

Now that voters have restored some balance to the state’s power structure, that idea isn’t so far-fetched anymore. Voters elected enough Democrats on Nov. 6 to break the Republican supermajorities in the legislature, meaning that Cooper now has a credible threat of veto and Republicans won’t necessarily get their way on every issue.

Helping people in the state who lack adequate medical insurance ought to be something that everyone can agree on. That’s especially true since funding to expand Medicaid coverage is available.

North Carolina is one of only 14 states that still have not accepted the federal dollars made available through the Affordable Care Act. Medicaid is the federally mandated program that provides health care to poor children and their families, seniors and disabled people. A key provision of the ACA aimed to expand that mandate to more uninsured adults who can’t pay for health care. Many of these people work low-wage jobs; some are veterans.

The U.S. Supreme Court ruled that states couldn’t be forced to participate, and North Carolina’s leaders have thus far refused to do so. In 2013, legislators passed a law forbidding the governor to expand Medicaid without the legislature’s permission. Since Cooper took office, Republican leaders who strongly opposed the ACA have thwarted his attempts to expand Medicaid. One of their excuses is that they fear the federal government won’t provide all the money it has promised. That’s ridiculous.

There are, however, signs of bipartisan support for some form of expansion. Last year, Republicans, including Donny Lambeth of Forsyth County, introduced Carolina Cares, a bill that would expand Medicaid coverage while including a work requirement and modest premiums. Some Democrats signed on as co-sponsors. Senate leader Phil Berger and his colleagues made sure there was no action on the bill during the 2017-18 sessions. They didn’t even allow the sponsors to explain their plan.

One of their stated objections is the fear that expansion would be too expensive for the state, but that rang hollow in July, when the Senate killed a bipartisan House bill that simply would have allowed a study of the cost. It’s uncertain whether federal regulators would approve the Carolina Cares approach, but the first step is to pass a detailed bill.

Lambeth says he plans to introduce Carolina Cares again next year. That bill may not be the ideal approach to expanding Medicaid, but a debate on its merits could at least get things moving. It also may help that the state is making progress in talks with federal regulators to switch its Medicaid program to a managed-care system with a “whole body” approach rather than the current fee-for-service system, something Republicans have wanted.

Cooper had it right when he said after the recent election that Medicaid expansion shouldn’t be a partisan issue. Leaders — including Republicans — in most other states have managed to cooperate on Medicaid expansion for the good of people who need the help. North Carolina’s leaders should find a way to do the same.