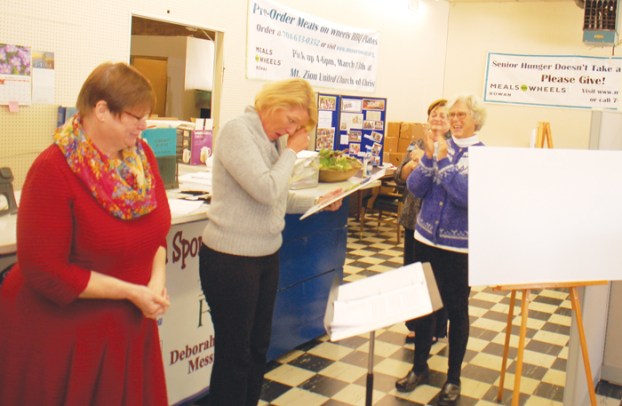 Connie Basinger, center, sheds a tear Tuesday after hearing she is the first-ever recipient of a Meals on Wheels Award named especially for her — the Connie Basinger Award — for her service to the organization over the past 11 years. Others, left to right, are Irene Beyer, Cindy Fink and Pat Murtaugh. Mark Wineka/Salisbury Post

Meals on Wheels Rowan hands out honors, looks to the future

It was a day for saying goodbyes, hellos and thanks for Meals on Wheels Rowan, a 42-year-old organization that provides lunches five days a week to 225 clients throughout Rowan County.

Under the thank-you category, the organization announced the establishment of the Jean Anne Ferrier Ramsay Giving Circle, taking in people who provide planned gifts to Meals on Wheels.

The late Ramsay, who most people knew as Anne, was the local Meals on Wheels’ first president. Her children have presented Meals on Wheels $10,000; interest earned on it will go toward supporting the organization.

Three of the late Anne and John Ramsay’s children attended the annual meeting, including John from Raleigh, Anne Saunders from Salisbury and K.C. Ramsay, also from Raleigh. George Ramsay could not make it.

The families of John, K.C. and George Ramsay, the family of Anne and Frank Saunders and Dr. Norman Sloop, Johanna and Bruce Lovvorn and Fink have been inducted into the Giving Circle so far.

As for saying goodbye, Meals on Wheels paid tribute to one of its longtime leaders, Connie Basinger, who is stepping down as board president.

The board established the Connie Basinger Award and made Basinger herself the first recipient. Some tears were shed, by Basinger and others, as the surprise announcement was made.

Presenters of the award said Basinger made the homebound participants her No. 1 priority.

Incoming Vice President Irene Beyer credited Basinger with leading the organization through difficult times and change. She said Basinger “walks the walk by coordinating the Food Lion delivery team that delivers six times each month and delivering with her team.”

“She embraces the physical work that it takes to do fundraisers and move donated food,” Beyer added.

Board member Pat Murtaugh said Basinger envisions the future for Meals on Wheels while keeping a focus on the present.

“She supported new ideas for fundraisers,” Murtaugh said, “including the Valentine’s Day non-event and spring and fall lobster sales. She was the first one to show up for the barbecue sale and the last one to leave.”

Basinger credited Food Lion for allowing her to deliver meals on many Tuesdays and Thursdays and making sure she has the day off for the annual barbecue sale in March.

“It’s been a wonderful opportunity,” she said of volunteering for Meals on Wheels. “… This organization has done way more for me than I’ve done for it.”

The Connie Basinger Award will be presented each year to an individual who “gives of their time and energy and who demonstrates a passion for Meals on Wheels.”

At her discretion, Basinger gave out three President’s Awards for the first time, and she noted it was difficult to choose only three. “We may have some each year, we may not,” Basinger said. “It depends on the president.”

Those receiving President’s Awards and a personalized Meals on Wheels apron to go with it were Trent Bradshaw, Johanna Lavvorn and Rick Anderson McCombs.

Meals on Wheels recognized eight outgoing board of directors members, each of whom received a hand towel as a gift.

Robinson said Fink, as executive director, has been “a fantastic ambassador” for Meals on Wheels and has added value and structure to the organization, allowing it to be bigger and better.

Robinson pointed out the pressures of growth and the constant efforts needed to raise more money. Meals on Wheels Rowan has at least 50 people on its waiting list and more calling for services each month, he said.

Rowan County continues to gray demographically, Robinson noted, having more people over 65 than it does under 17.

Feeding one person over the year costs $1,875. On average, clients only pay 25 cents on the dollar toward the meals they receive.

Robinson said the MOW board wants to enhance its relationship with the hundreds of volunteers who help the organization. It also seeks to educate more people on what the mission is and what the agency does.

The organization looks to build more partnerships with towns and groups throughout Rowan, Robinson said.

One of the last things happening at Tuesday’s annual meeting was the naming of an Emeritus Board. The initial 65 members, some of whom have passed away, all made or are still making significant contributions to Meals on Wheels.

SALISBURY — All the important people were there, and Stacy E. Walser couldn’t have asked for a much nicer backdrop... read more