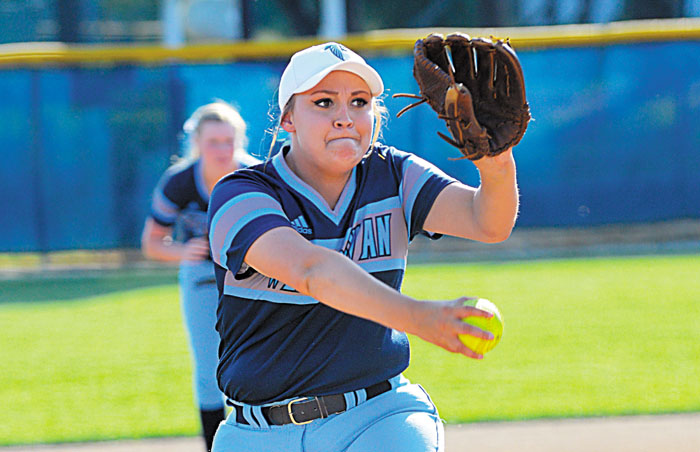 Wayne Hinshaw file photo/for the Salisbury Post ... West Rowan’s Hannah Roberts, shown pitching in a 2017 game. Roberts has announced that she will continue her education and softball career at Limestone College in Gaffney, S.C.

MOUNT ULLA — You never know what college recruiters are going to be looking for.

Limestone College’s softball coaches had hustle at the top of their list on a summer day in 2017. That’s when West Rowan’s Hannah Roberts made a favorable first impression.

“They saw her playing third base for her summer travel team, saw her diving all over the place,” West Rowan head coach Jimmy Greene said. “They saw a player who was willing to get dirty, and not everyone plays like that these days. Limestone knew right away Hannah was a player they wanted.”

The feeling was mutual. Roberts also fell in love with Limestone quickly. A lot of time has passed since she first gave a verbal commitment to the Saints and head coach Amy Yates prior to her junior year at West Rowan, but nothing ever swayed her. She recently signed with the Division II school in Gaffney, S.C.

“I had other offers and some were bigger,” Roberts said. “But I knew Limestone was the right place all along. It’s small and I think a small campus and a small school fit me best. When I visited there it actually felt a lot like Rowan County. I knew it was a place where I could feel at home for four years.”

Roberts probably will be a corner infielder for Limestone, although it never hurts to add another pitcher.

Roberts is not one of those girls who jumped into softball head-first at age 3.

“I  tried cheerleading and soccer when I was younger, but when I was 8 or 9, I told my dad I wanted to try softball,” Roberts said. “He said I needed to make sure because it was going to take a strong commitment to be successful. I told him I was ready. I told him I could do it. That’s when I found out was softball was in my blood. It’s been a big part of my life since then.”

A varsity player for the Falcons since her freshman season, she’s been a huge part of three winning West squads, including last season’s North Piedmont Conference co-champs.

Her best statistical high school season was her all-county sophomore year when she batted .400 while winning 11 games in the circle as the Falcons’ No. 1 pitcher. Her stats weren’t as big. but her versatility helped her make the All-North Piedmont Conference team as a junior.

She doesn’t expect to pitch much for West as a senior this spring. The Falcons have two of the county’s best hurlers with Taylor Walton returning and South Rowan star Whitley Arnott transferring to West, but Greene said Roberts will be a leader and will help the Falcons in a lot of different ways. They’ve talked about that a lot.

“I’ll be playing different positions,” Roberts said. “Some of them may shock people.”

Off the field, Roberts is an integral part of West Rowan. She’s active in many clubs. She volunteers with special needs kids, and she loves animals. That love of animals may lead to a future as a veterinarian. She plans to major in biology at Limestone.

“I don’t see myself being a teacher/coach, but maybe I’ll coach a travel team someday,” Roberts said.

Limestone competes in Conference Carolinas in softball and was 34-12 last season and 17-1 in conference play.

“That’s why I’m so thrilled and proud that Hannah signed with Limestone,” Greene said. “She didn’t just sign to play college softball — she signed with a very strong program. Limestone is a machine with a   winning tradition.”