East Rowan-A.L. Brown boys suspended at the half 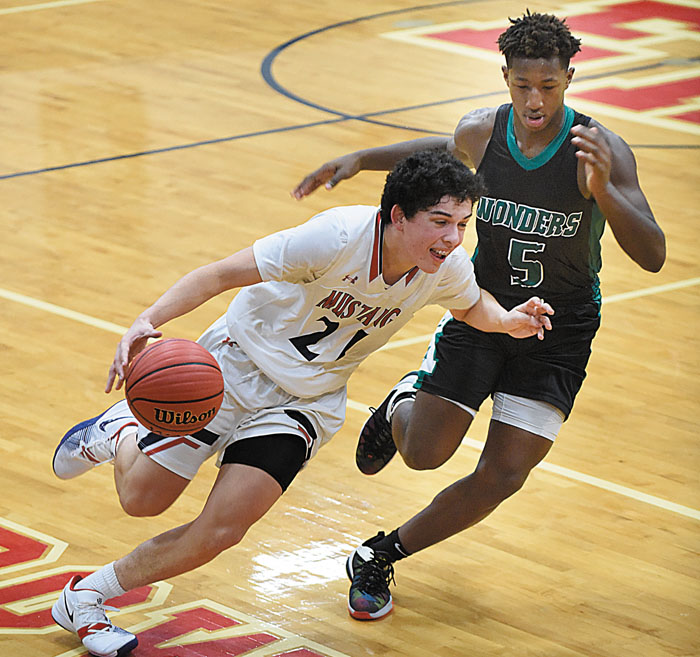 GRANITE QUARRY — After two intense quarters of basketball at East Rowan on Wednesday night, everything came to a screeching halt at intermission.

The Mustangs led visiting A.L. Brown, 26-19, at the half, but a major malfunction of the scoreboard and game clock caused the game to be suspended for the evening.

“I don’t know what else to say other than that was crazy,” East coach Kurt Misenheimer said. “It was twilight zone stuff.  But we hope to finish the game as soon as we can, at least that is the plan, but we also have to get approval by the state to continue.”

The Mustangs have two new digital scoreboards in the gym this season, but the problems initially popped up with the control box during the second quarter. First, the score froze, then the clock would not work. After some quick maintenance, the teams were able to complete the first half. But during the halftime break, the system shut down completely and it was clear it could not be quickly repaired.

Game officials, the two coaches and other athletic personnel conferred and decided the game could not continue without a clock and scoreboard, so a suspension was declared. For now, the score and all statistics are official and the game will resume with the beginning of the second half, once a mutually suitable date can be determined.

East came into the contest at 2-0, while it was the first official outing for the Wonders this season.

The Mustangs came out the gate impressively behind 6-5 junior forward Brandon Jefferson to build a quick 10-4 lead. Jefferson had a steal and score, then another layup and a block to spark the surge. Then Jefferson limped off the floor with an ankle injury late in the first quarter and never returned.

“I just rolled it like I did in football season,” Jefferson said. ” I will ice it down good tonight and see how it feels tomorrow.”

With Jefferson out and point guard Gabe Hinceman in foul trouble, East was suddenly without two of their best ball handlers. The Wonders battled back with a trapping, pressing defense to take a 12-11 right at the end of the first quarter. Forward Amari Haynie stole the ball and scored just before the first quarter buzzer to give Brown the lead.

The Mustangs turned to their other big man, 6-7 Elton Hooper, to pick up the slack in the second quarter as he scored three quick inside buckets and grabbed three rebounds to push East ahead, 17-14.

“For the most part we just stayed in front of them and challenged them with arms in their faces,” Hooper said, of the second-quarter surge. As for the suspension of the game, Hooper said “that was something new and I didn’t like it. You want to finish if you can, but we will just keep playing hard from here on out.”

With Hinceman and Jefferson out, East also got a big shooting and ball-handling boost from sophomore guards David Jordan and Gavin Sprinkle. East led, 17-14, midway in the second quarter when Sprinkle hit a free throw and a layup, while Jordan canned a long 3-pointer for a 23-16 margin.

Brown’s DQ Foggie hit a 3-pointer for the Wonders  with eight seconds left to cut the lead to 23-19. But Jordan had one more big play left before half as he heaved up a 30-footer from the top of the key for a banked 3-pointer and 26-19 East lead.

But that is where it ended, at least for now.

“We had some turnovers, but we played good defense,” Misenheimer said. “We also had some guys step up off the bench to make some plays. All things considered, I was real happy with the way we played.”

Jordan led the Mustang scoring with his trio of three pointers and nine points. Hooper followed with seven points and five rebounds. Hinceman did not score and was hit with his third foul at the beginning of the second quarter. The Wonders were led by Haynie with five points, while Elijah Isom and Amari Green had four each.

While the suspended contest is being resolved, East returns to action this Friday with another non-league game at Central Cabarrus. The Wonders will play its home opener this Friday against Mooresville.

Game suspended at halftime due to scoreboard malfunction. To be resumed in near future.