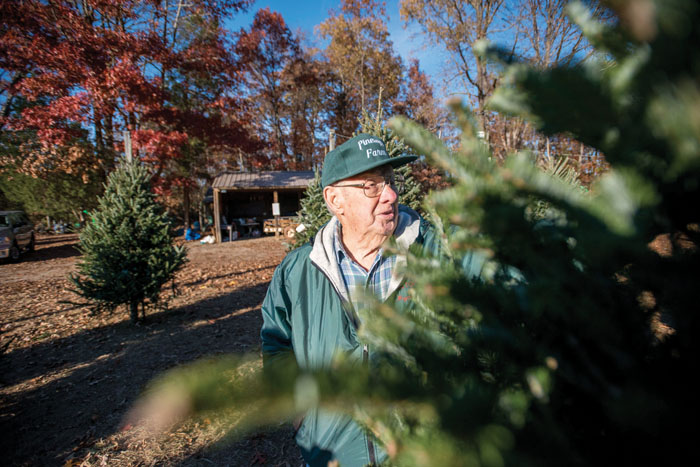 Bryce Kepley, who operates Pinetop Farm on Majolica Road, has been selling Christmas trees since the late 1970s. Kepley stands among his smaller lot of Fraser firs that came from the Sparta area. Jon C. Lakey/Salisbury Post

SALISBURY — With Christmas tree shopping underway, customers may see a shortage of trees toward the end of the season, but tree sellers are not likely to run out.

Amy-Lynn Albertson, director of Rowan County Cooperative Extension, said retailers may not have as many trees as usual but there are plenty in the mountains. She said there has been a drop in sales due to the economy and the popularity of artificial trees, which has caused a slight shortage of live trees.

She said now the demand is back up, but it takes seven years to grow a tree to harvestable size.

Bryce Kepley, the owner of Pinetop Farm on Majolica Road, has a choose-and-cut Christmas tree farm. He has white pine, scotch pine, leyland cypress and blue ice trees. He also offers precut Fraser firs from the mountains, which are widely popular.

Last year, Kepley said he ran out of the Fraser firs but he thinks that’s unlikely to happen again this year. He said some of his white pines are diseased with white pine root rot, and he has had to discard them.

Pinetop Farm opened the weekend of Nov. 17 and will remain open until Dec. 16. He said last weekend and the upcoming weekend are generally the most popular times people come out to the farm to pick out a tree.

When customers arrive, they are treated to a candy cane, take a hay ride to the tree of their choice, chop it down, haul the tree back, measure the tree and put it in plastic netting for transportation.

Kepley planted his first tree in 1971, a Scotch pine.

Albertson recommends a trip to Pinetop Farm, agreeing it makes for a fun time.

Albertson points out the benefits of a real tree, saying buying them supports the North Carolina economy, since the majority of trees are grown in North Carolina. They also bring aroma to a home, she said.

She said trees provide a good habitat for wildlife, saying it is possible to sink it in a pond or put it in the woods where animals can use it as shelter.

She said in the Salisbury city limits, residents can take advantage of a tree recycling program.

For advice ahead of Christmas tree shopping, visit christmastrees.ces.ncsu.edu/christmastrees-selecting-the-right-tree.

Meals on Wheels Rowan hands out honors, looks to…