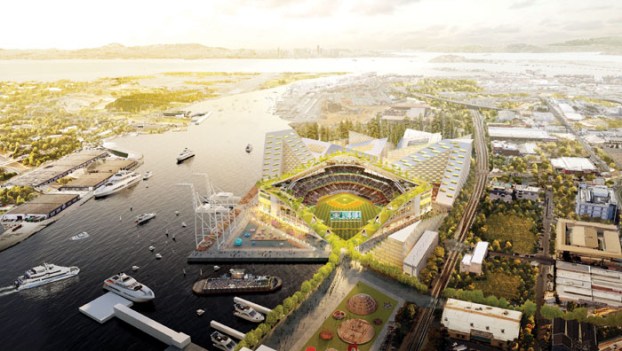 Athletics plan waterfront ballpark to open in Oakland by 2023

OAKLAND, Calif. (AP) — Dave Kaval can look out his office window and immediately envision a new privately funded ballpark he plans to get built, and it now feels like much more of a reality — with renderings and a real plan, not to mention the city’s support.

The Oakland Athletics have found a waterfront location for their ballpark, with picturesque views toward San Francisco, the Bay Bridge and Port of Oakland. Plans were announced Wednesday, with the goal to open in 2023. There is no announced price at this stage, and Kaval didn’t want to even share an estimate. A California Environmental Quality Act assessment will begin immediately.

Kaval, the enthusiastic, high-energy team president who oversaw a successful new stadium for Major League Soccer’s San Jose Earthquakes, had hoped to finalize a site by the end of the year, and he said the team settled on the Howard Terminal site near Jack London Square after meeting with 500 members of the community and nearly 80 organizations. He plans to host an open house Thursday for community members and fans to learn more.

“We did a tremendous amount of community engagement where we listened to people in West Oakland, in East Oakland and I think what we found is this project is bigger than baseball,” Kaval said. “It’s not just a ballpark it’s something that could have a lasting impact in a positive way on our community here in Oakland to ensure the A’s are here for another 50 or 100 years or really basically forever.”

The ballpark site is about 6 miles from the Coliseum and there is no mass transit. The A’s and city said they plan to build a gondola that would go from the waterfront area of ballpark over Interstate 880 to downtown.

The team’s new downtown offices will have a view of the project, including right from Kaval’s large corner window.

The club, coming off its first playoff berth since 2014, had to switch gears after a proposed plan at Laney College fell through last December . The board of the Peralta Community College District said it had directed the chancellor to discontinue talks about a possible ballpark near Laney College, one of three original sites considered including Howard Terminal.

In addition, the A’s intend to redevelop the site around the aging, rundown Oakland Coliseum they have long shared with the NFL’S Oakland Raiders, who plan their own move to Las Vegas. The Golden State Warriors will begin playing in San Francisco at new Chase Center next year.

A project at the current Coliseum site would begin after the A’s are in their new ballpark, Kaval said, with a hope of making significant progress by 2024.

The first step in the A’s acquiring the Coliseum land — either a purchase or lease agreement — will be the City of Oakland buying it from Alameda County, Mayor Libby Schaaf said.

“This is a really gorgeous starting line,” Schaaf said of finding the right spot at last.

While the baseball operations side can begin to foresee the benefits such as a higher payroll and ability to attract top free agents, that is still years away.

“It’s great, and the renderings make it seem real and also hearing Dave every single day on the phone working at it, it seems very real,” general manager David Forst said. “It doesn’t mean a whole lot for baseball until it’s there but we can certainly start looking at it in terms of baseball planning. … I’ve been here a long time. We’ve talked about a lot of iterations of ballparks and places and this is the place we want to be.”

Kaval called the A’s will build a “bold, iconic ballpark” and the “design will allow us to blur the boundaries of a traditional ballpark and integrate into the surrounding neighborhood.”

“We are excited about the A’s plans at Howard Terminal, not just for the club but for their fans, who deserve a first-class venue to support one of the most competitive franchises in Major League Baseball,” Commissioner Rob Manfred said. “The organization has been consistent in their desire to thrive in the city of Oakland and we are glad that those plans are moving forward toward the opening of a new ballpark in 2023.”

The Rays are the other team working on a ballpark plan. Tampa Bay has until Dec. 31 under its agreement with St. Petersburg to explore sites throughout the area.

Oakland’s project includes a 120-day action plan with five steps: expanded community and stakeholder engagement, an environmental impact report for Howard Terminal, an agreement with the Port of Oakland, the framework for the Coliseum redevelopment with the city and county and an economic and community benefits package.

“We have two projects that we’re proposing,” Kaval said. “They’re both important for the city and they allow us to really honor East Oakland and that part of the city.”

CHARLOTTE (AP) — Eric Reid says he’s being targeted by the NFL because of his pending collusion case after being... read more