Oklahoma ahead of Ohio State in pivotal playoff rankings 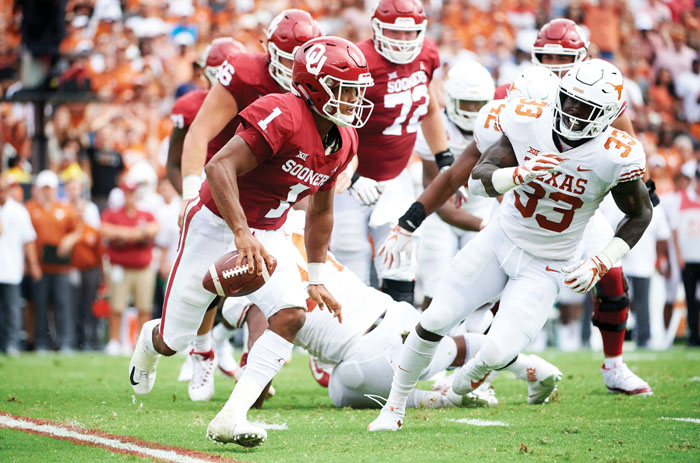 FILE - In this Oct. 6, 2018, file photo, Oklahoma quarterback Kyler Murray (1) scrambles against Texas during the first half of an NCAA college football game at the Cotton Bowl in Dallas. The Sooners face Texas in the Big 12 championship game on Saturday. (AP Photo/Cooper Neill, FIle)

Oklahoma is on the doorstep of the College Football Playoff.

The Sooners were No. 5 in the pivotal second-to-last College Football Playoff rankings released Tuesday night, ahead of Ohio State heading into championship weekend when the final four will be set.

The biggest question facing the selection committee this week was how much to value Ohio State’s 62-39 blowout of Michigan on Saturday. The answer: The Buckeyes moved up four spots but were still stuck behind the Sooners.

“I really don’t have a measurement for closeness,” selection committee chairman Rob Mullens said when asked what separated Ohio State and Oklahoma.

Mullens cited Oklahoma’s historic offense. The Sooners are on pace to set an FBS record for yards per play, averaging 8.92.

The top three teams in the selection committee’s rankings held steady for a fourth straight week. Alabama, Clemson and Notre Dame — all unbeaten — are Nos. 1, 2 and 3. Georgia moved into the fourth spot that was previously occupied by Michigan, heading into its SEC championship game against Alabama. It’s a given the SEC winner makes the playoff. Maybe the loser, too.

Notre Dame is already in the clubhouse at 12-0 and Clemson faces Pittsburgh in the Atlantic Coast Conference championship game. That leaves one spot very much in play.

Ohio State faces Northwestern (8-4) in the Big Ten championship in Indianapolis and Oklahoma rematches Texas (9-3) in the Big 12 title game in Arlington, Texas. The Longhorns handed the Sooners their only regular-season loss in October. Ohio State’s lone loss was by 29 points at Purdue.

Can the Buckeyes vault past the Sooners if both win Saturday?

There is some precedent. In 2014, Ohio State beat Wisconsin 59-0 in the Big Ten championship game and jumped from sixth to fourth, passing co-Big 12 champions Baylor and TCU. The Buckeyes might need a similar performance to have a shot this time.

What else could make for mystery heading into selection Sunday?

The defense-smitten committee could be presented with an alternative option for the fourth spot depending on how things go in the SEC championship game. It will drive fans outside of SEC country out of their minds, but Alabama seems like a lock to make the playoff even if it loses — barring some kind of epic beatdown of the Tide by the Bulldogs in Atlanta. Note: Alabama has never lost a game by more than 14 points under Nick Saban.

What could make SEC haters even angrier? Alabama beats Georgia 31-28 on a last-play field goal and the committee is so impressed with the Bulldogs they just throw them in there at No. 4, despite the two losses and lack of a conference championship.

That seems extreme considering the committee has yet to include a two-loss team in the playoff, bypassing ones with conference championships for one-loss teams without. But if Ohio State and/or Oklahoma are unimpressive winners on Saturday — or they both lose — the CFP could have two SEC teams in it for the second straight season. And, just to make even more people angry, Notre Dame’s inclusion would mean three of the Power Five conference would not be represented.

IS CLEMSON IN ALREADY?

Looks good for the Tigers. Don’t bet on Clemson losing to Pitt (7-5) in the Atlantic Coast Conference championship game this weekend — seriously, do not do that. If it were to happen, though, would it really be worse than losing to Purdue the way Ohio State did? And could the committee really pass over Clemson’s balance on both sides of the ball — fourth in offensive yards per play and third in defensive yards per play — for the lopsided Sooners?

Not having that conference championship could get tricky, and Ohio State and Oklahoma fans would cry strength of schedule because of a down year in the ACC, but having played Texas A&M and South Carolina outside the conference means the numbers look OK there for the Tigers, too.

TOUGH LOSS FOR THE COUGARS

After Washington State lost to Washington last Friday to hand the Huskies a spot in the Pac-12 championship game, the assumption was Wazzu was still in fine shape for a big game. Maybe the Fiesta Bowl.

Upon further, review probably not.

The Cougars (10-2) were ranked 13th, behind ninth-ranked Florida, 10th-ranked LSU, 11th-ranked Washington and 12th-ranked Penn State, all with three losses. Wazzu will likely settle for the Alamo Bowl and the Pac-12 will get just one team in the New Year’s Six .

If all the favorites win and the committee doesn’t become infatuated with Georgia, the New Year’s Six bowls will likely look like this:

(Note: Alabama is close to Arlington, Texas, but Oklahoma is even closer. CFP protocol directs the committee to give the No. 1 seed as much of a home-field advantage as possible. Would that be served if the No. 4 is playing closest to home?)

GEORGIA GETS THE GAME IT WANTED ALL ALONG: A ‘BAMA REMATCH

ATHENS, Ga. (AP) — As soon as Tua Tagovailoa let go of the pass, the one that ended the national championship game in the blink of an eye, Georgia has wanted another shot at Alabama.

Oh sure, the Bulldogs tried to play it cool. They insisted that it didn’t do any good to dwell on such a bitter disappointment. Learn from it and move on.

Even after both teams clinched their spots in the Southeastern Conference championship game with a month to spare, Georgia’s players wouldn’t get drawn into any discussion about the Crimson Tide.

Well, now they can talk about it.

The rematch is here.

“I didn’t come back this year to not be here,” said senior defensive end Jonathan Ledbetter, who passed on a chance to enter the NFL draft. “We had unfinished business. We intend to go ahead and handle that.”

In what amounts to a play-in game for a spot in the College Football Playoff, No. 4 Georgia (11-1) gets another shot at top-ranked Alabama (12-0) in Saturday’s SEC championship game at Mercedes-Benz Stadium in Atlanta — the very same place where the Tide won its national title last January, overcoming a 13-point deficit to beat the Bulldogs 26-23 in overtime .

A do-over has seemingly been in the cards ever since that dramatic night.

With Nick Saban guiding Alabama and protege Kirby Smart running things at Georgia, these talent-rich programs were heavily favored to win their respective divisions and largely lived up to expectations.

In fact, the Crimson Tide could go down as one of the greatest teams in college football history by winning out. No one has come close to beating ‘Bama, its average margin of victory a staggering 35 points a game.

Tagovailoa is heavily favored to claim the Heisman Trophy, guiding what can only be viewed as a nightmare scenario for Saban’s opponents: a team that has always been among the best in the nation defensively running up and down the field with a fun-and-gun offense. Alabama is averaging 49 points a game, twice dropping more than 60 and putting up at least 50 six other times.

“They’ve got a great team. I don’t think anybody would argue that,” Smart said. “They’ve got very few deficiencies in any area, a talented quarterback, explosive offense, and the first thing you notice when they turn the tape on is how fast and how much they score. They play some good teams in our conference, and they still score a lot of points.”

Georgia slipped up once, losing 36-16 at LSU in mid-October, but romped past everyone else. The Bulldogs have scored at least 40 points in seven games, with an average margin of nearly 27 points in those 11 victories.

“They’ve got an extremely talented team. We respect that,” Smart said. “But we also have a good football team. Our kids take a lot of pride in their performance.”

The Bulldogs certainly gave Alabama all it could handle in the last meeting.

Georgia dominated the first half, going to the locker room with a 13-0 lead that prompted Saban to make a decision that would go down as one of the best in his long, celebrated career. The coach benched Jalen Hurts, the quarterback who led the Tide to a pair of national championship games, and brought in Tagovailoa, a touted freshman whose college experience to that point was limited largely to mop-up roles.

The left-handed Hawaiian threw three touchdown passes, including a 41-yarder to Devonta Smith that ended the game after Georgia started overtime with a field goal. Making that play even more galling for the Bulldogs, they sacked Tagovailoa on Alabama’s first offensive play to leave the Tide in a second-and-26 hole. Then, a busted coverage allowed Smith to break free behind the secondary . The touchdown looked downright easy.

“That game came down to more than just that,” Smart insisted. “I mean, that’s just what people remember the most. When we teach that coverage, we teach it the same way we taught it before. We just hope that we do a better job of executing it.”

Saban knew if his team reached the SEC championship game — remember, the Tide missed out a year ago after losing to Auburn in its regular-season finale — there was a very good chance that Georgia would be the opponent. The Bulldogs are actually the reigning conference champions, but Alabama has the title that really matters.

“They have been a pretty dominant team all season long,” Saban said. “I really thought that, in playing Georgia last year and knowing the kind of players they had coming back and the job they do there and the job that Kirby does with his entire staff, that they would have an excellent chance to come back to this game.”

Alabama remains the team everyone is chasing.

Saban has set an almost impossibly high template during his dozen seasons in Tuscaloosa, claiming five national titles and becoming the only team to earn a spot in the College Football Playoff during each of its first four seasons.

“Everybody in this business is striving for greatness,” Georgia quarterback Jake Fromm said. “They’re a great example. Everybody is kind of striving for that.”