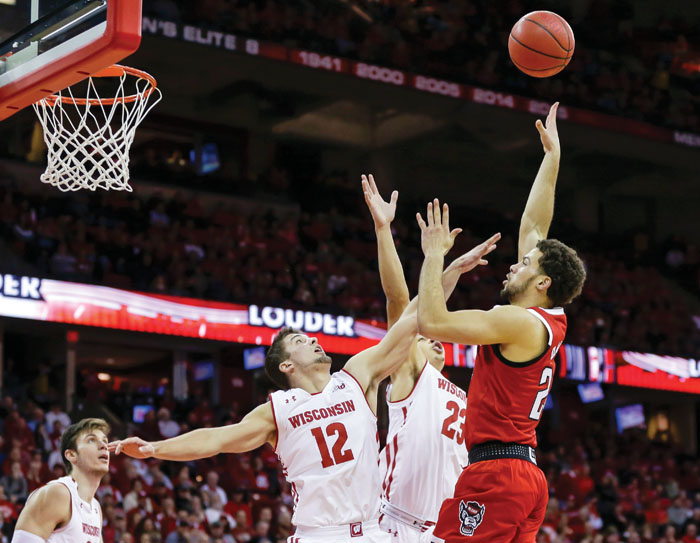 Wisconsin’s Brad Davison drew a charging call on Markell Johnson on the perimeter with 16 seconds left. The emotional Davison let out a furious yell and pumped his arms after forcing a critical turnover with the Wolfpack trailing by three.

Davison hit two foul shots with 8 seconds left for a four-point lead for Wisconsin (6-1), and a last-gasp 3-point try for the Wolfpack sailed harmlessly off the backboard at the other end.

The Wolfpack controlled tempo for much of the game and answered nearly every run after Wisconsin fell behind 41-29 early in the second half.

The Badgers finally broke through in the end, with Happ leading the way in the paint.

They got boosts from the 3-point line from Trice, who had 18 points and went 4 of 5 from behind the arc; and Aleem Ford who had 12 points on four 3s.

N.C. State: The game had a choppy flow in the first half before opening up in the second. In between the whistles, the Wolfpack mostly dictated the pace with its man-to-man defense and occasional full-court pressures. Coach Kevin Keatts’ team had feasted on lower-division opponents in getting off to a 6-0 start, though a close loss to the Badgers on the road proved that the Wolfpack were on the right track. They forced 14 Wisconsin turnovers, seven in the first half, against a team that was averaging nine a game.

Wisconsin: Happ had some decent looks in traffic around the bucket but was just 3 of 11 from the field in the first half. The preseason All-American also found open shooters on the perimeter when he got doubled, but Brevin Pritzl and Ford missed a couple opportunities. Shooting improved in the second half, when the Badgers were 62 percent overall and 54 percent (6 of 11) from 3-point territory.

Wisconsin: Travels to No. 14 Iowa for Big Ten opener on Friday.

LOUISVILLE, Ky. (AP) — No matter what line he shot from behind against No. 9 Michigan State, Louisville junior guard Ryan McMahon was feeling it.

The Cardinals fed off his energy to not only give first-year coach Chris Mack a significant win, but a gutsy one at that.

McMahon made two free throws with 7.1 seconds remaining in overtime before Jordan Nwora made another from the line with 3.1 seconds left to seal it as Louisville upset the Spartans 82-78 on Tuesday night in the ACC/Big Ten Challenge.

McMahon scored all seven of his points in the extra session from the foul line to finish with a career-high 24. Highlighting that total was 12-of-13 free throw shooting and four 3-pointers to top his previous best of 15 points last tied in January against Pittsburgh. He missed his one 2-point attempt, but that was forgotten as he converted frequent opportunities at the line.

Nwora’s clinching free throw followed his 3-pointer with 2:05 left that gave the Cardinals (4-2) the lead for good.

in an exciting matchup that ended a two-game slide and followed a 77-74 loss to Marquette in OT on Friday in Brooklyn, New York.

This one didn’t slip away.

“We didn’t let those negative thoughts creep in our mind,” Mack said. “I’m sure they were there and we were tough enough and showed the fortitude to get the job done against a really good team.”

Louisville needed just about every point to hold off the Spartans (5-2), who had a chance to get close with Joshua Langford (15 points) at the line. But he missed the first of two free throws with 4.2 seconds left and failed to hit the rim on an intentional miss, a violation that gave Louisville the ball and led to Nwora’s free throw.

“It was a game of inches,” said Michigan State coach Tom Izzo, whose team committed 17 turnovers leading to 18 Louisville points. “We just did some things that weren’t good enough to win. It’s a game of inches and we didn’t value the inches. Give them credit, they hit some shots and made some plays. We just made some uncharacteristic ridiculous plays.”

Dwayne Sutton and Christen Cunningham each had 13 points for the Cardinals, who won despite shooting 40 percent and getting outrebounded 47-30.

Kyle Ahrens had 15 points for Michigan State while starting in place of injured senior guard Matt McQuaid, who did not travel for the game because of a thigh bruise. Nick Ward had 14 points and Cassius Winston 13, while Kenny Goins grabbed a career-high 17 rebounds.

Izzo said McQuaid would be evaluated daily after hurting his thigh late in the win over Texas. He said it began swelling on the plane ride back from the Las Vegas Invitational and just needs to subside.

Michigan State could fall out of the Top 10 after losing to an unranked team.

Michigan State: The Spartans fought hard despite missing shots and committing turnovers in the first half. Langford provided a big lift down the stretch in regulation and overtime but missed a free throw that could have given the Spartans a chance.

Louisville: The Cardinals led much of the game before wobbling down the stretch. But they regrouped in OT, dictated the pace and made free throws, most importantly.