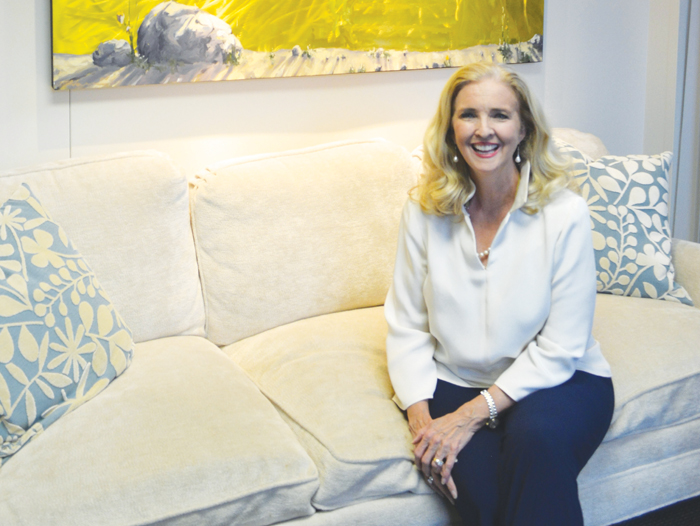 GREENSBORO — About six years ago, Janet Ward Black, president of Ward Black Law, had an interesting conversation with her office manager.

Black wanted to give 10 percent of the law firm’s money away.

But they worked it out, and then an interesting thing happened. That first year, the firm had more profit that it ever had. It distributed the largest employee bonuses ever, and the firm’s offices underwent a major renovation.

Every month since, the five members of the Tithe Team sit down to decide how to disburse the money. To date, they’ve worked with some 180 nonprofit organizations on a local, state, national and international level.

The money the firm gives typically serves as matching funds.

“I ask you to tell me any place you can double your money,” Black says. “We have seen nonprofits successfully get money because donors know about the matching funds. We’re at least doubling what we can do each year from every dime on a dollar.”

In the past six years, Ward Black Law has made donations in excess of seven figures, Black said.

Black has found anonymous giving satisfying, more so than if her firm’s name were attached to the donation, she says.

The gifts are not allocated through an application process. Nonprofit organizations are invited to meet with the firm to share more about what they do.

“We smile a lot when we watch the news or read the newspaper,” Black said. “We have a hand in so many good works. It’s fun.”

Because Black wouldn’t classify personal injury law as “fun,” she says of the donations, “It gives you a different reason to work.”

You’re finding out who is addressing a need, and you’re helping that organization, she said.

“My call is to practice law and run this firm. I’m more effective earning a dime on every dollar. That’s the most efficient use of the brain God gave me, to invest in the work of others. We see miracles all the time, and it is breathtaking.”

For its areas of giving, the Tithe Team uses as its guide the words of Jesus from Matthew 25: Feed the hungry, give the thirsty something to drink, welcome the stranger, clothe the naked, take care of those who are sick, visit those who are in prison.

“We had to be intentional,” Black said. “We wanted to be brave enough so that people will know our faith.”

Wendy Campbell has been Black’s office manager for 23 years. The two shared a warm hug when Black popped into her office. The first year Campbell wrote all the checks for the Tithe Team, she knew she wanted to be involved.

Daniel Dutilly agreed. The firm’s director of marketing and client relations now knows so much or more about the nonprofit community, he said.

Black turns 60 in February, and her resume is lengthy. A graduate of Davidson College and Duke Law School, she was Miss North Carolina 1980. She was an assistant district attorney for Rowan and Cabarrus counties before joining Wallace Whitley Pope & Black firm in 1989.

In 1992, she moved to Greensboro to join Donaldson & Black, and she purchased the firm in 2006. It is one of the state’s largest woman-owned law firms, she said. Since 1995, she has been married to Gerard Davidson, one of eight attorneys at Ward Black Law.

Anna Mills Wagoner first met Black in Salisbury in 1985, when not that many women were practicing law. They struck up a friendship and also bonded over their double first names. “We’ve been at it ever since,” Wagoner said.

Wagoner is now senior resident Superior Court judge for Rowan County, but she travels throughout the 11-county district and beyond, when needed. When she was a U.S. attorney in Greensboro, she and Black often got together. Now, they text or email once a week.

Early on, the women decided to be part of a Habitat for Humanity house in Salisbury built solely by women. That’s just one example of how Black gives, Wagoner said. Through International Cooperating Ministries, she supports mission churches throughout the world, one of which was in memory of Wagoner’s mother.

“She’s grown into her relationship with God,” Wagoner says. “I feel firmly that she feels this is a way of giving back. She is one of the most caring, generous, thoughtful, and sincere people I’ve ever known — and that’s a gift to me.”

Her list of accomplishments is pages long, but because of her efforts with the Tithe Team, she was recently named Greensboro’s Woman of the Year by the Women to Women fund, a subsidiary of the Community Foundation of Greensboro.

“Basically, just because she’s amazing,” Mondello said of the nomination. “I’m just inspired by her willingness to be obedient to the Lord when he called her to tithe for business. She realizes how hard it is for Christian nonprofits to get funding. She has a great passion about Christian businesses giving back to Christian ministries. Our office is not very far from there. One of her employees is on our board, and her firm hosts board meetings and other events for us. Her desire is to help and serve. She’s also a big connector of people.”

“You could just feel the presence of the Lord in that meeting,” she said. “Janet Ward said, ‘We’re going to write you a check.’”

The two had not discussed it, but the amount turned out to be exactly what Mondello had forecast her organization would need in the fourth quarter.

“She’s one of a kind,” Mondello said.

Bonnie Harris, founder and director of Hannah’s Haven, agreed. Black’s firm not only donates to the organization but the women it serves go to the law firm for a weekly Bible study.

“They just welcome us in and don’t look at our backgrounds,” Harris said. “We all meet together. We have lawyers who are willing to walk with us during our spiritual life. God has put people in our path who don’t forget about us. Janet Ward Black doesn’t forget people who need a hand up. We want her to know how grateful we are for her.”