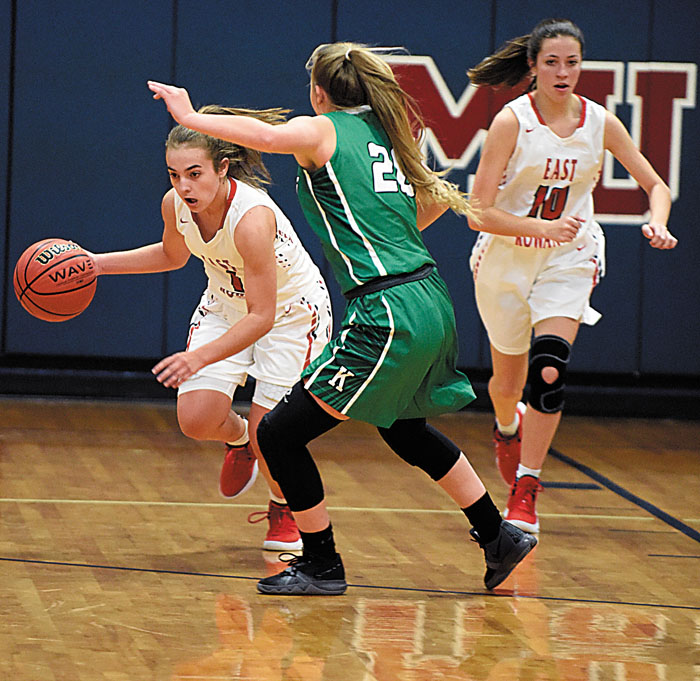 GRANITE QUARRY — Half of A.L. Brown’s four girls basketball wins in 2017-18 were romps over East Rowan.

But the Mustangs appear headed for a turnaround season under third-year coach Kevin Holland. East blew out the Wonders, 60-33, on Wednesday.

East had the game under control at halftime with a 19-point lead and registered its first victory over the Wonders since the 2012-13 season.

Both teams started slowly, but East was starting to click by the end of the first quarter. Junior guard Adalie Harrison ended that quarter with a layup for a 16-9 lead.

The Mustangs held the visitors to four points in the second quarter.

“We’re playing some pretty solid defense,” Holland said. “They got a few easy baskets against our press, but when we backed up in the half court we played good defense. We mixed it up defensively, tried to show them some different looks.”

Caroline Houpe hit a 3-pointer for a double-digit lead. East got a steal-and-layup combo from Harrison and a jumper from Brooke Mitchell as it stretched the lead to 30-13 at halftime.

Harrison is East’s leading returning scorer, but she had scored been held to 11 points combined in East’s first two games. She got loose for 12 against the Wonders.

“She got some breakaways and she got some points off her defense,” Holland said.

East stretched its lead to 50-19 after three quarters.

Grace Eagle made two 3-pointers and scored in double figures for the third straight game. She had a game-high 14 points. Zee Winford had her best game of the season with nine points. Madie Honeycutt scored eight, Houpe had seven, while Mary Spry had six. Honeycutt, a guard, and Spry, a post player, are making an impact as freshmen.

“We don’t have a superstar, but we’ve got five or six girls who are capable of getting 12 to 14 points on a given night,” Holland said. “As long as we’re getting that balanced scoring, we can win a lot.”

Kaylee Yow, a 5-10 freshman, led the Wonders with eight points.

Doug Wilson is coaching the Wonders. He’s back after a long hiatus. He enjoyed some success leading the program from 1999-2006, including a conference tournament championship in 2001.

East has a challenging road game on Friday at Central Cabarrus. Central had Carson down at halftime on Tuesday, but couldn’t sustain momentum in the second half.