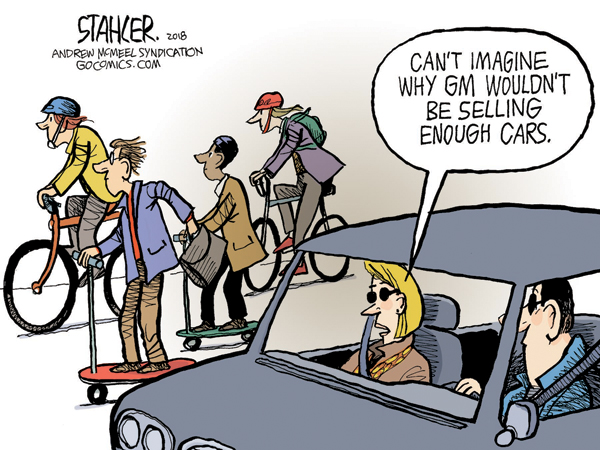 Watching Donald Trump carry on about General Motors’s announcement that it’s closing plants and firing almost 15,000 workers is like walking into a movie theater and seeing a Western in which you have no one to root for.

On one side, there’s a rich, high-paid gang led by a woman with a major blindspot. On the other hand, there’s a blustering, bullying bad guy.

The woman, of course, is GM chief executive Mary Barra, with the rest of her gang consisting of GM’s non-employee board members. The bully is, of course, Trump.

People all over the political spectrum have been dumping on Barra. However, as someone who’s written about business forever, lived in suburban Detroit for most of the 1970s and has criticized corporate layoffs for decades, I think that Barra had little or no choice.

The plants GM says that it’s closing make vehicles that aren’t selling well, and whose production level has been declining.

Unless you think that Barra is running a public charity, she needed to do something before losses mounted at these plants and GM, which filed for bankruptcy during the financial crisis after years of having financial problems fester, had to go Chapter 11 again.

I say this not as some corporate apologist, but as the author of a 1996 Newsweek cover story called “Corporate Killers” about how U.S. companies were laying off people en masse and watching their stock prices rise — as GM’s stock did after Barra’s announcement.

But even in that hyper-critical article, I noted that there are times that companies have no choice – they either lay off people, close facilities and adapt, or else they risk going out of business. I think that’s the situation that Barra found herself in.

What she and her fellow board members of GM could – and should – have done is what my Newsweek editors and I suggested in 1996: shared sacrifice.

Barra made a total of more than $70 million in salary, stock awards, option awards and “nonequity incentive plan compensation” in the three years ended in 2017, according to GM filings. The filings say that the 10 outside directors GM had last year (it now has 12) earned a total of $3.2 million in cash and stock awards in 2017 alone. (GM hasn’t disclosed 2018 compensation for Barra or its directors.)

Barra could have offered, say, $7 million of her own money to a fund to help GM workers who will lose their jobs, and the board members could have kicked in half of what they got last year and some of what they knocked down in previous years. Barra and the board could have also publicly apologized to the affected people, the way Japanese corporate leaders have been known to do.

This would have changed the narrative substantially. Barra and the directors would be offering, in a tangible way, to share some of the pain that they’re inflicting. Without endangering their own financial situations.

From a purely political point of view, it’s a lot harder to criticize people who are showing tangible signs of remorse than it is to attack people who seem clueless. (GM declined to comment on my thesis.)

As for Trump — it’s hard to know where to begin.

Trump’s idea that the Federal Reserve raising short-term interest rates (which, as I’ve written, I think it absolutely has to do) is causing the GM firings makes no sense. After all, high-priced, highly profitable GM vehicles like SUVs, crossovers and pickup trucks are selling well. If interest rates were really at the root of GM’s problems, you’d expect to see higher-priced vehicles selling worse than the generally lower-priced vehicles being made by the plants that GM is closing.

In addition, I find it inconsistent — I’m trying to be reasonably polite — that Trump talks so much about the auto people who are going to lose their jobs, but you don’t hear him talking constantly about the thousands of Toys R Us workers who lost their jobs when the debt-burdened, Wall Street-run company filed for bankruptcy earlier this year and closed its stores. And you don’t see him threatening Toys R Us’ owners the way he’s threatening GM.

We also don’t hear him talking constantly about Sears and Kmart workers who have lost their jobs or are going to lose them as the result of the Sears bankruptcy filing and store closings.

Trump seems to care only about jobs being lost when employers in the industrial Midwest close plants, as well as job losses in the coal belt. Is that because votes from people in those places, whom he continually told what they wanted to hear about how he’d save their jobs, tipped the 2016 election his way? You can decide that for yourself.

I don’t think Trump is going to change – why should he, given that his behavior has made him president? But with luck, Corporate America will get a little smarter. And we’ll see a whole different movie when the next big batch of layoffs rolls around.