Brown eager to ‘fix things’ in taking over the Tar Heels 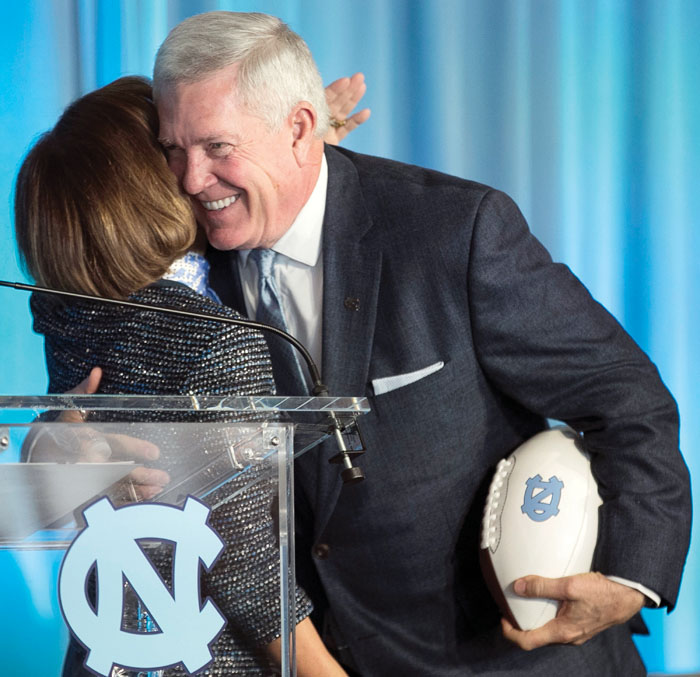 Mack Brown, right, is embraces University of North Carolina Chancellor Carol Folt as he is introduced as the school's new NCAA college football coach during a news conference, Tuesday, Nov. 27, 2018, at Kenan Stadium in Chapel Hill, N.C. Brown spent 10 seasons at UNC from 1988-97 before leaving for Texas. He left there in 2013 and has been in broadcasting in the years since. (Robert Willett/The News & Observer via AP)

CHAPEL HILL (AP) — Mack Brown knows there are many problems to solve as he returns to North Carolina, from stopping the Tar Heels’ deepening downturn on the field to improving shaky recruiting and hiring a coaching staff.

“It gives us an opportunity to fix things,” Brown said during a Tuesday news conference. “And we love to fix things.”

The school officially announced Tuesday that it had hired Brown, who led the Tar Heels to a strong 1990s run before winning a national championship at Texas. He reached a five-year deal that will pay him $3.5 million annually to replace Larry Fedora, who was fired Sunday after seven seasons.

Brown, 67, had his familiar affable demeanor Tuesday in his return to the program he coached from 1988-97, rattling off a long to-do list that included meeting with his new players after the news conference.

Brown’s last two UNC teams finished in the top 10 nationally, then he spent 16 years with the Longhorns before his 2013 exit as the program stumbled a bit from a dominating run through the 2000s. He has worked in broadcasting in recent years, though he said that time has helped by allowing him to learn from coaches as a member of the media even as he mulled opportunities to get back on the field.

Yet he also said he wanted to hold out for a fit that would “feel right,” noting his wife, Sally, said she would be OK with moving to Hawaii, the Bahamas or returning to Chapel Hill after a successful first run.

There was no hesitation, he said, about coming back, saying: “I’m so excited about starting over with young people I don’t know.

“The team has a void, they lost their coach,” Brown said. “They had some very difficult games this year. Well, Sally and I have a void because we haven’t had a team for a number of years now.”

Bringing back Brown offers a connection to one of the more successful stretches in Chapel Hill, where things haven’t been easy for the better part of a decade.

There was an NCAA investigation in 2010 into the football program for improper benefits and academic misconduct under former coach Butch Davis, which ultimately led to Fedora’s arrival from Southern Mississippi before the 2012 season.

Fedora inherited scholarship reductions and a one-year postseason ban, which kept the Tar Heels out of the ACC championship game in his debut season in 2012.

The ruling was supposed to conclude the NCAA issues, though the case spawned an offshoot probe into a more serious concern: nearly two decades of irregular courses in an academic department popular with athletes across numerous sports. That case lingered another five years, and even led to five top-level NCAA charges, before reaching a no-penalty conclusion in October 2017.

Still, Fedora and the Tar Heels managed to have their most successful season since Brown’s first departure, winning 11 games and an ACC division title in 2015. But they have lost 21 of 27 games since November 2016, including 16 of 18 in the league.

Recruiting has also slid along with fan attendance at Kenan Stadium. The Tar Heels rank 66th nationally and 13th in the 14-team ACC with their commitments for the 2019 recruiting class, according to 247sports. UNC hadn’t ranked worse than 32nd nationally or fifth in the ACC from 2013-18.

Brown made it clear he plans to focus on landing instate prospects, a formula he followed in his first rebuilding job with the Tar Heels that began three decades ago.

Brown certainly got things rolling with Texas, too.

The Longhorns continued regularly landing top-tier national recruiting classes through his tenure, though the number of NFL draft picks slid from 22 from 2006-09 to 16 from 2010-13 — and then none in 2014 after his final season.

Despite the ups and downs, Brown said he’s won at every stop. He sees no reason why this should be any different.

“We know this place,” he said, “and we know you can be successful in football here.”