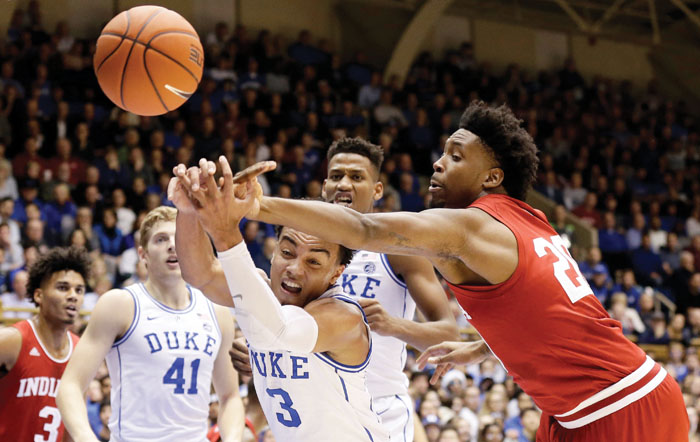 DURHAM. (AP) — Zion Williamson jumped a lazy pass by Indiana near midcourt. All of a sudden, nothing stood between him and yet another must-see dunk.

No. 3 Duke put its lone loss firmly in the past just as easily as Williamson left those Hoosiers in his wake.

No play sent a louder message than the steal by Williamson that ended in a Dominique Wilkins-style windmill jam.

“I tipped it, and when I saw the ball bounce, I knew I was going to get it, so all I did was take a quick look back,” Williamson said. “They stopped running, so I said, you know, let’s give the (Cameron) Crazies a little something to cheer for.”

Tre Jones added 15 points and a fourth Duke freshman — Cameron Reddish — finished with 13 to help the Blue Devils (6-1) bounce back from their lone loss and win one of the made-for-TV event’s glamour matchups.  This one featured a handful of potential NBA lottery picks — the Duke freshmen and Indiana’s Romeo Langford — on the floor at the same time.

Duke looked nothing like the group that lost to Gonzaga last week in the Maui Invitational final . The Blue Devils never trailed, shot 52 percent and turned a season-worst 20 turnovers by Indiana into 24 points.

Langford scored 13 points on 3-of-15 shooting to lead the Hoosiers (5-2). But No. 2 scorer Juwan Morgan, who averages 17.5 points, was in foul trouble all night and finished with eight. Indiana trailed by 24 points at halftime and never got closer than 19 in the second half.

Indiana: Langford and the Hoosiers couldn’t get anything going on offense. Indiana, one of the nation’s best shooting teams at 55 percent, shot a season-worst 39 percent. In the first half, the Hoosiers made just 11 of 33 attempts and turned it over 13 times while falling into a deep hole that few visitors to Cameron Indoor Stadium ever escape.

“I think we let the crowd get to us,” Morgan said. “In this type of atmosphere, you can’t stack bad plays. I think when you have a bad play, you have to stop right there, put a period on that sentence right there and keep moving forward.”

Duke: Williamson and Barrett — the nation’s only freshman teammates averaging at least 20 points apiece — took command again on offense. But what really made this a complete victory for the Blue Devils was how dominant their defense was, especially after the Gonzaga game. Duke forced a season high in turnovers, and held Indiana to a season low point total.

“Every team’s got one or two guys that are maybe a little better than the others,” coach Mike Krzyzewski said, “and we’ve got to make it harder on them.”

That highlight-reel play by Williamson came when Rob Phinisee threw a lazy pass to Fitzner — who immediately slouched his shoulders as Williamson jumped the pass, perhaps knowing a spectacular dunk was coming. That breakaway windmill sent Cameron into a tizzy and put Duke up 38-22.

Better days are ahead for Langford, even if his first — and likely only — visit to Cameron was one to forget. His 12 missed shots were the most of his brief college career, but it was one sequence at the other end of the floor that encapsulated his night. Barrett put up a shot over him. But instead of getting a body on the Duke freshman, he seemingly stepped aside while Barrett had an unimpeded path to the rebound, and he eventually stuck back his own miss to put the Blue Devils up 29-15.

This could have been even more lopsided had Duke not shot just 59 percent from the free-throw line. . Indiana has never beaten Duke in the challenge, falling to 0-5.

“I knew it was coming. Y’all seen him once before, I’ve seen it a thousand times. … Every single time, unbelievable.” — Reddish, on Williamson’s windmill dunk.

Indiana: Plays host to Northwestern in its Big Ten opener on Saturday.

CHICAGO (AP) — The maroon and gold Final Four banner hanging from the rafters gave Nevada just a little extra motivation. Not that the Wolf Pack really needed it.

Caleb Martin had 21 points, twin brother Cody Martin scored 20 and No. 5 Nevada beat Loyola-Chicago 79-65 on Tuesday night in a rematch of their NCAA Tournament game.

Loyola edged Nevada by one point in the South Regional semifinals last season — the only other meeting between these programs. That victory came during a stunning Final Four run for the Ramblers.

“There was a lot of motivation,” Caleb Martin said. “We thought that it could’ve been us. They had a lot of momentum behind them last year and they played really well and they had guys step up for them even though they were a young group of guys. … We just had to tip our hats and keep it moving.”

Nevada players saw the banner during shootaround, and an image was left showing it on a projector while they got dressed before the game.

Cody Martin was 9 of 14 with seven assists.

“There’s a lot of veterans on that team,” said Loyola’s Marques Townes.

, who hit the decisive 3 in the closing seconds of the NCAA game against Nevada. “They got a couple of transfers and the majority of the starting lineup back. They played like men today. I feel like they out-physicalled us today and we didn’t respond.”

Townes led Loyola (4-3) with a season-high 24 points and nine rebounds, but the Ramblers dropped their second straight game.

Loyola great Jerry Harkness presented a Final Four ring to Sister Jean Dolores Schmidt — the now 99-year-old nun and team chaplain who charmed the nation during last season’s run — prior to the game. But with a raucous crowd packing the arena, Nevada did its best to put this one away in the early going.

Led by the Martins, the Wolf Pack shot 62.5 percent while building their 44-28 halftime lead.

They led 29-9 midway through the first half after a layup by Cody Martin. He also hit a 3 with 5:22 left to make it 38-18 before Loyola cut it to 12 in the closing minutes. The Ramblers’ Clayton Custer missed a 3 that would have made it a nine-point game. Caleb Martin hit a runner and Porter scored on a layup to get it back up to 16 with 14 seconds left in the half.

Nevada: With its strength, length and quickness, Nevada dominated inside and on the perimeter, particularly in the early going. That led to another convincing victory for the Wolf Pack, who have won each game by at least 10 points.

Loyola: Though they have three starters back, the Ramblers are already halfway to last season’s loss total.

Loyola coach Porter Moser said guard Lucas Williamson had a swollen hand X-rayed. A sophomore who came in averaging 10.3 points per game, he missed all four shots and did not score.

“For all of us, it stung last year but we were rooting for Loyola after they beat us and wanted them to win the whole thing.” — Nevada coach Eric Musselman.

“I think it’s about getting better. I keep thinking about Coach Majerus. There were so many games where Coach Majerus talked about how you want to move your team along to get to where you need your team to be in January and February. Coach didn’t put so much into these early games. … We just saw where we want to go.” — Moser, an assistant on Rick Majerus’ staff at Saint Louis before taking the Loyola job in 2011.

Oklahoma ahead of Ohio State in pivotal playoff rankings