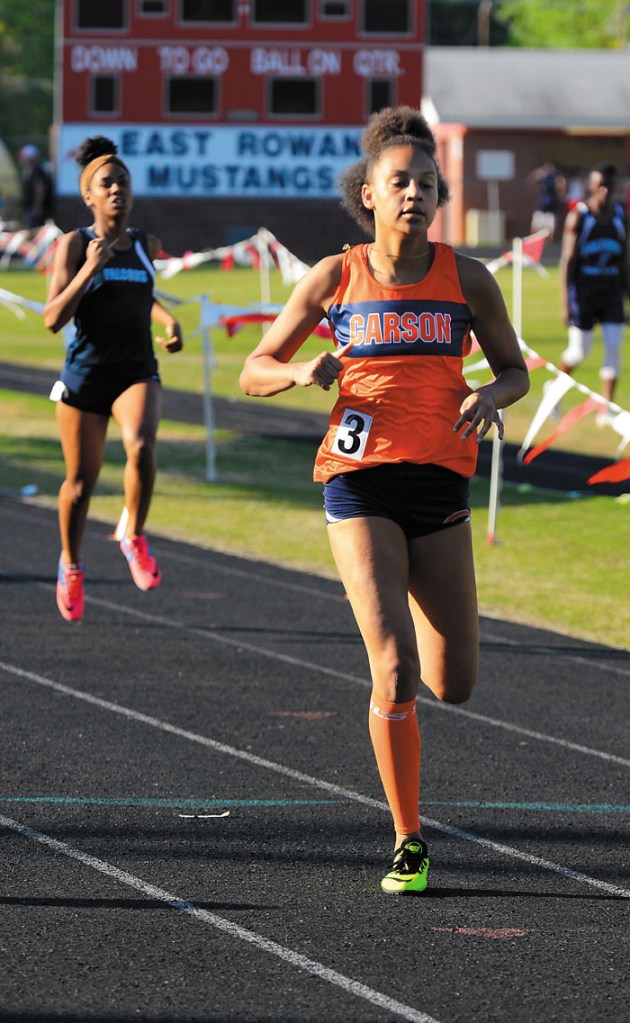 CHINA GROVE — The 400 meters looks like an uncomplicated race from the bleachers — just an all-out sprint, once around the track.

Carson senior Mikaila Gadson has learned the intricacies and challenges of the grueling 400. She’s mastered exploding at the start and then flying around the track at close to maximum speed while still conserving the energy required for a furious finish.

She’s become proficient enough in the 400 that she’ll be competing at the Division I level next year. Gadson signed with the UNC Wilmington Seahawks on Monday.

Ordinarily, there’s not a pile of scholarship money available for track and field athletes, but Gadson combines sprinting ability with academic excellence, so she’ll have a combined full ride.

“It’s kind of crazy to think about signing with a Division I school, crazy when I think back to where I was at this time a year ago,” Gadson said. “But it’s all really exciting. I’m sure I’ll compete in the 400 and the 4×400, and I’ll be ready to help in the relays where I’m needed.”

She’ll have a chance to become the best female 400 runner in UNC Wilmington history. The program’s indoor record is 56.89, while the outdoor record is 55.51. Gadson ran a stunning 56.72 last spring at East Rowan in the county meet and proved it was no fluke with a 57.22 in the 3A state championships. She expects to be quicker this season.

“I haven’t competed in a race since last spring,” Gadson said. “I’ve been in the gym, building muscle mass and getting stronger. More muscle is going to make me faster.”

Gadson is a twin.

McKenzie, her sister, may be better known because more people follow girls basketball than girls track and field, but the Gadson girls have similar 5-foot-8 frames and are equally explosive.

McKenzie, who will lead Carson’s strong basketball team as a senior, signed recently with Anderson University’s basketball program. Both girls realized their mother’s dream of a free education.

“We’ll be going our separate ways in college, but we’ve known for a while that McKenzie would be going for basketball, while I would be focusing on track,” Mikaila said. “It will be definitely be different without her, but I’m sure we’ll still talk a lot. We’ll be OK.”

McKenzie was the Rowan County Female Athlete of the Year as a sophomore.

Mikaila blossomed a little later. Her breakout came as a junior after extensive work with local sprints guru Tim Dunlap.

They don’t run the 400 distance in the indoor state championships, but Mikaila was one of the standouts at Winston-Salem’s JDL Fast Track back in February, placing third in the 300 (41.27) and 500 (1:18.19). There wasn’t a lot of time between those two races, so it was a memorable performance.

In the Rowan County Championships in the outdoor season, Mikaila won the 200 and 400, sprinted on the winning 4×200 relay team and was second in the 100. She was named Sprints MVP and was on her way to being the Post’s female track athlete of the year.

“They started recruiting me then and never stopped,” Gadson said. “I had a chance to go down there and see everything last summer and I went for a visit last month. The coaches were awesome, and so was the team. The location, the school, I just liked everything about it.”

Gadson has recovered from an Achilles sprain and shin splints that sidelined her last summer and is looking forward to competing this winter and spring. She’s set a lofty goal for her future 400s — 54 flat.

That would take some doing, but she’s surprised people before. She made extraordinary jumps last year when she trimmed six seconds off her best sophomore 400 times.

“There was a big change in my confidence level last year,” Gadson said. “I started believing in myself.”

Now that belief is taking her to Division I.

She plans to major in biology. Her dream is to become a veterinarian.