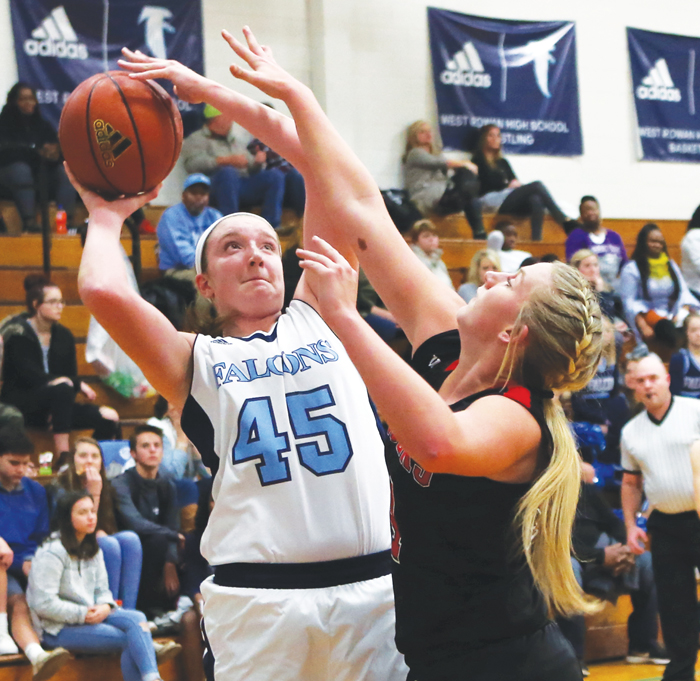 James Sipes file photo/for the Salisbury Post ... West Rowan’s Abigail Wilson (45), shown in a game from last season against South Rowan, scored 30 points on Tuesday night at Davie County, surpassing 1,000 career points, early in her junior year. She is guarded by Whitley Arnott, now a teammate of Wilson’s at West.

MOCKSVILLE — West Rowan junior Abigail Wilson reached a milestone on Tuesday night, but her story may be just getting started.

Wilson reached the milestone in her 57th game. She’s the 13th player in the West program to reach 1,000. Her mother, Salisbury-Rowan Hall of Famer Wendy Hampton Wilson, scored 1,764 points for the Falcons in the 1990s, before heading to Florida State. Wendy Wilson ranks third on West’s career scoring list behind Hillary Hampton (1,814) and record-holder Ayana Avery (1,905).

Abigail Wilson’s 30 points on Tuesday was one short of her career high. It was the fourth time she’s scored an even 30.

Senior Mary Sobataka, who has a chance to reach 1,000 points later this season, made three 3-pointers and scored 16. She had 24 in West’s opening win against Lake Norman, while Wilson had 23.

West used pressure defense to unravel Davie (1-1) early. Sobataka made a three-point play and followed with a 3-pointer for a 14-1 lead, and the Falcons were up 14-3 after a quarter.

Poole hit back-to-back 3-pointers to push the lead to 43-17 in the third quarter. Davie needed 3-pointers from Emma Slabach and Morgan Lewis to get back within 54-29 after three quarters.

Sobataka made a 3-pointer for a 59-29 lead early in the fourth, and West expanded the lead to 40 points for a late running clock.

Whitley Arnott and Gabby Blabon scored six points each for the Falcons.