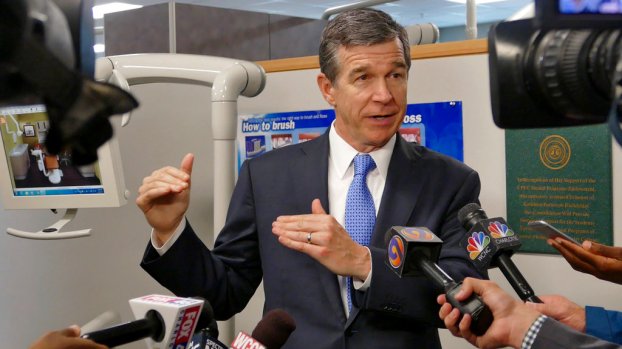 RALEIGH — Republican legislators have about 16 questions for Gov. Roy Cooper’s administration, and he’s refusing to answer.

Cooper and his Department of Environmental Quality skipped a recent legislative committee meeting on the state’s $58 million agreement with the developers of the Atlantic Coast Pipeline. Lawmakers want to know more details about how the agreement came together, and while the questions are obviously politically motivated, the governor’s administration needs to be transparent and provide answers.

What’s the big deal about the agreement? It was big news back in January, but since most North Carolinians have probably forgotten by now, here’s a quick refresher:

The utility companies building the controversial natural gas pipeline that runs along Interstate 95 got key environmental permits in January. On the same day those permits were announced, Cooper announced a separate agreement in which the companies would pay $58 million into a special fund to address the pipeline’s environmental impacts and help connect it to communities along the route.

Republicans questioned whether the payment was made in exchange for the permit — something Cooper has denied — and they diverted the money to fund schools along the pipeline route. Since the spring, legislators have been holding meetings about the issue, sending long lists of questions and requesting documents from the governor’s administration that are clearly public records.

The latest request was sent to the Cooper administration on Sept. 7. The deadline to respond passed two months later, and when the committee met recently to discuss “unanswered question,” the Department of Environmental Quality says they weren’t invited. It was a public meeting that anyone could attend, but no one showed up to answer questions.

Lawmakers were outraged, but those of us in the media weren’t surprised. Cooper pledged to be more transparent than his predecessor, Pat McCrory, but it hasn’t gotten any easier to get public records from the governor’s administration. Even a simple request like asking for the governor’s meeting schedule can take months.

Cooper’s people aren’t hiding their disdain for the legislature’s questions, with one spokeswoman calling it a “kooky whodunit caper.”

While it’s fair to criticize the legislature’s activities, refusing to produce public records — whether the person requesting it is a journalist, politician or random citizen — is disdainful toward the people you’re supposed to be serving.

Sure, Republicans are looking for a scandal they can use against Cooper in 2020. But even the three Democrats on the legislature’s pipeline committee say they want the information too. Rep. Becky Carney, D-Mecklenburg, suggested the committee should issue subpoenas to force administration officials to show up and answer questions. That seems to be the easiest solution, but for now the committee is opting to hire a Robert Mueller-like outside investigator.

The controversy over the $58 million is the weird political drama that has united environmentalists — who don’t want the pipeline built at all — and pro-business conservatives, who don’t think the utilities should pay the government anything.

The pipeline developers are making similar payments to other states on its route, so it’s entirely possible all normal protocols were followed and there’s nothing scandalous here.

But it’s reasonable to ask questions about the process. The Atlantic Coast Pipeline is a massive project spanning hundreds of miles. It will have benefits for the state’s economy but could also pose environmental hazards.

To ensure our regulatory process is working correctly, lawmakers and the public are entitled to details and documents that show how the state handled the permits. But if even the legislature can’t get information and members of Cooper’s own party are suggesting subpoenas, it’s clear that the governor’s administration is failing its commitment to transparent government.

How Democrats can write a fairer tax code

The Washington Post “Budget constraint” is econ-speak for the familiar concept that, in this world of finite resources, you can’t... read more