With honey instead of vinegar, Pelosi steadily inches toward the speaker’s gavel 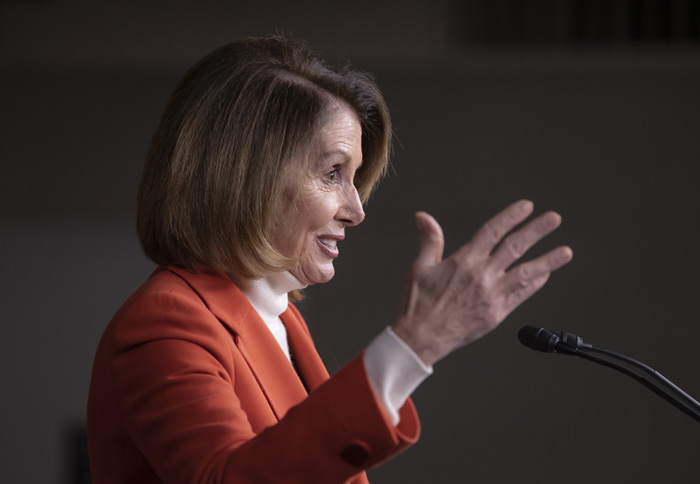 House Minority Leader Nancy Pelosi talks to reporters during a news conference at the Capitol in Washington on Nov. 15. J. Scott Applewhite/Associated Press

By Mike DeBonis and Robert Costa

WASHINGTON — Rep. Brian Higgins was one of 16 Democrats who signed a letter opposing Nancy Pelosi’s bid for House speaker. The New Yorker also called her “aloof, frenetic and misguided” earlier this year.

But Pelosi ignored all that.

Instead, the veteran House Democratic leader went about winning over Higgins last week, listening to the Buffalo lawmaker’s grievances and enlisting allies to convince him that he would see progress on legislation to expand Medicare.

The strategy worked: On Wednesday, Higgins pulled his name off the anti-Pelosi letter and threw his support behind the 78-year-old leader — moving her closer to reclaiming the gavel she first won more than a decade ago.

Pelosi’s relentless honey-over-vinegar approach to dealing with political headaches — which she learned at the foot of her father, former Baltimore Mayor Thomas D’Alesandro — has been critical to sustaining her grip on power since Democrats won the House majority this month.

She has personally courted disgruntled members in meetings and by phone while deploying her sprawling network to bolster her bid among both liberals and moderates, all but overwhelming her critics with her ability to outmaneuver them.

According to several aides involved in their discussions, Pelosi’s tenacity has rattled and weakened the ragtag group of rebel Democrats, mostly men, who have struggled to recruit a challenger.

But she has not yet shuttered their revolt. For now, they still might have the numbers to prevent her from winning the floor vote in January — 15 Democrats remain on the letter, at least four more Democrats said they will oppose her, and dozens more are publicly undecided.

Depending on the outcome of several uncalled races, Pelosi could potentially weather as many as 17 defections on the floor.

But the momentum is clearly with Pelosi. One potential challenger, Rep. Marcia Fudge, D-Ohio, dropped her plans Tuesday. And two leaders of the opposition, Reps. Seth Moulton, D-Mass., and Tim Ryan, D-Ohio, have found themselves under intense scrutiny by Pelosi supporters accusing them of sexism or disloyalty for pursuing a coup so soon after Democrats’ sweeping gains in the midterms.

At the moment, no potential Pelosi challenger is even close to preparing to jump into the race and champion their cause, according to Democrats involved in those talks.

Despite her reputation for political hardball, Pelosi has made gains over the past two weeks without resorting to overt threats, according to interviews with more than a dozen aides and members familiar with her efforts. The approach throughout has been purely transactional, rooted in her Little Italy upbringing — what she called “the D’Alesandro model” in her 2008 book, “Know Your Power.”

“You have to know how to count the votes, to anticipate how many people will vote for you,” she wrote. “And in order to turn out those votes, you have to be organized on every level.”

Pelosi has been in listening mode since Democrats won the House in the Nov. 6 midterms, building a majority that could reach 235 seats. Last week, she conducted a blitz of the major party constituencies — groups such as the Congressional Progressive Caucus, New Democrat Coalition, and Congressional Black Caucus, among others. Her allies, who include the incoming chairmen of every major House committee, have fanned out to solidify her support and discourage her opponents.

Rep. Jim Costa, D-Calif., a leader of the moderate Blue Dog Coalition who has voted against Pelosi in the past, said he has taken calls from House colleagues, senators and home-state bigwigs all urging him to get on board. He described a polite, professional meeting with Pelosi during which she made no threats but also gave no ground.

The Blue Dogs, like other factions inside the party, have been frustrated that Pelosi has shown little sign of relinquishing power after 16 years and making way for younger leaders. Pelosi has spoken of being a “transitional” speaker but has resisted making any firm retirement plan.

In another sign that Pelosi’s potential opposition is softening, a group that threatened to withhold its votes if it doesn’t get a set of House process reforms has started talking about accepting a partial victory and moving on.

The bipartisan Problem Solvers Caucus had called for significant changes that would curb the power of the majority party’s leadership, including requiring floor votes on certain bipartisan bills and opening the amendment process.

Pelosi unveiled proposed reforms that incorporated some of the group’s more modest suggestions but did not include several of its more ambitious demands.

On a conference call early last week, the Democratic members of the group discussed what sort of compromise they could accept, and co-chairman Rep. Josh Gottheimer, D-N.J., has been negotiating with Pelosi since then in hopes of reaching a deal.

There were plenty of other signs last week that her opposition is fizzling. Former President Barack Obama offered effusive praise of Pelosi on Tuesday, while Chicago Mayor Rahm Emanuel — who sparred with Pelosi while serving as Obama’s chief of staff — endorsed her Wednesday.

Rep.-elect Alexandria Ocasio-Cortez, a young and influential liberal who has challenged the party’s status quo, has trained her fire on Pelosi’s critics: “So long as Leader Pelosi remains the most progressive candidate for speaker, she can count on my support,” she tweeted Wednesday.

Meanwhile, down the Democratic leadership ballot, what could have been a messy free-for-all is looking more like a coronation: Rep. Steny Hoyer, D-Md., remains unopposed for majority leader. Rep. Diana DeGette, D-Colo., dropped a challenge to Pelosi’s preferred whip candidate, Rep. James Clyburn, D-S.C.. And Pelosi maneuvered to secure the No. 4 spot for Rep. Ben Ray Lujan, D-N.M., by creating a junior leadership post for his challenger, Rep. David Cicilline,D-R.I.

Former Republican House Speaker Newt Gingrich said Pelosi has a savvy understanding of what it takes to win high-stakes leadership elections, especially in an era in which institutional power is diminished.

“This isn’t Sam Rayburn’s Congress, where speakers could personally and institutionally intimidate people,” he said, referring to the Texas Democrat who was the longest-serving House speaker. “She is doing exactly what she needs to do, whether it’s inventing 16 meaningless titles so everybody can get something, or when people ask for a seat at the table, just building a bigger table.”

Perhaps no move was so crippling to her opponents as the deal she struck with Fudge, a blunt former chairwoman of the Congressional Black Caucus who had allied herself with Moulton and Ryan and openly pondered running against Pelosi.

Fudge said in an interview two weeks ago that she was not interested in a deal and questioned Pelosi’s commitment to diversity. “Nobody wants the status quo,” she said.

The next day, Fudge spent 40 minutes in Pelosi’s office in a meeting brokered by Rep. Elijah Cummings, D-Md., a respected elder statesman close to both women. When Fudge emerged, her remarks had lost their edge.

She told reporters that Pelosi is a “very, very good leader” and said the conversation “went a long way in trying to find some way that we can unify this caucus.”

“All the leader had to do was explain that she’d need to raise $135 million in a presidential cycle, which would require being on the road every day you’re not in session,” said former Congresswoman Donna Edwards, a former Congressional Black Caucus member who has spoken out on Pelosi’s behalf in recent days. “You’d also need to pass a legislative agenda that makes sure everyone’s priorities are met so they can run on something for re-election. And you’re going to have to negotiate with (Senate Majority Leader Mitch) McConnell in the Senate.”

Fudge folded Tuesday, agreeing to back Pelosi after securing a verbal commitment to give African-American women a more prominent role in leadership decision-making and to award her the chairmanship of a subcommittee on elections — a post that stands to give Fudge a unique pulpit on voting rights issues.

Higgins underwent a similar transformation. In an interview Nov. 16, he said Pelosi was “endangering our majority” by holding on to power and that a suitable alternative would emerge if she couldn’t win the necessary votes. But last Wednesday, Higgins said someone who won the speakership under those circumstances would be “undeserving.”

“If you want to be speaker, you gotta stand up, and you’ve got to fight for it — period, the end,” he said.

Higgins said assurances of a “serious good-faith effort” to advance legislation allowing Americans as young as 50 to purchase Medicare coverage helped persuade him, as well as a renewed commitment to a vast infrastructure spending bill. The deal, he said, was brokered over four days of phone calls with not only Pelosi, but also with Senate Minority Leader Charles Schumer and Rep. Richard Neal, D-Mass., the incoming Ways and Means Committee chairman.

Khanna recalled a meeting with Pelosi in late 2012, when he was pondering a run against longtime Democratic Rep. Mike Honda in a district in Pelosi’s Bay Area backyard.

Pelosi invited him to her San Francisco home where she quickly said that she would stand by Honda. But, Khanna said, she suggested as he left that she would hold no grudge if he ran.

“If I had waited around, I would never have been speaker,” he recalled her saying. “Power is never given; it’s always taken.”

Voter ID to make a comeback: Will it look…